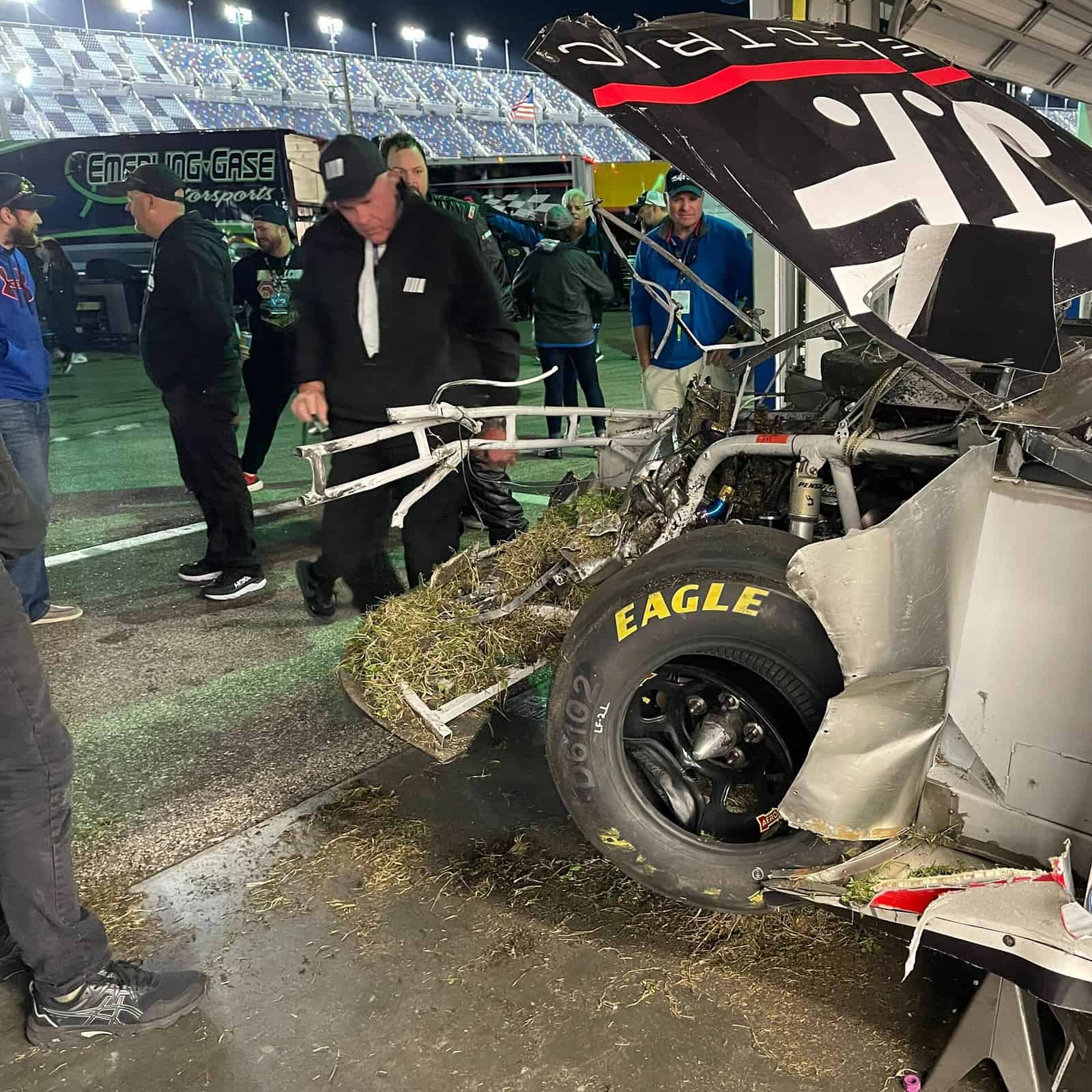 Myatt Snider entered the last lap contending for the win in the 2022 Beef. It’s What’s For Dinner. 300.

He left the track, moments later, airborne with the engine detached from his car.

Snider suffered just minor injuries after a terrifying wreck that sent his No. 31 TaxSlayer Chevrolet flipping and into the backstretch wall in a multi-car incident. Snider was battling for position, in the back half of the top 10 before Anthony Alfredo tapped the No. 31 as it slid in front of him. (Look for the wreck unfolding at the 20-second mark)

Big crash on the final lap at Daytona. Myatt Snider is okay. pic.twitter.com/ebTZFzfC8e

Snider emerged unscathed from the incident but was clearly shaken up as the car appeared to break in two while in the air.

Landing on the ground, pieces of Snider’s car were strewn everywhere on the backstretch. Luckily, he wasn’t hit by another vehicle but Matt Mills ran over the No. 31 engine as several cars made contact themselves to avoid the melee.

And for those watching on the backstretch? Some unwelcome souvenirs became stuck in front of them, a harrowing experience for the fans watching which included NASCAR Cup Series driver Bubba Wallace.

NASCAR threw the caution flag, ending the race and giving the win to rookie Austin Hill.

After emerging from the infield care center, Snider remained in a team golf cart while talking to the assembled media.

The second half of @MyattSnider after the race.

“It was violent. I saw sparks going everywhere.”#NASCAR #Beef300 pic.twitter.com/CLRxSev6jj

“I started to feel the car go right, and I’m like, ‘Crap. I might be going for a ride here,’ And sure enough I was,” said the dazed Snider. “I started seeing the race track and I’m like, ‘Hm, this is getting better as it goes… It was violent. I saw sparks going everywhere.”

Despite his scary crash, and complaints of a sore left foot, Snider still had a sense of humor about the situation.

“I’ve never actually flipped in a race car. That’s kind of wild to think. Huh,” said Snider in realization. “Well, great place to do it. At Daytona.”

Snider also knew about the detachment of his entire engine.

“I noticed the whole car was basically in shambles,” said Snider. “I looked forward when I got out of the car and I see the motor’s gone, it looked like the fuel cell’s almost gone. There was not much left of that race car. Yard sale.”

What he may not have known was that Matt Mills actually hit his engine after it detached from his car.

@mattmillsracing talks after hitting the engine of Myatt Sniders car in that wild crash.

“It was like hitting a car full on, but there wasn’t a car there.”#NASCAR #Beef300 pic.twitter.com/3wZGlkZJY7

“I didn’t even know I hit a motor. I knew we hit something big. I see Myatt up in the catchfence, and after he hit I thought we cleared him.

“It was like hitting a car full on, but I know there wasn’t a car there.”

It’s not the first time its happened. Well, back to the drawing board for the Cup cars.