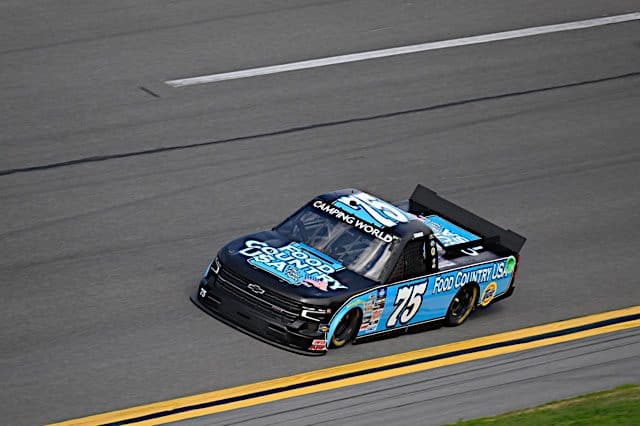 DAYTONA BEACH, Fla. — Parker Kligerman escaped the Big One by inches. And on the race’s final restart, he was one move away from having a legitimate shot at winning the NextEra Energy 250 at Daytona International Speedway.

Kligerman shoved Zane Smith to the lead in the outside lane on the first lap of a green-white-checkered restart utilizing a perfect tandem draft. The duo of trucks charged up the outside and Smith cleared Christian Eckes entering turn 3, allowing him to dive down to the inside lane. That left Kligerman trapped on the outside through what became the final set of corners when Jason White and Kris Wright crashed exiting the tri-oval, leaving Kligerman’s No. 75 Food Country USA Chevrolet fifth at the time of the yellow flag that ended the NASCAR Camping World Truck Series race on Friday night (Feb. 19).

“I was like, ‘alright, I’m going to push this as far as I can go,'” Kligerman said of his restart behind Smith. “And I went as far as I thought I could go. I saw the [Nos.] 98 [Eckes] and 99 [Ben Rhodes] break up on the bottom. I thought ‘OK, we have enough momentum, we’ll clear them both’ because I knew [Smith] was gonna do what he did; I would have done the same thing his position. I hope he can repay the favor somewhere else in the season. Maybe Talladega.

“But once I did that, I had to let go of him. But the 98 and 99 hooked back up as a sitting duck and then we got a big run and then the caution came out.”

In his victory press conference, Smith noted he wouldn’t be sitting there without Kligerman’s help.

“I definitely have a gift headed his way,” Smith said. “I don’t know what I’m going to send him, but he gave me a great push, and ultimately that’s what won me it.”

Very kind of him – make a donation to his favorite charity and I’ll take a favorable push at Talladega 🤙 https://t.co/6QwcW21GrP

Kligerman is notorious for his prowess on superspeedways, notching each of his two career Truck Series victories at Talladega Superspeedway. Those performances have earned him the respect of his competitors, though Smith was admittedly biased sitting in victory lane.

“I know there’s a lot of people that show up to these things and they don’t want to do them,” Kligerman said. “And I’ve actually gotten a little bit of a more sour attitude as of late to these races. You can get wrecked a lot. There’s a lot of weird moves happening. But tonight was great. The whole Truck Series, I mean, what a show. What a clean race that everyone put on until we had that wreck there.”

There is one more hidden nugget that Kligerman shared about a superspeedway racer’s mindset, one that Dale Earnhardt Jr. has pointed out over his career as well: think ahead at all times.

Kligerman was busy contemplating every move before he ever made it, trying to position himself to pounce at the most opportune moment. His plan was to clear the ThorSport Racing duo of Eckes and Rhodes entering turn 3 with Smith, then fend off a charge from the teammates in tandem while using that push to carry him to a win.

However, once he was caught on the outside, Kligerman knew his chances were shot.

“That sounds crazy to play it all out like that,” Kligerman said, “but I think […] superspeedway racers, the ones that win often, you see they always are plotting, always thinking about that last move and that’s what I thought I had played out in my head could happen and I wanted to keep pushing them, but I felt like I was gonna get in trouble.”

Nonetheless, Kligerman escaped Daytona with his fourth top-six finish in his last six Truck Series starts, a record made far more impressive by his part-time status over the past decade along with Henderson Motorsports’ limited resources.

“I’m very grateful for this because I don’t think I can explain how weird it is or how odd I am in this sport right now,” he said. “To be part time for eight years, 31 years old, no family money, no sponsors and yet I get the chance to show up here and run top five.”