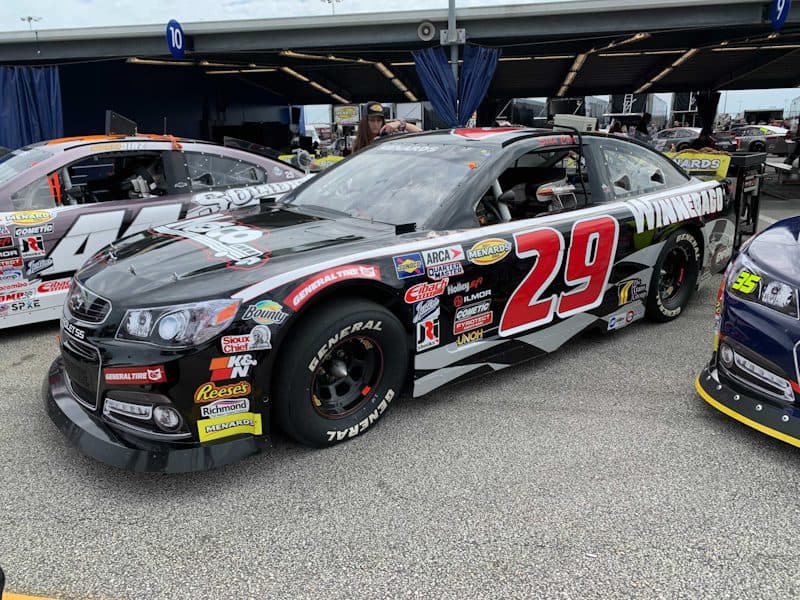 DAYTONA BEACH, Fla. – After avoiding much of the late-race chaos and placing himself up front, Sean Corr finished fourth in the ARCA Menards Series Lucas Oil 200 at Daytona International Speedway on Saturday, Feb. 19.

It was already a special finish for the New Yorker. It’s only his fifth top-five result since he began competing in ARCA in 2008.

But what was even more special about it was his paint scheme.

Like many ARCA Menards Series race teams, Sean Corr’s team is a small one.

Despite their small numbers, they would often have one paramount visitor to help out with car setups from time to time: 1989 ARCA champion Bob Keselowski.

“Bob was really good. He would always come by our shop,” Corr told Frontstretch. “I swear, it was whenever he knew lunch was cooking. He always had a setup.

“Bob was really important for our team. He helped us with any questions we had.”

At the beginning of the weekend, most of the field displayed tribute stickers adorned by Keselowski’s iconic No. 29.

Most of the ARCA field sporting the No.29 sticker on their rear post in honor of the late Bob Keselowski#ARCA #LucasOil200 pic.twitter.com/9pP2RjCF0z

With permission from the Keselowski family, Corr decided to wrap his car with the same iconic paint scheme as his late friend.

“We were so heartbroken when Bob passed away,” Corr explained. “We felt like we had to do something.”

When the ARCA cars took to the high banks of Daytona for the first race of the season in 2022, it was like looking back in time for the followers of the Keselowski lineage and longtime ARCA fans.

Only around 100 feet away, the Buick that the late Keselowski ran so many years ago rested in the Daytona fan zone, becoming the subject of pictures and videos alike from hardcore ARCA fans remembering the champion.

As we get ready to go ARCA racing at Daytona, we're thinking about Bob Keselowski today. 2️⃣9️⃣🏁 pic.twitter.com/VlhCxA1Ljt

On the track, however, Corr was racing the car’s doppelganger. Despite the competition of powerhouse ARCA teams like Rev Racing, Venturini Motorsports, GMS Racing and Kyle Busch Motorsports, Corr stayed up front at the end and raced the big teams.

They were the little team that could and did. Corr finished fourth and brought the No. 29 tribute car down pit road knowing he had honored his friend.

Caught up with @seancorr82_8_48 post race after winning in the late Bob Keselowski’s colors. Hear what he has to say 👇#NASCAR #ARCA pic.twitter.com/40HqT4bCiO

Keselowski made his relationship with Corr by helping him compete with the bigger teams of the series which garnered their friendship.

“He’d always be there to help us with any questions we had with setups. He made us a lot of great setups for here at Daytona.

“This may even be one of his notes we set the car up with tonight.”

Even in passing, Keselowski is still helping the little teams.