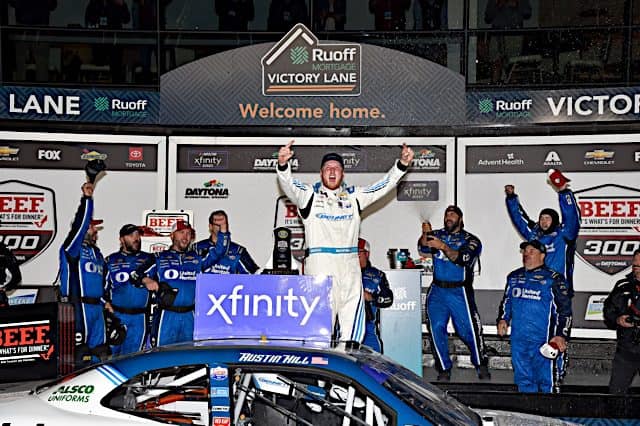 Welcome to the 2022 NASCAR Xfinity Series season! NASCAR fans were treated to a great one on Saturday evening (Feb. 19) that ended with NXS rookie Austin Hill taking his first series victory at Daytona International Speedway.

It ended just about as “Daytona” as anybody could expect, with Anthony Alfredo (No. 23) getting into the right rear of Myatt Snider, resulting in Snider’s No. 31 car getting turned on the last lap. Snider went end over end and caught air, which flung him into the catchfence on the backstretch. The engine was ejected during the crash, but Snider was able to walk out of the car afterward.

"Where is the engine?"

When the smoke cleared, Hill took home the cooler and tomahawk steaks in victory lane, with AJ Allmendinger, Noah Gragson, Riley Herbst and Justin Allgaier rounding out the top-five finishers.

Kaulig Racing had two of the fastest cars on track today, with Almendinger being able to bring his the closest to victory lane. His teammate Daniel Hemric, though, was arguably faster in the No. 11 AG1 Camaro. He took home the first two stages of the 2022 season but was forced to the back due to some late-race complications with a vibration.

Brandon Brown does not have a great car. He has no sponsors, but dang it, can the kid drive on superspeedways. Brown had some stretches in this one where he looked like one of the best wheelmen on the track, even leading 12 laps, a career high for the 28-year-old who won at Talladega Superspeedway last fall. He racked up 34 points at Daytona and a solid top-10 finish is a great way to start off his 2022 campaign.

JR Motorsports had a solid day for itself, with Gragson and Allgaier both notching top-five finishes in their first 2022 action. The best part? JRM can load both of those cars in the trailer and hit the road. Both drivers received little to no damage, avoiding the major wrecks that often decimate the series in the season opener, and that’s always a big plus.

Alfredo. Oh, boy. He didn’t exactly get off to a hot start in 2022, losing his right-rear window within the first 10 laps. Obviously, NASCAR forced the team to pit, and it took quite a while for them to find a replacement. He rejoined the pack two laps down and managed to sneak back onto the lead lap before the aforementioned Big One he was involved in. All in all, it can only go up from here for Alfredo and the Our Motorsports team.

Snider, or to be more specific: his car. After the crash, which Snider again was thankfully able to walk away from, the car sat motionless in the infield without an engine or front axle. Another panel piece was found after the race suspended high in the air on the net, photographed by Cup Series driver Bubba Wallace.

“I mean, I got ran over by a guy that just has no experience. You know, he got out of shape a few times (and) just wrecked us. I mean, you’ve got a lot of these inexperienced drivers out here that buy these good teams and fast cars and that’s what happens.”  – Jeremy Clements after the race, driver of the No. 51 Clements Racing Chevrolet

Caught up with Jeremy Clements after he was released from the care center.

“You got guys in fast cars that probably shouldn’t be in them.”#NASCAR #Beef300 pic.twitter.com/Ls0BzlguGP

Clements met the wall via Drew Dollar of the No. 18 Joe Gibbs Racing Chevrolet getting loose and, in all honesty, just shutting the door and slamming Clements in the process. He had a fast car early on, climbing the ranks in short succession in the first stage. According to Clements, the most frustrating part is being a small team and having to get a hold of another chassis.

It won’t be the last time a big team ruffles the feathers of a small one in NXS this season.

Hill was battling with Allmendinger for the lead when the caution came out, and according to Allmendinger, he was attempting to block both lanes during the closing seconds. Hill knew if he wanted a shot, he had to make a move, and he did just that. The rookie timed his shot perfectly and slipped past Allmendinger right before the caution came out to secure his playoff spot after the first race of 2022.

Scheme of the Night

We know this team is ready for some superspeedway action next weekend. Are you? 😎#XfinitySeries / @WhelenEng pic.twitter.com/ypBu0qc5KC

Sheldon Creed and the Richard Childress Racing No. 2 Chevrolet didn’t have a bad race by any means, and they had one of the sharpest rides in the field. I got some massive “Marlboro Man” or “Winston” vibes from it, making it the perfect mix of throwback colors and modern body lines.

All in all, the opener to the 2022 Xfinity season had its share of highs and lows. We saw the same kind of racing we’ve seen in the past, with thrilling two and three-wide action after restarts. In between? Yeah, you had a 190 mph arrow-straight line blitzing down the track, perhaps just a little too much until the big moments.

But when those big moments came, the action had race fans on the edge of their seat. We also saw some moments that made fans shake their heads, including Snider’s terrifying last-lap incident. All of that, though, makes the Xfinity series what it is: an action-packed series filled with developing talent that gives fans a chance to look at the drivers of tomorrow.

In the end, Hill prevailed, punching his ticket to the playoffs as early as possible and giving him and his new crew plenty of time to work out any extra kinks before playoff season is upon us. Will he be one of the names circled when it’s all said and done? At the very least, he’s got a head start over the rest of his competition in a deep 2022 NXS field.

Next up, the NASCAR Xfinity Series heads out west to return to Auto Club Speedway, where Harrison Burton took home the last victory at the track in 2020 driving the Joe Gibbs Racing No. 20 Toyota. They’ll go green at 5 p.m. ET with television coverage provided by FOX Sports 1.

Two quotes from AJ will stick with me. When asked about his well documented dislike, (that’s putting it mildly,) of Speedway racing. He said, “you don’t have to like something to be good at it.”
The second was when asked about the end of the final lap. ” I could have tried to block him, but it probably would have wrecked both of us,”

Someone should write that down & stick it to the inside of Logano’s windshield. He keeps throwing last lap late blocks with the same result. In last years 500, W/O the late race block. Keselowski would have won, he’d have finished at worst 3rd, & maybe 2nd. And Penske wouldn’t have had 3 totaled cars.

Logano admitted to a mistake this time. But proved he hasn’t learned anything from these particular mistakes.
I’ve heard it said that a smart person learns from their mistakes, and a brilliant person leans from the mistakes of others. Make of this what you will.

The only way to break someone of blocking is not to yield. I applaud anyone who doesn’t lift. If everyone did that all the time no one would block.