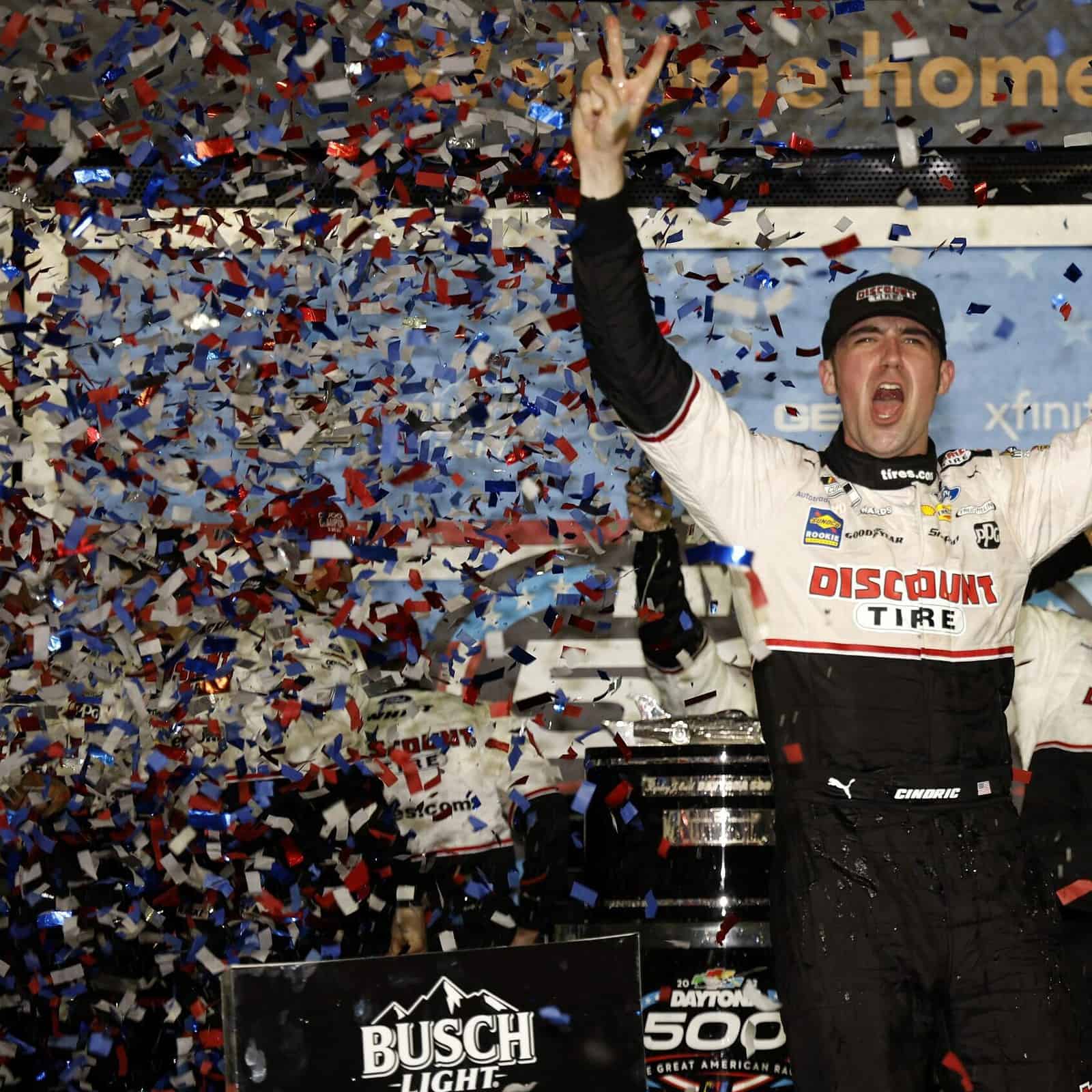 With Daytona International Speedway’s frontstretch lights illuminating them, the pit crew for Team Penske’s No. 2 Ford was slow and lacked coordination. They also didn’t even bother to put on safety equipment. One even wore a backpack.

As the No. 2 car sat on the frontstretch, it was pointed directly at the “O” in the Daytona underneath the flagstand. Minutes earlier, Cindric passed under it only .036 seconds before Bubba Wallace as the checkered flag waved.

In just his eighth career Cup start – and his first in Team Penske’s flagship car – the 23-year-old Cindric was the winner of NASCAR’s biggest race.

His celebratory burnout had shredded his rear tires and broke the car’s starter. He wasn’t going anywhere for a few minutes.

Sitting in the No. 2 cockpit as Cindric’s crew changed the mangled tires was a “good opportunity to reflect” for the Cup Series rookie.

There was plenty to think about.

Three months ago, the morning of Nov. 7, Cindric woke up at 4 a.m, stared off into space and experienced something he described as “like having a panic attack.”

Hours earlier, the Penske driver had failed to defend his 2020 NASCAR Xfinity Series championship at Phoenix Raceway. On the last corner, of the last lap, of the last race of the season, Daniel Hemric dove inside Cindric, made contact with him and forced his way toward the race win and title.

“I’ve never been in so much pain that I’ve wanted to vomit,” Cindric said of the aftermath of that finale. “That race at Phoenix has haunted me every moment of every day for the last however many months and it still will. I still lost. So it still sucks. But I think I’ve compared the two a little bit too much tonight because [the Daytona 500] is definitely on a different stage and it’s definitely a race that means a lot.”

Just four years ago, driving the much-maligned No. 60 Roush Fenway Racing Ford, Cindric made his first Xfinity Series start at Daytona. He only made it 10 laps before causing a crash on the frontstretch that collected eight cars and ended his day.

It was part of a discouraging first season on tour, a 17.0 average finish that left even the driver himself questioning his talent.

“You probably couldn’t pick me up from the care center [back then] and say ‘You’re gonna win the Daytona 500 one day,'” said Cindric. “I probably would’ve said ‘bullshit’.”

Cindric ended that year – his first of four in the Xfinity Series –  winless with just seven top-five finishes in Penske equipment.

But that was four years ago. The work he’s put in has paid off.

Travis Geisler, the competition director for Team Penske, is not surprised Cindric won so quickly on the Cup level.

“He’s a student of the game,” Geisler told Frontstretch. “I think he’s always learning, always figuring out how to be better, leaning on his teammates that are more experienced. And he came out here tonight and made this thing happen. It’s incredible, but it is kind of the expectation.”

Since 2018, Cindric has gone through a progression, from being seen as a driver who couldn’t win at all to a driver who could only win on road courses. Now, nine of his 15 NASCAR wins are on ovals including the biggest oval race of them all.

Though he’s solidified himself on the NASCAR stage, winning its biggest race in just his second attempt, there will be lingering, and undeserving, baggage for Cindric.

That his father, Tim, is the president of Team Penske won’t sway some who see his placement in the team as a benefit of nepotism. Even if that’s the case, Cindric’s 15 wins and NXS title should be more than enough to prove he’s worthy of the No. 2 car.

“I would say I’m not an externally motivated person and I’m not an externally intimidated person,” Cindric said. “My head is pretty much in the game 24/7. I don’t think about much, anything else, except for racing. I don’t have much of a social life. I hardly do anything else but go to the race shop and spend time either staring at my racecars or working out or spending time with my crew chief.

“For me, I guess I don’t have time for the noise. But if there’s anything I have left to prove, I’m not sure what it is.”

There will still be comparisons to the driver he just replaced.

As the laps wound down Sunday, culminating in an overtime finish, the shadow of Brad Keselowski loomed literally in Cindric’s rear-view camera. The man who delivered Team Penske its first NASCAR Cup title in 2012 was now driving the No. 6 Ford for RFK Racing.

He led a race-high 67 laps compared to Cindric’s 21. In overtime, Keselowski restarted in the row behind Cindric and Ryan Blaney. But as the checkered flag waved, Keselowski was left behind in a crash while Cindric barely won his first Daytona 500, something Keselowski has yet to do.

“I’m not going to sit here and tell you that I didn’t think [winning the 500] was possible, but certainly I don’t feel like I’ve replaced Brad in any sense of the word,” Cindric said. “He’s meant a great deal to our race team, not just Brad but you talk about Brad, Ryan, Bubba, a lot of the guys that I was having to fend off there at the end of the race are guys that have been in the sport for a while and have paid their dues and put themselves in position every time at these types of races.

“I obviously have to do my job and do what’s best for Austin and the [No.] 2 team, but I certainly have a lot of great perspective on what that means, what that hard work means, and being able to do it like in my second try certainly is exciting, but definitely not a stranger to knowing that I’ve got a lot of work, I have a lot of studying I have to do to put myself on that level every single week.”

When Sunday began, it’s likely that many of the fans in attendance or those watching at home knew next to nothing about Cindric or had never heard his name.

In fact, the signage on his garage stall during Speedweeks had his name misspelled when he first arrived at the track.

“Not throwing any shade, but hopefully we can get that right next year,” Cindric said with a laugh.

Now, for at least 24 hours, he’ll be one of the most talked about athletes in the country, if not the world.

“That’s a really heavy way to put it,” Cindric said when asked. “You’re probably not wrong, but at the same time, I guess I don’t think that much of myself, or at least I’ve never had that perspective.”

Cindric then returned to the theme of what caused him to have a panic attack three months ago after finishing second in the championship hunt.

“I think as far as what people need to know about me is, I’ve said it already, I’ll say it again, my dedication to what I do is pretty much all that matters to me,” Cindric said. “Whether if it’s the people I get to do it with or the life I get to live, I know how fortunate I am to get to do this, and I promise you, I don’t take it for granted.”

Our @DaveyCenter caught up with a pretty happy driver at @DAYTONA…