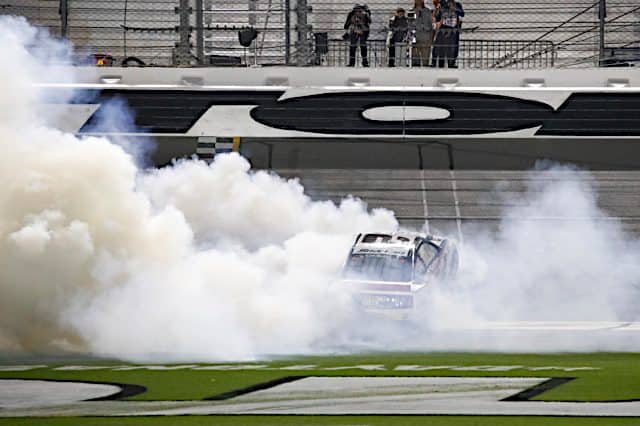 After a flip, multiple multi-car crashes and late-race chaos, Austin Cindric emerged as the 2022 Daytona 500 champion on Sunday (Feb. 20) as he survived final-restart challenges from teammate Ryan Blaney, Brad Keselowski, Bubba Wallace and others as the field crashed through the Daytona International Speedway trioval behind him.

Cindric’s most recent Cup start, at the Indianapolis Motor Speedway road course, marked his best career finish in NASCAR’s premier series in a part-time effort in 2021, and he immediately improved on it in his full-time debut with Team Penske.

“Oh my God,” Cindric said after doing his burnout at the start-finish line. “[…] Oh my God, I’ve got so many people to thank, first and foremost Roger Penske. Happy birthday. Oh my gosh. I appreciate Ryan being a great teammate, obviously, he wants to win this one, but I’m so pumped for [sponsors] Discount Tire, Menards, Ford, everybody worked so, so hard with this Next Gen car, through this whole process.

“I’m so excited. This makes up for losing a championship the last race I did.”

The 2020 Xfinity Series champion was running well in the 2021 500 when he was caught up in the fiery last-lap crash. A crash ended the 2022 running, as well, but this time he was well ahead of it. Additionally, Cindric became the second-youngest driver to ever win the Great American Race, after Trevor Bayne in 2011.

An uneventful first 20 laps featured the field alternating between two-wide and single-file racing, with Kyle Busch and Brad Keselowski swapping the lead and staying out front for stretches of laps once polesitter Kyle Larson dropped back early.

Green-flag pit stops were marred by a wheel issue for Kaz Grala, which brought out the caution. The No. 50, in the Floyd Mayweather-owned The Money Team’s NASCAR debut, the wheel let go and put Grala in a hole. Burton and Kurt Busch narrowly avoided the tire as it bounced across the track, while Chase Briscoe spun as the group of cars he was in checked up in reaction to the incident. Greg Biffle had an earlier issue in his debut with NY Racing, with fuel proving a problem for the No. 44.

Another caution flew when Justin Haley had a wheel issue, and around the same time Ryan Blaney spent an extended stint on pit road with a similar problem.

The Big One finally hit with mere laps remaining in stage one, where a squirrelly Harrison Burton spun after an errant push from Keselowski. Burton went sliding and the car lifted after contact from Denny Hamlin, sending the rookie’s Wood Brothers Racing car up and onto its roof.

Harrison Burton gets upside down at Daytona. He's okay. pic.twitter.com/oVi4UrJd1Q

Burton’s blowover concluded with the car tumbling back onto its wheels, only upside down the one time, and grinding to a halt. William Byron also took a huge hit into the inside wall, while Ross Chastain, Alex Bowman and several other drivers suffered damage. Kyle Busch was involved, but avoided hitting anything as he spun and continued. Martin Truex Jr. won the stage under caution.

Things calmed down for just about the entirety of stage two, with Blaney out front for quite some time as the field decided to play it safe and run single-file. Briscoe and Daniel Suarez each had issues on green-flag pit stops, with the pair suffering a missed pit stall and speeding penalty, respectively.

Keselowski was back out front for a while before Larson got by, the No. 6 then going back around Larson for the lead with Joey Logano in tow. Logano eventually got to the lead, but Truex drag-raced the No. 22 to the start/finish line to sweep the stages.

Tyler Reddick went around after contact from Jacques Villeneuve with less than 50 laps left, sending multiple cars spinning into the trioval.

Caution is out with less than 50 laps to go at Daytona. pic.twitter.com/3gROzztXRc

Reddick’s race-ending damage put the No. 8 behind the wall, while Truex suffered a blow to his solid day. Truex, Logano and Kurt Busch‘s crews worked on their respective cars after the crash.

Two-wide racing made up a majority of the field immediately after the restart, with Team Penske stablemates on the inside in Blaney and Cindric and Toyota allies on the outside in Wallace and Kyle Busch showing the way.

An outside-lane charge, albeit with some close calls, propelled Ricky Stenhouse Jr. and Chris Buescher to the front as the Toyotas dropped back, and the field quickly settled into single-file racing.

Another wreck was triggered when Kevin Harvick spun heading into the trioval, sending Noah Gragson into the outside wall. Larson made contact with Gragson as Todd Gilliland also hit the outside wall head-on. Erik Jones and Chase Elliott were also involved.

Stenhouse and Cindric led the field to green for the restart with six laps remaining, but another caution quickly flew when Stenhouse was spun into the outside wall by Keselowski and collected the No. 6’s teammate in Chris Buescher. Wallace also received some contact, while David Ragan scooted through a third straight wreck.

On the overtime restart, Blaney and Cindric linked up on the bottom while Keselowski led the top lane, and Wallace gave Blaney a shot on the last lap that propelled the Nos. 2 and 12 ahead of the No. 6. Blaney moved to the outside and he and Cindric nearly wrecked as Wallace charged to the inside, but Cindric held on to win the race with Wallace, Briscoe and a gaggle of spinning cars following him.

Retweet to congratulate Austin Cindric on his #DAYTONA500 win! pic.twitter.com/1MsVdRRMIJ

“I’m surrounded by great people, that’s all there is to it,” he added. “I know there’s gonna be highs and lows, being a rookie in a field of drivers this strong. I’m just grateful for the opportunity, excited for the climb the mountain we’ve got ahead of us on the [No.] 2 team, but we’re in the playoffs. That’s one good box checked, but my gosh, what an awesome group of fans. What an awesome racecar, just really thankful.”

At least cindric didnt luck into it. He was upfront and competitive the whole race and had another fast penske ford.

Don’t give Cindric the win just yet. I sure the “rules” committee is going over the “rule” book to see if they can get the second place finisher the win. And we know why.

What did bubba have to say in the long video just above this, I had the mute on.

Wow !!! These Penske drivers will do anything to win. Even take out teammates. Last year Logano takes out Keselowski. This year Cindric takes out Blaney. Blaney needs to stop being Mr.Nice Guy. He helps out Cindric and then gets stuffed into the wall when trying to challenge for the win.

So Cindric is supposed to stick his hand out the window and wave him on by??