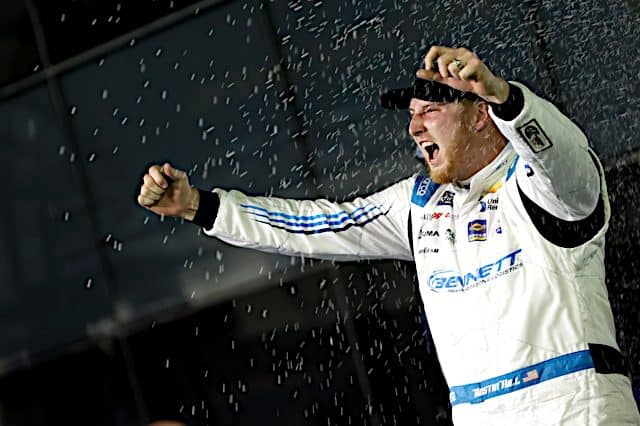 DAYTONA BEACH, Fla. — Austin Hill won his share of races in the NASCAR Camping World Truck Series, but he never made it to the Championship 4.

After four years of full-time campaigns there, eight wins and three years with championship-caliber Hattori Racing Enterprises, Hill took a risk and left for the NASCAR Xfinity Series.

On the other side of that leap was a ride with Richard Childress Racing. One start is in the books, and well … what a first impression.

Hill eked in front of AJ Allmendinger on the back straightaway during the final lap as Myatt Snider went airborne and into the catchfence to bring out the final caution, handing the 2022 Beef. It’s What’s for Dinner. 300 victory to Hill.

The 27-year-old Georgian had been eager to move up to the Xfinity Series for years. To finally do so on a full-time basis with a competitive team — and win in their first start together? That’s just more proof to Hill the timing was right.

“We’ve talked in [the media center], where I’m like, ‘Hey, I want to move up, but I want to do it on my terms,'” Hill said. “I want to do it with the right team, the right people and organization around me. I feel like Richard Childress and Richard Childress Racing is that type of organization that I wanted to be around because they’re very family oriented. And that’s what I love about this team. They’re always there for you.

“I think that’s why this organization just works for me and hopefully, we can work together for a lot of years to come.”

With the victory comes a spot in the playoffs — the time of year that has “eaten [Hill] alive” throughout his Truck Series career. After three years of frustration late in the season, it’s fair to ask why 2022 will deliver different NXS results? The answer, Hill said, is experience.

See also
AJ Allmendinger Comes Up Just Short in Xfinity Race at Daytona: 'We were about 20 feet away'

“On the truck side, it seemed like we were always really good throughout the season,” said Hill, who finished a career-best fifth in Truck Series standings in 2019. “Then, when it came down to the last part of the playoffs, we’d miss it a couple points here and there [not] making it into the final four. So, I’ve definitely learned a lot over the last three years going into the playoffs that I think I can take forward into the Xfinity Series.”

Hill is eager to prove himself. His car owner, Richard Childress, doesn’t seem to need much more convincing at this point.

“That’s the reason we brought Austin over. We knew that he can win,” Childress said. “I’ve been watching his talent for several years in the trucks and even watching him in some of these Xfinity races. And I knew that he has the talent to win. And this won’t be the last one. I’ll predict that.”

Hill will have his next shot on Saturday, Feb. 26 at Auto Club Speedway in the Production Alliance Group 300. The race will run at 5 p.m. ET with television coverage provided by FOX Sports 1.

That strategy works for every event at Daytona and Talladega:get in front on the last lap and hope for a caurion flag to freeze the field. It works out a lot.