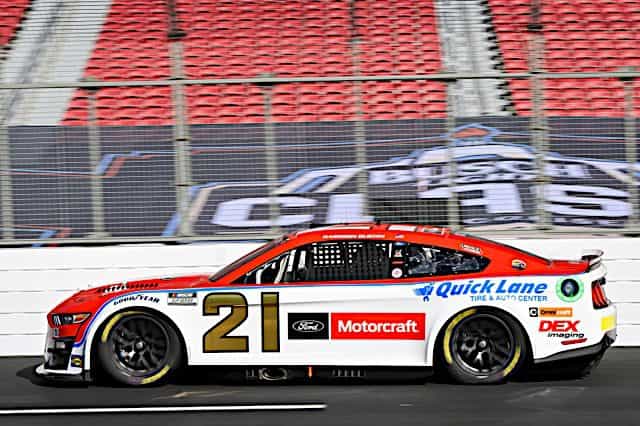 A couple of cautions dotted stage one, but things picked up in a hurry as the segment wound down. Double-file racing prevailed with rookie Harrison Burton leading the outside lane. Burton’s No. 21 was visibly squirrely, and it culminated in Brad Keselowski pushing the Wood Brothers Racing car just the wrong way and sent him spinning. Burton’s Ford went sideways, hit William Byron and then was hit by Denny Hamlin, exposing the underside of the No. 21 and sending it airborne.

Harrison Burton gets upside down at Daytona. He's okay. pic.twitter.com/oVi4UrJd1Q

“These bumpers don’t line up as good as the old ones did,” Burton said once he was released from the infield care center. “I’m not questioning Brad’s ability, but I think he just got a little wide there. […] It’s easy to say, ‘Oh, I just got a bad push and spun,’ but I feel like the people that always get better are ones that can look at themselves and learn from it, so that’s what I’m going to do.”

The car landed on its roof and then rolled back onto its wheels, grinding to a halt. Byron took the second-most significant impact, with the No. 24 slamming the inside wall head-on.

William Byron also discusses his view of the incident.

“You’re just pushing and shoving, and it seems like (Burton) out of control before that.”#NASCAR #DAYTONA500 pic.twitter.com/OSrAnLuDxg

“You’re just pushing and shoving, and it seemed like [Burton] was out of control the lap before that, so I was a little bit nervous about it,” said Byron.

Byron, Hamlin, Kyle Busch, Christopher Bell, Ross Chastain and Alex Bowman were all involved as well. Chastain, Burton, Byron, Hamlin and Bell all had their races ended by damage, while Bowman underwent repairs and Busch hit nothing, the No. 18 able to continue.

Hamlin was less than impressed by Keselowski’s pushing.

Caught up with Denny Hamlin after the incident also.

“We could see they were going to wreck, but Brad was just insistent on pushing at all costs.”#NASCAR #DAYTONA500 pic.twitter.com/HfALHXlVdm

“Once we had that restart, [Keselowski] got back in the mix,” Hamlin said. “He was pushing [Burton]. [Burton] was trying to hang on but he was out of control for a few laps, but [Keselowski] just kept pushing. We could see they were going to wreck. Brad was just insistent on pushing at all costs.

“Obviously, it was over-aggressive. It caused a wreck. I saw it coming. That’s the hard part.”

The crash marked the second flip in less than 24 hours, after Myatt Snider‘s terrifying liftoff into the catch fence on Saturday (Feb. 19) night in the Xfinity Series event.

Hope someone puts Brad K in the fence. He likes to point fingers but he’s a spook. Old school racers know what that is.

Last edited 4 months ago by TiminPayson
1
-1

Way to go Brad. Took out the leader with 6 to go. Punk ass.

After the way he was bumping in the 150 miler I said he would cause a wreck in the 500 and he caused 2 that I saw when I was watching. The first three times I tuned in I got commercials.

What is with the tires and wheels? Logano couldn’t move in the grass and he got on pavement and the wheel just spun while the tire sat there. Well, back to the drawing board.

NA$CAR will blame Goodyear but we know the real problem.

That wreck and several others like it appeared to be triggered by side drafting From The bottom lane.