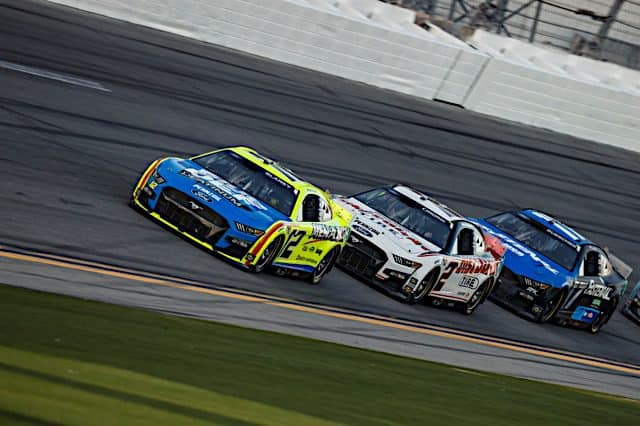 For better or for worse, Ryan Blaney is a company man.

That character trait was on full display during and after the overtime finish of Sunday’s (Feb. 20) Daytona 500.

For the final two laps around Daytona International Speedway, Blaney stayed committed to racing behind his Team Penske teammate and race leader Austin Cindric, even as they jockeyed with former teammate Brad Keselowski as well as Bubba Wallace.

Blaney didn’t make a move for the lead until it was potentially too late.

As he and Cindric raced through the frontstretch’s short chute heading toward the tri-oval, Blaney moved his No. 12 Ford to Cindric’s outside. But Cindric shut the door, quickly gliding right and making contact with Blaney that slowed him down and ultimately resulted in the No. 12 crashing just after the checkered flag.

Instead of celebrating his own win in victory lane, Blaney finished fourth and visited Cindric’s celebration.

“I will say I think it was in his best interest to be able to help me,” Cindric said. “I thought the bottom was the dominant lane on restarts. It put him in a position to be second behind the leader and have a shot coming off of turn 4.

“That’s usually all you can ask for from a teammate, to let him give you a shot and take his own when he has it.”

In the end, Blaney was at peace with his decision not to go for the win earlier.

The company had won.

It wound up being the perfect gift for Roger Penske, whose 85th birthday fell on race day.

“I wanted to try to win the race for Roger Penske,” Blaney said. “Whether that was me or another car, that’s what I was doing, and I didn’t want to make a move too early because that throws a big chance out the window.

“It’s just one of those things. It didn’t work out. We still ended up fourth, but I don’t know another perfect position we could have put ourselves in to win the race.”

I initially wanted to roll my eyes at this.

Surely, Blaney could have found an earlier opportunity to get the lead.

But then I thought about it.

If anyone knows what it takes to win on a superspeedway, it’s Blaney. He has three victories — two at Talladega Superspeedway by a margin of victory of .007 seconds and one at Daytona — to show for it.

Maybe he was right.

Team Penske wanted to avoid a repeat of the scenario that saw Keselowski and Joey Logano leading the field on the last lap, only to crash entering turn 3 and allow Michael McDowell to claim the victory.

“We talked about that a lot, as you would expect we did after the race last year,” Penske said Sunday night. “And I said, ‘Look, the best man wins at the end. I think we’ve got to work together.’ […] At the end, I felt that with two cars up front and the speed we’d had all during the race — and obviously interesting we had six Fords up there and one Toyota, and Bubba certainly was hungry to win, too.

“So we had to execute, and that’s what we did.”

For Travis Geisler, Team Penske’s competition director, that execution doesn’t have to be flawless.

“You don’t have to be perfect, you just have to be better than the rest,” Geisler told Frontstretch as Cindric’s victory celebration unfolded near the start-finish line. “Our two guys at the end, I can’t thank Ryan Blaney enough. That guy is is the best teammate I’ve seen work on the speedway ever, he just is always thinking about how to get the team to win.”

What does it take to be a good teammate in one of the most unpredictable forms of racing in NASCAR?

For Penske, it’s not just about being a loyal company man.

“I think it’s the person. I think it’s the human being himself,” Penske said. “I think we’ve taught a lot about racing. (Blaney) was a racer when he came in, and we’ve given him good equipment. And he listens, and I think he knows his teammates can help him, and vice versa. And I think he has that as his M.O.”

I like Ryan but nice guys finish last. But he couldn’t touch the new golden child at Penske. Cindric’s father is Penskes right hand man, the kid will get anything he wants and always the best. The driver line at Penske forms behind him.

We’ll find out if Austin has a chance to help Ryan win.