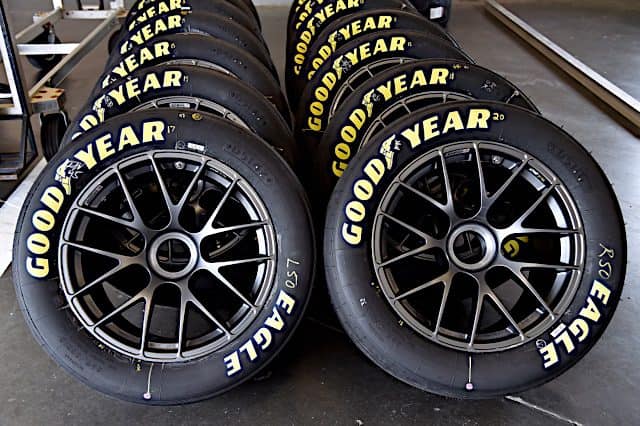 Did You Notice?… Tires threatened to derail the Daytona 500 debut of the Next Gen car? Two obvious failures occurred over the course of 500 miles: Kaz Grala and Justin Haley saw their wheels come off at full speed. Thankfully, neither one turned into a serious incident as both drivers were able to continue after repairs.

But the thought of a wheel coming off like that, considering the tight pack racing of Daytona International Speedway is a little disconcerting. The problems came two days after NASCAR confiscated wheel sets from Brad Keselowski’s RFK Racing team and his former employer, Team Penske. Officials claimed “something improper” was being done to the tires during race preparation.

The accusations have been met with a strong response, unusual for most NASCAR penalties that are more tacitly accepted these days rather than working through the appeals process. Instead, both RFK and Penske focused on potential concerns they discovered prior to the race on Sunday.

“We had contacted NASCAR a week before and said that the wheels we were getting were not all the same,” Penske said after celebrating Austin Cindric’s Daytona 500 victory. “We felt we needed to modify the holes where the drive pins go. We didn’t really get any feedback, and at that point, we went ahead and opened the holes up.”

“Not a performance-related item,” Keselowski added. “Once they see all the data we have behind it, it shouldn’t be an issue… we made some safety changes to the wheels.”

Those comments look prophetic when you consider how the race played out. It wasn’t just these two organizations; teams like Martin Truex Jr. lost time in the pits struggling to get the lug nut on right. (Remember, we’re down to just one; tires should now be replaced faster than two full cans of fuel). With wear not a major issue at this track, some crew chiefs planned fuel-only stops in order to avoid the risk of having to change them.

But the most damning evidence of a larger problem occurred in the winner’s press conference, when crew chief Jeremy Bullins admitted his team pulled a set of Cindric’s tires from being used.

“We took a set of wheels out of the rotations today,” he explained, “Because we made some tools to check them to make sure they were what they were supposed to be … we were afraid they might not go on [the car].”

Despite that catch, the wheels issue could have kept Cindric from winning the race. Remember, the No. 2 car spun Chase Briscoe as teams checked up over Grala’s loose wheel back on lap 42.

Looking ahead, we’re now heading to a track in Auto Club Speedway notorious for its old asphalt ripping tires to shreds over a green flag run. You’re not going to have the option to go fuel only on a pit stop, meaning if we really have a problem here? It’s going to show up in short order.

There’s also the issue of Grala and Haley’s four-race suspension penalties. Under the NASCAR rulebook, any tire that comes off under race conditions is subject to suspensions for the crew chief, tire changer and tire carrier similar to this incident that happened with Kyle Busch in 2017. But should those organizations, both new to the Cup circuit, be subject to severe penalties when it was a NASCAR-sanctioned “part” that created the issue?

The good news from Daytona is that any other mechanical issues with the Next Gen car failed to materialize. Just one team, underfunded NY Racing, went behind the wall for a non-crash problem (something got stuck in Greg Biffle’s fuel line). All the engines made it 500 miles along with axles and brakes, parts that were cause for concern after a couple of weird DNFs out in Los Angeles.

A new car always comes with at least one curveball you don’t expect. This week will be a real test of open communication between NASCAR and its teams, diagnosing the issue and coming to a resolution that keeps all parties happy – and safe.

Did You Notice?… The way Ford worked together like superglue in the draft? It resulted in seven cars running inside the top 10 despite wrecks that wiped out a few of their top contenders (Joey Logano, Kevin Harvick). The way their teamwork clicked in pack racing isn’t unusual; it was the theme of the 2021 Daytona 500 before Brad Keselowski and Joey Logano tangled on the final lap of the race.

The other manufacturers are suffering from two completely different sets of problems. Let’s start with Chevrolet, which had the most cars of any make in the field (18). That should have given them a decided advantage, but think back a second; when was any time the Bowties found themselves bound together in a pack?

Ricky Stenhouse Jr. was a contender but often on his own in the lead pack, relying on Fords to help him out. Hendrick Motorsports, which lost cars to wrecks throughout the afternoon, never hooked up together effectively. It felt like Chevys were disorganized and pursuing an every man for himself scenario even if that wasn’t their intent.

As for Toyota? They learned about strength in numbers. When you support only six cars out of 40 in the field, it’s easy for multi-car wrecks to decimate your ranks. By the end, just three were left on the lead lap and all of them (even second-place finisher Bubba Wallace) had some sort of damage.

If Toyota doesn’t want to put their money behind more teams the rest of the year? That’s their right. But I’d consider at least a few part-time helpers for the pack races. It looks like a lot of new owners testing the waters will run a limited schedule with these tracks in mind and it’s a great opportunity to try and forge future relationships.

Did You Notice?… Rick Ware Racing might be a team to watch? Yes, you read that right. So far this season, the reconstructed, streamlined two-car organization has run better than anyone expected. Ryan Preece won a Last Chance Qualifier in the Clash at the Coliseum running their No. 15 car; David Ragan followed it up with a top-10 finish in the Daytona 500.

But the title for Most Improved thus far in 2022 goes to Cody Ware. Ware posted a career-best 17th-place finish in the Daytona 500; he finished just one lap off the pace. That seems somewhat ordinary until you consider it’s his second top-20 finish in 56 career Cup starts. It’s a driver whose career average finish is 32.3, collecting more DNFs (18) than lead-lap finishes (five) with equipment that was seriously underpowered and underfunded.

RWR’s alliance with Stewart-Haas Racing is out to change that this season. Are they visiting victory lane anytime soon? Let’s not get too far ahead of ourselves. But early returns look good.

The headline’s misleading, the writer needs to learn the difference between “tires”and “wheels”. NASCAR did not have a problem with “tires”, there were some isolated issues with wheels. The officials didn’t find anything improper with tires, their issue was with changes made to some wheels. Cindirc’s crew chief didn’t pull a set of tires, he pulled a set of wheels, which may or may not have had tires on them at the time.

I know people don’t like change, and a lot of fans didn’t like the switch to single lug wheels, apparently including the writer, but there is nothing wrong with them. Center lock wheels have been in use on race cars and street cars, for over 100 years. They’re perfectly safe, and no more likely to cause problems than the antiquated 5 lug steel wheels that NASCAR had previously used.

Since center lock wheels have been in use for so long in other forms of racing, I’m puzzled as to why there is an issue with them in Nascar. Are they using an unusual wheel size? Using a new manufacturer? Would love some answers.

BBS has made wheels for decades. They know what they’re doing.

The wheels being used in NASCAR have holes in the backside, that correspond to studs on the hub. If the wheels aren’t seated properly on the studs, then it can move or cause other problems, not unlike when a 5 lug steel wheel isn’t seated right, from a lug nut being trapped behind the wheel. Also just like on 5 lug wheels, it’s possible to cross thread the center lug, either causing the wheel to come loose, or not coming off during a tire change, something that also happens with 5 lug wheels too.

Nothing’s perfect, and that includes center lock wheels. There’s bound to be teething problems with anything new. In a perfect world, these problems would turn up during testing, but no amount of testing can fully duplicate the stresses put on parts that actual racing does.

You would think the reporter could get the difference between a wheel and a tire right.

So NA$CAR brain trust in their infinite wisdom decides to get rid of inner liners. I guess they’re not considered important enough, safety wise.

Wasn’t the idea of inner liners to make the cars safe in case of a tire failure. They go on and on about how safe the car is. But it had better be now that there’s no safety in the tires.

I was being sarcastic. Every decision in NA$CAR is based on “How much will it cost us?”

If the problem with the wheels is that not all of them fit properly couldn’t the teams try every tire on a mock wheel hub before the race to make sure they fit properly? That might not solve the problem others had with the wheel breaking, but at least they could be confident that the parts will fit together properly.

I agree with the others regarding the inner liner. It seems ill advised and counter-intuitive to get rid of that safety feature when we have all seen them work for the last 3 decades. How many cars have been saved through the years from a violent hit with the wall as a result of a blown tire?

The Next Gen car is terrible in my opinion. It looks terrible, the numbers look terrible, and they sound horrible. The wheels (rims) look terrible as well, and the single lug is truly a disgrace. The 5 lug blacked out 15” rim is the traditional trademark of the sport and the change has been a real disappointment to millions of fans. I’m in my early 40’s and It’s truly been amazing to me to watch NASCAR shoot themselves in the foot over and over for so many years. It has become a joke within many circles of friends and it breaks my heart. But now they will try all these gimmicks to win back fans. Let’s see if it works? Because in my opinion, and from what I’ve seen, they have run off at least 70% of their base over the last 10-20 years….Idiots
NASCAR is their own worst enemy

The joke is on NASCAR the 5 lug nuts should have never left the series period !!!!