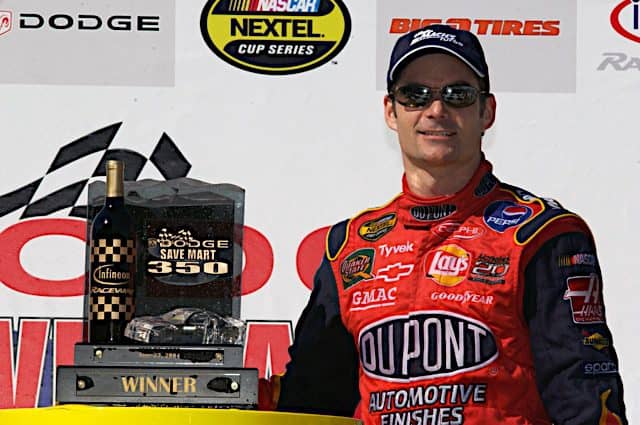 NASCAR heads west to California this week, with the Cup and Xfinity series paying a visit to Auto Club Speedway in Fontana. Kyle Busch is the winningest active driver at the 2-mile oval, one of the two tracks the Cup Series will visit in the Golden State this year, the other being Sonoma Raceway in June.

Aside from the Busch Clash that was held at the Los Angeles Coliseum earlier this year, which was presumably a one-time trip, those are the only two tracks where any of today’s drivers have run a Cup race in the state that for many years defined American car culture.

But that wasn’t always the case.

California was the stuff of dreams in NASCAR’s early days, holding the magic of Hollywood and the pulchritude of the coastline and forests. The sport was never immune to the lure.

Before the modern era saw a shortened schedule and more uniform point systems, the Grand National Series, Cup’s predecessor, often sanctioned multiple races in the same week, all over the country. That meant that drivers that should have been household names since the sportʻs inception didn’t always make the trip to every race (and didn’t need to in order to win a title), and local stars had a chance to shine on the biggest stage on town.

And shine they did.

See also
Dropping the Hammer: Ryan Blaney Stuck to the Plan in Daytona 500

From the early 1950s into the early 60s, California boasted a dozen tracks that held at least one points-paying event at its top level. Only one of those early tracks, the twists and turns of Riverside Raceway, survived beyond into the modern era. The rest have faded into time and memory.

There are two ways to look at NASCAR’s history in California: tracks and drivers. They’re intertwined, of course, especially in those early days.

The eleven tracks that make up NASCAR’s earliest history also saw a host of locals showing up and taking home trophies. Those tracks include:

One of three NASCAR-sanctioned tracks in Gardena, which sits between Los Angeles and Long Beach, Ascot Park is one of the two that held Grand National races. The half-mile oval hosted three Cup events between 1957 and 1961. All three winners were California drivers: Eddie Pagan, Parnelli Jones, and Gardena’s own Eddie Gray.

Bay Meadows, a one-mile dirt track not far south of San Francisco, hosted three Grand National races, 1954-1956. Two of those saw the trophies go to the household names, Hershel McGriff and Tim Flock, but Pagan took one for the locals.

Another one-mile dirt track, the Fairgrounds raced Grand National six times between 1956 and 1961 but didn’t attract the big Grand National names of the day. Gray took two of his four career Grand National victories there. Dany Graves, Jones, and Jim Cook were the other local heroes to win, along with the lone out-of-state winner Lloyd Dane.

The second of Gardena’s tracks to host the top series, the .5-mile dirt bullring held three races in 1951 and another in ’54. Marshall Teague took one of them, with Californians cashing in in the other three with Lou Figaro, local driver Bill Norton and John Soares.

This half-mile dirt track hosted three Grand National races in 1951 and 1960-1961, won by locals Danny Weinberg and Marvin Porter along with Hall of Famer Fireball Roberts, who won the final GN event at the track.

Hall of Famer Herb Thomas won the only GN race at the half-mile dirt oval in 1956.

Natives Marvin Burke, Dick Rathman and Danny Letner were the only drivers to conquer the half-mile dirt circuit between 1951 and 1954. Rathman was the only one to compete for championships at the time.

Thomas and Dane ruled the roost in two events in 1956 and 1957. This was the northernmost of the California tracks, a dirt oval .625 miles in length.

Porter survived a race of attrition in the half-mile dirt track’s only Grand National appearance. Only five of the 22 starters were still running at the checkers.

One of only two California road courses in the early days, the 2.5-mile track hosted two GN events, with Chuck Stevenson holding off  Californian Marvin Panch in 1954 and Panch taking the trophy the following season.

NASCAR’s modern era has seen just four Golden State tracks: Ontario Motor Speedway, which hosted Cup races from 1971-1980; Riverside International Raceway, a road course which often held the season-opening race and saw NASCAR’s top series from 1958 until 1988; Sonoma Raceway, which took over the road course scene in 1989; and Auto Club Speedway, which has hosted the Cup Series since 1997.

Riverside boasted some California-born winners in its early days. Gray and Dane won the first two Grand National events on the track, and Jones has a win, while Ray Elder took two.

The biggest local name to claim victory (five times) at Riverside was Dan Gurney, a road racing legend whose resume included wins in Formula 1 and the 24 Hours of LeMans. Gurney’s NASCAR wins came for some of the biggest teams of the day: Holman-Moody Racing and the Wood Brothers. While he made a few starts at Daytona and one at Atlanta, his five wins in nine starts at Riverside, in his home state stand out.

The modern era ushered in a different approach to racing at the Cup level. Teams didn’t have two or three points-paying races a week to choose from. That simplified things for teams and fans, but it meant the end of the days where the touring stars mixed it up with the locals. There was no longer room for a local team to build and enter a car at the top level for one race, and while the big teams might run some one-offs for names like Gurney, times changed.

Winners at Ontario and Riverside were winners across the land: Petty and Pearson, Allison and Waltrip. The one thing they had in common was that the majority of them were from the East Coast and Midwest. Drivers like Rathman and Panch were outliers until the 1990s saw West Coasters begin to seep into NASCAR’s upper level.

While Riverside and Ontario saw the easterners take over the winner’s circle, the same can’t be said for Sonoma or Auto Club Speedway. Those winners’ lists are peppered with California natives as the landscape of the sport has shifted to a driver pool from a broader area. A full third of races at both tracks have winners with California roots.

California natives with wins at Sonoma Raceway (11 wins in 32 races):

Gordon is the winningest Cup driver of all time from California, but he’s also tied with fellow Hall of Famer Bobby Allison as the winningest drivers in California, with eight apiece. Five of Gordon’s victories came at Sonoma and three at ACS; Allison claimed six trophies at Riverside and two at Ontario.

Second on both lists is Johnson, with six wins at ACS and one at Sonoma.

How much has the driver landscape changed? Prior to Gordon’s first title in 1995, no Cup champion could claim California as his home state. Since then, 13 championships have Golden State roots: Gordon’s four, Johnson’s seven, and one apiece for Harvick and Larson.

California’s rich history at the top level of NASCAR is also a microcosm of the sport as a whole. In the early days, the Grand National tour afforded ample opportunities for regulars to choose races for maximum points gains, but it also allowed for local drivers to share the national stage, often stealing the show entirely.

Many names that sound unfamiliar to the ears of NASCAR fans sit on the wins list alongside the Hall of Famers. Others were legends in their own right, dipping a toe into the NASCAR waters.

Fans were treated to something today’s fans simply aren’t: tracks in their own backyards with bragging rights often ending up in places they wouldn’t today.

Many California tracks have been lost to time, but the winners live on in NASCAR lore. The list will get longer on Sunday as the Cup Series once again heads west, to the land of untold dreams.