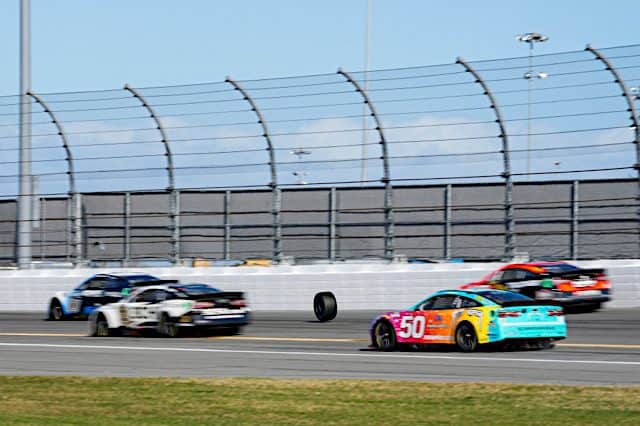 We have heard about it for several years. The Next Gen car is going to save the teams a ton of money while making the racing so much better. Well, we have seen it twice now, and the reception is mixed, to say the least.

The first run at the L.A. Coliseum left many of us wondering if the thing was made of paper mache after some minor hits caused major damage. Meanwhile, this past weekend left us scratching our heads over the viability of low-profile tires on a racecar. In the end, it is just too early to tell.

One of the funniest parts of this past weekend’s Daytona 500 was the shock and awe expressed over the fact that the bottom of the car, as seen during Harrison Burton‘s flip, was flat and smooth. Twitter erupted over the fact, acting like no one had any clue that they were constructing the cars in that fashion. Does no one pay attention to what we write? It has been widely reported that the bottom of the car would be flat because teams were spending millions of dollars directing airflow in ways that they desired, underneath the cars.

The flat underside eliminated those expenditures while also making the cars more aero efficient. The outrage over the flat bottom was also evident from all of the aerodynamicists on social media who are confident that the flat bottom will do nothing but encourage cars to become airborne. Again, for those not paying attention, the bottom of an IndyCar is perfectly flat. The underside of a Daytona prototype is completely smooth. The underbelly of an F1 car is utterly a pancake. They have been for years and those cars rarely get airborne. The bottom of the car is flat because it makes the most sense financially and aerodynamically.

Let’s all take a breath.

As for parts and pieces, the jury is still out there as well. At the Clash, there were multiple drivers knocked out of the event by vigorously warming their tires. For decades, drivers have been dumping the clutch and spinning the rear tires to build up heat and, ultimately, increase the grip of the tires. Obviously, drivers are going to have to alter their techniques and the manufacturers are going to need to beef up the components. We also saw, late in the Clash, Kyle Larson send Justin Haley into the inside k-wall. The resulting damage looked like an IED went off under the left front of Haley’s car. The new composite body seemed to handle contact much better than the old body did but some of the other components clearly need some attention.

Speaking of components, there were a few issues with the tires and wheels at Daytona. Penske and RFK had wheels confiscated because NASCAR did not like modifications that were made to allow for them to mount more easily onto the car. Other teams modified their rims for the same reason. Penske did inform NASCAR that they were modifying the wheels but, for whatever reason, the sanctioning body had some concerns and confiscated the wheels. This will probably be an ongoing saga throughout the year as the wheels and single lug nut are fine-tuned.

The tires are new and different in 2022, with a huge emphasis on different. They are On 18-inch rims instead of 15-inch rims and the sidewalls are significantly thinner. As a result, there is no inner liner as there used to be on one mile and larger tracks. The tires are supposed to have run-flat technology, although it didn’t seem to work very well on Sunday. It worked quite poorly when vehicles got into the grass and had a flat. They also disintegrated which resulted in the front suspension of several cars being ground down. With the highly abrasive surface at Auto Club Speedway this weekend it will be very intriguing to see what happens with the tires all day long.

The final obstacle with the new car, at least a major one, is the dearth of new car parts. Due to the new paradigm that has brought us to a virtual spec race car with individual parts being supplied by a single manufacturer we are faced with potential part shortages. Individual teams are lucky to have two complete race cars and multi-car teams have one backup for every two cars in most cases. With nearly 30 cars being torn up at Daytona, the potential for car shortages during the West Coast swing is legitimate. Do not be surprised if there are some conservative race strategies over the next few weekends.

The bottom line is exactly what we all knew coming into this season: We don’t know.

We don’t know what the cars will race like. We don’t know how.pit strategies will fall. We don’t know if we will have enough cars available. We don’t know much of anything. What we do know is that it is still racing. The team that performs the best and gives their driver the best chance to win is going to be near the front at the end. It will then come down to driver ability, and that is all we can ask for. Don’t be too judgmental of the cars just yet. Let’s see how things look at the midpoint of the season before we scream that the sky is falling. After all, it is a new car.

NA$CAR has morphed into Dr. Frankenstein and created a monster. We know how the movie they’re making with the networks ends.

I have to say that I was pleasantly surprised that NASCAR took no action against Penske, & RFK over the wheel issue. So many times they become knee jerk, & paint themselves into a corner.

I think the wheel problem is well on the way to being solved. The tire issue, I’m afraid will be a much tougher nut to crack.