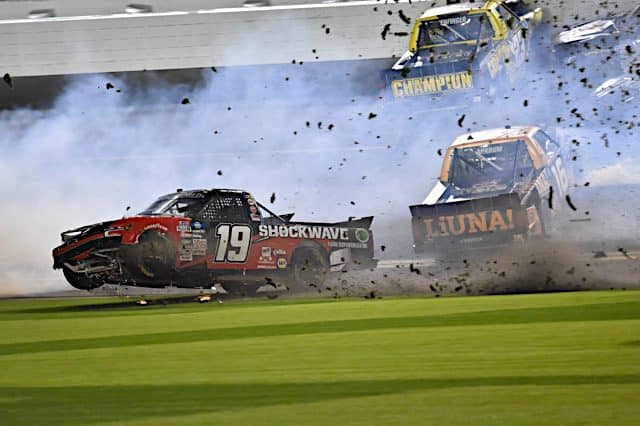 The NASCAR Camping World Truck Series opened up its 2022 campaign with an uncharacteristically tame race at Daytona International Speedway in terms of cautions. Well, tame at least until the Big One hit on lap 99, triggering the yellow flag that flew seconds before Zane Smith took the white flag and his first victory at the superspeedway.

Instead, a red flag, lasting for just over 15 minutes to clean up the on-track carnage, after the wreck that officially collected 17 trucks, including dominant driver John Hunter Nemechek, set up an overtime finish. But that overtime lasted just a little over a single lap before another incident involving Jason White and Kris Wright forced NASCAR to throw the yellow and end the race under caution.

One of the things that stood out after the checkered flag flew were the comments that followed.

“What a terrible race. That was REALLY bad.”

“The entire race was just garbage.”

“What a woeful race. TV coverage was miserable, the whole thing felt like an exercise.”

“I hope this was all a dream and I wake up and the real truck race was better.”

“It was probably the worst truck race at Daytona I’ve seen in a decade.”

I’m sorry, what? Apparently, I didn’t watch the same race as these commenters. What I saw was a lot of great racing, side-by-side battles, some impressive saves, and sadly, a little bit of the carnage that superspeedway racing is known so well for.

Keep your foot in it! pic.twitter.com/koeRq4Y3v8

Comments, like those above, raise the question of whether a race at Daytona needs to be a wreckfest for people to find it entertaining? After all, there were plenty of reasons to enjoy the race, even without a bunch of crumpled trucks.

We saw the beginning of Ty Majeski’s return to the sport full-time. Sure, he made a handful of starts last season but he seemingly got the short end of the sponsorship stick in 2020 and saw his full-time situation evaporate. This time around, though, he’s driving for a team that’s got a proven history in the series and one we know wouldn’t commit to a schedule it can’t make happen for the 27-year-old.

Then there was Parker Kligerman, who started at the back of the field after missing driver introductions. We got to watch him work his superspeedway magic all the way to a fifth-place finish. But what you can’t see in the results is that Kligerman’s push for race winner Smith was a large part of what put the driver of the No. 38 Ford in victory lane in the first place.

“I know I’m in such a rare position in this sport right now to have the chance to do this,” Kligerman told Jayski after the race. “You can’t take the smile off my face when I get to walk through that tunnel and know I’m driving and not working in another capacity. Going well or not, I’m having fun.”

And, oh, by the way, Smith just won his first race with Front Row Motorsports after ending the 2021 season with his second straight runner-up finish in the championship battle. Heck, we essentially watched Smith win this race twice, the first being when it wasn’t clear whether the caution flew before the white flag when the Big One hit.

With all of that said, there was a little bit of the feeling that drivers were afraid to wreck and start their season in a hole, and who can blame them? We’ve seen some terrifying wrecks at Daytona and digging out of the hole made by a DNF and a poor finish just makes for an uphill battle all season.

But it shouldn’t take a wreckfest for a race to be entertaining.

There seems to be a portion of fans who want to see carnage, & indeed the chance of danger has always been part of the allure of racing.

It’s really hard to have a legitimate complaint about this when NASCAR, & it’s TV partners play this up by rerunning images of spectacular crashes ad nauseam.

It’s part of the package, just like there are some people who attend boxing matches to see blood, & knockouts..

As a former car owner, (not NASCAR) I hate to see cars torn up, particularly in series like ARCA that run for much smaller purses. Because I know what it takes to fix them.

In short, I guess if it puts butts in the seats, & eyeballs for TV coverage we just have to accept it. After all, $$$ is the life blood of racing. And eyeballs are what the sponsors pay for so as one of Robby Gordon’s favorite sayings goes, “It is what it is.”

I agree…no danger: no audience.

The ‘new audience’ at the LA Coliseum cheered raucously every time there was a crash. Car crashing videos are very popular. As a 68 year old life time race fan, I still enjoy watching a crash, but don’t want to see injuries. Racing’s popularity is based on driver’s “cheating death at every turn.” You can make this sport too safe to be popular. Nascar must agree with that based on their actions to make the cars go slower and to create pack racing. It appears to be a sin to have a fast guy get hooked up and whip the field anymore. So, yes, I do watch races to see the occasional crash…and safety obsessed Nascar still markets every race with video of crashes.

You hit the nail on the head with this sentence; “It appears to be a sin to have a fast guy get hooked up and whip the field anymore.” Am I the only one that thinks it’s total BS that all teams have access to each others telemetry? How is that showcasing driver talent? One guy can no longer develop a driving style/strategy to gain an edge on the competition because they can all see in real time exactly what he’s doing. I get rules to limit development costs and try to keep somewhat of a balance on the car performance in order to let driver skill be the deciding factor, but at this level there is no reason for the other competitors to see each others driving tactics – aka “tricks”. They’re professionals, let them figure it out for themselves on the track and not from spying on their competitors via a laptop!

As for crashes… Why else is Daytona / Talladega the most watched racing events for NASCAR? Blood and Carnage. It’s not the “racing”.

Personally, I like to watch hard racing – beating, banging, rooting, and gouging on the small tracks. Well, I used to when the cars and drivers could take it – and so did 160,000+ other people who were including their yearly Bristol Ticket allocation in their wills or waiting years on a list to get the chance to buy tickets (prior to the repave which ruined it). Anyway, the wrecks from this kind of racing are generally pretty unspectacular and just interrupt the action, but they’re part of it – someone will eventually get pushed too hard and lose it.

You know, I don’t need to see 8 cars turned to into junk as a result of a big one or a car airborne to enjoy a race, but I have to admit, if a race has no cautions and no contact and no bent sheet metal, it does get kind of boring.