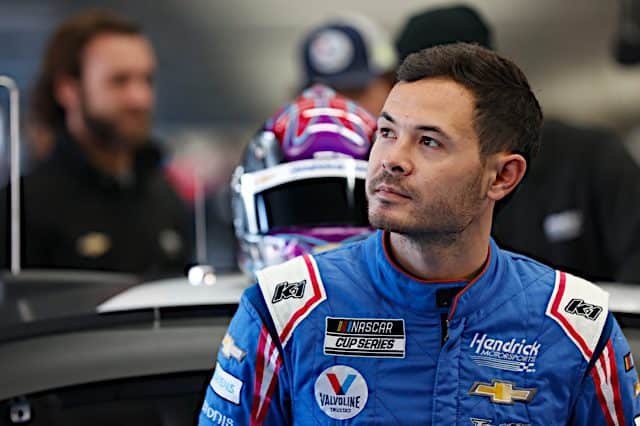 Will tires be a problem at Auto Club Speedway?

The Daytona 500 was NASCAR’s points-paying debut for the NASCAR Cup Series’ Next Gen car, and the race did not come without growing pains.

On lap 41, Kaz Grala‘s car lost a wheel. Just 11 laps later, Justin Haley suffered a mechanical problem that also caused his car to lose a wheel. And during a multi-car crash 151, Joey Logano went on what appeared to be a harmless spin through the grass. However, his tires were flattened, and the flat tires served as an anchor that kept his car locked in place. By the time he got a push to pit road, the damage was done, and he was trapped three laps down.

With a new car, there will obviously be some problems that need to be worked out, but this weekend’s race at Auto Club Speedway presents a new host of challenges. Auto Club has one of the most worn-out and bumpy pavements of any track on the schedule, and that might spell disaster for the teams and drivers.

While tire wear is usually important at tracks like Darlington Raceway and Atlanta Motor Speedway before the repave, the bumps and age of the pavement at Auto Club might provide a race in which tires wear out fast and blown tires might be frequent occurrences. (This wouldn’t be unfamiliar territory for NASCAR, as the 2008 Brickyard 400 had tires that gave out after roughly a dozen laps. NASCAR eventually had to intervene and end the second half of the race with competition cautions for every 10 green-flag laps.)

While it’s easy to think worst case scenario, it won’t be bad enough to throw mandatory cautions every couple of laps. That said, tires should be a major factor in deciding the outcome of the race, and the race itself will have relatively high attrition. It is up to the drivers to conserve their tires and equipment and make everything last for 200 laps and 400 miles.

See also
So It's a New Car

It’s potentially the final race on the 2-mile Auto Club configuration. Who comes away with the trophy?

This will be a difficult race to predict winners for because everyone is on a clean slate. Almost everything from last season can be thrown out the window in terms of predicting this one, because it will all depend on which teams get the early advantage with the Next Gen car. And to make things even more complicated, this race marks the first race at Auto Club since 2020, as the 2021 running was canceled due to the ongoing COVID-19 pandemic.

That said, I like Hendrick Motorsports’ chances. Kyle Larson dominated and won the 2017 race with Chip Ganassi Racing, and Alex Bowman did the same in the 2020 race with Hendrick. William Byron also showed his strength on the intermediate tracks last season, as he won at Homestead-Miami Speedway and came close to a victory in several others. If Hendrick has figured out the new car, I imagine its cars will be the front runners this weekend.

Behind Hendrick, Team Penske also has strong chances at claiming the trophy. Ryan Blaney led 54 laps and was on track for a second-place finish in 2020 until a flat tire in the closing laps relegated him to 19th. In the 2019 edition, Logano was top five all day and finished runner-up behind a dominant Kyle Busch. Logano also has some early momentum, as he won the Clash at the Los Angeles Coliseum and was a contender in his qualifying race and the Daytona 500 before crashing out of both. And riding high from his Daytona 500 win, I wouldn’t be surprised if Austin Cindric makes some noise toward the front of the field.

Finally, the big wildcard is Busch, who dominated the 2019 running of this race, as he led 134 of 200 laps on his way to victory. He also finished second in the 2020 race in what was otherwise a down year for him. Busch and the No. 18 team have been on a backslide since winning the championship in 2019, and if there was a time to turn their fortunes around and show that they’re back, Auto Club would be the place to do it.

Of the drivers who failed to finish at the Daytona 500, who will have the best rebound?

Of the drivers who made the playoffs last season, Kevin Harvick, Larson, Christopher Bell, Tyler Reddick, Denny Hamlin and Byron spent the end of the Daytona 500 watching from the garage.

Larson and Byron will have the best rebounds. Larson already has a win at the track, and Byron excelled the most at these types of tracks in 2021. I trust that Hendrick will have figured out the Next Gen car, and I wouldn’t be surprised to see Larson win the race and Byron finish in the top five behind him.

Hamlin is a bit of a question mark. He was a top-three driver last season, but Auto Club has been one of his weakest tracks. In 19 starts, he has just 147 laps led and a best finish of third on two occasions. I expect Hamlin to contend for a top-10 finish but not to be a major challenger for the win.

Harvick and Stewart Haas Racing as a whole had a disastrous 2021 season, and although Auto Club would be a great time to turn things around, we probably won’t get a full picture of the team until Las Vegas Motor Speedway. Harvick picked up a win at Auto Club in 2011, but ever since dominating and finishing second in the 2016 race, he has predominately been a non-factor at the track. I expect Harvick to at least finish in the top 15, but any lower than that and there might be a problem.

Bell and Reddick have minimal experience at this track in the Cup Series. Bell’s lone start in 2020 saw him finish dead last after blowing an engine 80 laps into the race. In the same race, Reddick finished a respectable 11th. Both of them should at least run in the top 20, but I imagine that they will both threaten for top 10s and 15s.

Who are the early favorites for the 2022 Xfinity Series championship?

The Xfinity Series in 2022 looks quite different from the way it was in 2021. 2020 champion and 2021 runner-up Cindric was promoted to the Cup Series and won the Daytona 500. Harrison Burton moved up to Cup to race for Wood Brothers Racing after spending two seasons with Joe Gibbs Racing. Sam Mayer and Josh Berry are both running full time for JR Motorsports, while Landon Cassill and defending champion Daniel Hemric and now full time for Kaulig Racing. Ty Gibbs is running his first full season at JGR, and Camping World Truck Series drivers Austin Hill and Sheldon Creed have moved to Richard Childress Racing to compete for Rookie of the Year honors.

With all of these changes and new faces, who stands out among the pack?

It’s only one race in, but Gibbs has to be the early favorite for the championship. In 2021, Gibbs picked up four wins in 18 starts, all at the age of 19. JGR has traditionally been one of the powerhouses of the Xfinity Series, and Gibbs and the No. 54 team will pick up right where they left off.

AJ Allmendinger impressed to the tune of five wins and the regular-season championship last year, but he came up short in the finale at Phoenix Raceway. Oval racing is still a relative weakness for Allmendinger in the series, but he picked up three wins on ovals in 2021 after entering the season with just one victory (Atlanta Motor Speedway, 2020) that wasn’t on a road course. If he can figure out the ovals and Phoenix in particular, he might in store for another deep playoff run.

Hemric is the defending champion, but he still has unfinished business before he can focus on going back-to-back. He is with a new-to-him team, and he finally got the monkey off his back in November by winning his first race and the championship all in one go. If he can continue running well and add a few more wins under his belt, consider him a contender for 2022.

There are still 32 races left to go in the season, and there are a bunch of teams and drivers that have the potential to make a big leap. After all, Hill pulled off a surprise victory at Daytona last week for his first Xfinity win. This weekend’s race at Auto Club will give a better idea of where everyone stands at the start of the season.