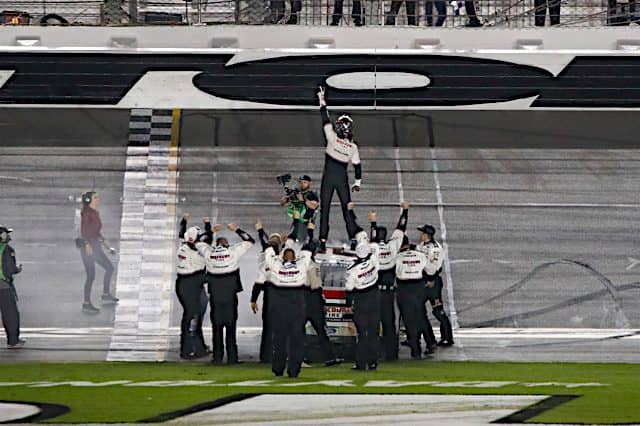 Some chatter this week on the Internet indicated that a few NASCAR followers hold the opinion that Austin Cindric could eventually be considered one of the top NASCAR Cup Series rookies in some time.

I’d say let’s rewind the clock to figure out how we got here, but unless your short-term memory’s foggy, there’s no need. Cindric won last weekend’s season-opening Daytona 500, becoming an ultra-rare example of a rookie or rookie candidacy-eligible driver winning the Great American Race.

The 23-year-old led 23 laps en route to the victory, including the final eight. Team Penske teammate Ryan Blaney effectively pushed him to the win and could not get past Cindric’s No. 2 out of turn 4, fading to fourth after Cindric blocked his path.

It was a big win for Cindric, who’ll compete for a championship in his rookie Cup season and is now the prevailing favorite for the 2022 Cup rookie title unless one of his competitors, Harrison Burton and/or Todd Gilliland, can also point their way into the playoffs later this year.

But it is far too early to consider Cindric a candidate for one of the best rookies the series has ever seen.

Mostly because it’s a knee-jerk reaction largely based on one race. Cindric’s win came at Daytona International Speedway, long held as a track at which anything can happen. Michael McDowell won the Daytona 500 in 2021 and was a non-factor in the playoffs. Even Trevor Bayne, the aforementioned rookie candidacy-adjacent Daytona 500 champion (he instead chose to run for NASCAR Xfinity Series points in 2011, the year of his triumph), has not won a single Cup race since.

Cindric also finished first as part of Penske, long a threat to win at any track, let alone Daytona, though last weekend marked the team’s first victory in the race since Joey Logano in 2015.

At the same time, I kind of get it. Seeing Cindric get to victory lane vs., say, Bayne felt quite different in the moment, and not just because Penske is inherently a better team overall than Wood Brothers Racing, despite their alliance these days. He was a contender for much of the day; he didn’t come out of nowhere because of a late-race crash to triumph when the other would-be winners had retired for the day. It was like, OK, this makes sense. It’s still a first-time winner, but we’ve seen those at Daytona plenty. Why not Cindric?

And then there’s his resume leading up to his rookie Cup jaunt. After his first two seasons running full time in NASCAR’s national series varied between promising but not spectacular (a one-win 2017 in the NASCAR Camping World Truck Series for Brad Keselowski Racing, finishing third in points) and underwhelming (his Xfinity run in 2018 in which he earned seven top fives and 13 top 10s, a year that, to be fair, was negatively impacted by his time that season with RFK Racing’s struggling No. 60), Cindric finally showed his potential in 2019 with two victories and a sixth-place points run.

At the very least, smart money was on Cindric becoming a serviceable Cup driver in the future (which seemed like his path given father Tim Cindric’s leadership position at Penske) who would be a formidable opponent on road courses. But then he caught fire in 2020, winning six races en route to the series championship. His 2021 was nearly identical, with one less win and a runner-up points finish, but a better average finish overall.

All this came with Penske, generally one of Xfinity’s best organizations, yes. But Cindric showed over the last two seasons a burgeoning talent on all circuits that at minimum pointed to a rookie campaign that had definite promise.

But consider Chase Briscoe, Cindric’s former Xfinity rival and probably the driver with the best all-around season the year Cindric won the series championship, thanks to his nine wins, 16 top fives and 22 top 10s. For 2021, Briscoe was promoted to Stewart-Haas Racing’s Cup program, and his season looked far more the part of your usual rookie run, with three top 10s on the year. His third-place finish last weekend marked his premiere top five in Cup competition.

That’s to say that Xfinity success does not necessarily equal similar results right off the bat in Cup. However, Cindric does have a leg up on Briscoe, at least. There’s the Penske connection again, while SHR largely struggled in 2021. Cindric also boasts seven 2021 Cup starts, one of which resulted in a top 10 at the Indianapolis Motor Speedway road course.

And perhaps most important of all, Cindric enters the Cup Series on a more even playing field. 2022 marks the debut of the Next Gen Cup car, which effectively slots him in alongside both fellow Cup newcomers and seasoned veterans when it comes to familiarity with the vehicles they’re driving.

Let’s not forget the other race with the Next Gen car this month, though. The one at which the playing field was even more equal because no one in the field had raced on it — new Cup car or otherwise.

At the Busch Light Clash at the Los Angeles Coliseum, Penske triumphed with Logano. Where was Cindric? Not even in the feature. He qualified his No. 2 20th but placed fifth in his heat race, sending him to the last-chance qualifer, where he came home sixth and failed to move on.

That weekend was all kinds of chaos, sure. But had Cindric been a factor that weekend, running quick laps and pointing his way into the feature, followed by a Daytona 500 win, there might be more juice to the argument. Instead, he was 34th in practice, 20th in qualifying and couldn’t race his way into the main event — all while his teammate won the whole thing and the other, Blaney, showed strength before a wreck took him out of contention.

Who’s to say the same won’t happen the next time Cindric visits a short track? Or any non-superspeedway, for that matter?

The sample size is small, and the two instances of Cindric’s rookie season we’ve seen so far have been at wildly different ends of the spectrum. Reality likely sits somewhere more in the middle.

Which is what, exactly? Top 10s for sure. Top fives here and there are also possible, especially at the superspeedways and road courses. He might even visit victory lane again, especially with the proliferation of right turns on the Cup schedule.

To that end, Cindric’s rookie season in Cup is likely to be considered a success; hard to say it isn’t with a victory already in hand.

But one of the best of all time? On par with the likes of Tony Stewart, Denny Hamlin, Jimmie Johnson and more?

It’s the first race of the season. Let’s give it a little more time.

Pump the Brakes on Austin Cindric and Bubba Wallace.
There I fixed your headline for you. Bubba will settle in at about 20th place as is his history and Cindric will have his ups and downs as a rookie even driving great equipment.

Austin has the same number of wins as Bubba after ONE event. And it wasn’t because of a shortened event.

Perfect storm… a top rookie driver, a premier ride with a top team, a race where having a blue oval was a definite advantage, and a new car that increased parity among drivers. Cindric will likely do well, but time will tell if he’s a top contender. Still, I wouldn’t bet against him.