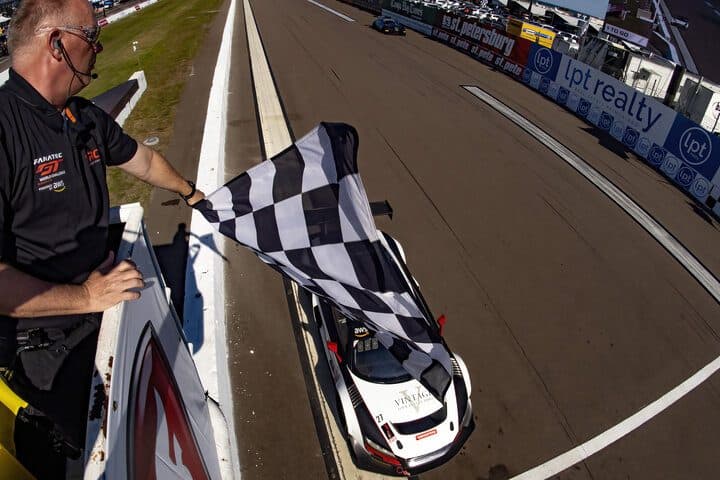 Jason Daskalos made good use of his original generation Audi R8 LMS Ultra and lapped traffic Friday (Feb. 25) to lead flag-to-flag to win the season opener for SRO America’s GT America Powered by AWS in St. Petersburg, Fla.  It is the first overall victory for Daskalos since 2020.

“I just got lucky in some traffic,” Daskalos said after the race to SRO America’s Amanda Busick.  “That was the gap I had at the end of the race.  I give credit to Scott [Smithson], he drove an amazing race.  Traffic was definitely the key today”

Daskalos had dominated the entire weekend up to that point and put his Audi on the overall pole.  However, there was trouble right at the start.  GT4 pole sitter Chris Cagnazzi got a bad start, allowing BSport Racing’s Bryan Putt to pass at the start-finish line.  In an attempt to immediately regain his lost ground, Cagnazzi tried to get Putt back under braking for turn 1.  He ended up clipping the right rear corner of Putt’s Aston Martin.

Clipping the Aston Martin briefly lifted Cagnazzi’s Mercedes off the ground and damaged the left front of his Mercedes.  This rendered him far too fast for turn 1.  He ended up plowing into the back of the Lamborghini Huracan GT3 of Jeff Burton.  Both drivers then slid off-course and into the tires.  In addition, Putt’s Aston Martin was launched into the back of Adam Adelson‘s Porsche Cayman GT4 RS CS.  The result was that seven cars were involved in the crash as Robb Holland, Jason Bell and Gray Newell were also wrapped up in the incident.

Cagnazzi, Burton and Putt were out on the spot.  Adelson and Holland managed to get back underway, but pulled off during the second lap of the race.  The Invitational class of two cars were eliminated in less than five minutes.  Bell and Newell were able to continue.

Naturally, this crash brought out the full course caution for nearly half of the 40-minute race to clear the track of disabled cars and debris.  Once the race truly got underway, it was a two man duel between Daskalos and DXDT Racing’s Scott Smithson.

At first, Daskalos’ eight-year old Audi seemed to have a pace advantage over the rest of the pack.  However, Daskalos had mentioned to SRO America’s Ryan Myrehn (the play-by-play commentator in the video above) that his car’s braking performance can deteriorate over time.  Sure enough, this happened, allowing Smithson to challenge.

Smithson, making his sprint race debut in a current-spec Mercedes-AMG GT3 for DXDT Racing, was able to place heavy pressure on Daskalos for the lead.  Crowdstrike Racing with Riley Motorsports’ George Kurtz was just behind in third.  Smithson was able to get side-by-side with Daskalos on multiple occasions, but was unable to get past.

Slower GT4 traffic would break up the battle from time to time, but Smithson was able to run Daskalos back down.  What won the race for Daskalos was that they caught the Aston Martin of Sean Whalen and the BMW of Marko Radisic with a little more than three minutes to go.  Daskalos was able to get past them entering turn 4.  Meanwhile, Smithson was stuck behind Whalen until after the exit of turn 10.  That cost Smithson multiple seconds and allowed Daskalos to take the win.

The margin of victory was a little more than half a second over Smithson, who put the pedal to the metal over the final two laps to catch up.  Kurtz was third, then David Askew in the second DXDT Racing Mercedes.  TR3 Racing’s Ziad Ghandour was fifth.

In the GT4 class, Cagnazzi was actually the class pole sitter.  However, the crash in the first corner turned the class upside down.  The Racer’s Group’s Derek DeBoer, who started third, was able to avoid the mess and moved into the class lead.  Moisey Uretsky, making his GT4 debut in a Toyota GR Supra GT4, ended up second.

However, Radisic, in the renamed SRQ Motorsports BMW M4 GT4, was the man on the move.  After starting eighth in class, Radisic quickly moved up to second and put the pressure on DeBoer only 10 minutes after the restart.  After a short battle, Radisic was able to take the class lead.  From there, he pulled away to take the victory in eighth overall.

Radisic’s margin of victory was 9.315 seconds over DeBoer, with Uretsky in third.  Ross Chouest was fourth, while Bell recovered from being involved in the first-lap incident to finish fifth.

Race No. 1 also serves as qualifying for Race No. 2.  By virtue of setting the fastest lap in the race at 87.610 mph, Crowdstrike Racing’s George Kurtz will start Race No. 2 from pole.  That race is scheduled to go green at 11:05 a.m. ET Saturday morning.  It will be streamed live on the GT World YouTube channel and on MotorTrend+.