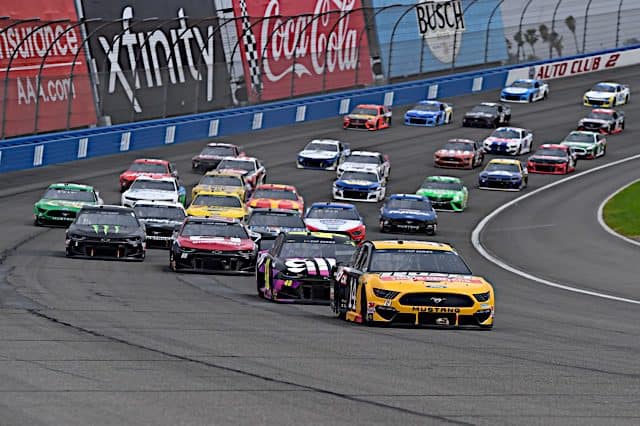 NASCAR last raced at the 2-mile California speedway in Fontana in 2020, when Alex Bowman claimed his second career victory in the penultimate NASCAR Cup Series event. That was about two weeks prior to COVID-19’s shutdown of the sports world.

This weekend, the Cup and Xfinity series divisions return to the high-speed oval. It’s also the tour’s second visit to the Golden State in 2022, after the Busch Light Clash at the Los Angeles Coliseum in early February, and marks the earliest NASCAR has raced at Auto Club since 2010 (hence the 57-year-old song reference above).

All three NASCAR national series visited Auto Club, then named California Speedway, in its inaugural year. Cup held its race there in June, which was won by Jeff Gordon, while Mike Bliss and Todd Bodine claimed the Camping World Truck and Xfinity races, respectively, in October.

The track was awarded two Cup dates on the schedule starting in 2004, though it was bounced back down to one for the 2011 season and every year since, and was renamed Auto Club Speedway in 2008. ARCA Menards Series West, CART, the NTT IndyCar Series, Indy Lights and IROC all made it a stop on their schedules through the years, with IndyCar the most recent to depart.

See also
Did You Notice?: NASCAR Wheels Turning On Next Gen Tire Troubles

The open-wheel series dropped Auto Club from its schedule after the 2015 visit, during which Ryan Briscoe went for a wild upside-down tumble through the grass in the waning laps.

The crash capped an afternoon in which the series set a record for lead changes in a race, eventually won by Graham Rahal, and averaged a speed north of 168 mph.

That speed, nothing much to blink at in terms of NASCAR or IndyCar, was further compounded by three- and four-wide racing on a pair of late-race restarts, which culminated in Briscoe’s terrifying flip.

NASCAR’s most recent hold-your-breath moment came in 2013 when, a week after feuding at Bristol Motor Speedway, Denny Hamlin and Joey Logano found themselves battling for the lead on the final lap. Contact ensued, paint was traded and neither ended up winning; Kyle Busch shot by on the outside to win the race while Hamlin spun down and slammed the inside wall, the driver of the No. 11 suffering a severe back injury. Logano, meanwhile, found himself on the receiving end of Tony Stewart’s wrath on pit road as the drivers and crews went after each other.

Ted Musgrave dominated the Truck Series’ run at Auto Club, winning three straight from 2001-03, while Busch won the final two races there in 2008 and 2009.

The Xfinity Series’ most recent winner is Harrison Burton, whose blowover on the Daytona International Speedway backstretch kicked off his full-time Cup career last weekend. Busch leads all NXS drivers with six triumphs, three of those consecutively to start the 2010s, while Matt Kenseth follows with four.

Cole Custer will be the only past Auto Club winner in the NXS field for Saturday (Feb. 26), driving the No. 07 for SS-Green Light Racing in its partnership with Stewart-Haas Racing.

As for the Cup Series, Jimmie Johnson leads all drivers all-time with six wins, while Busch heads up a varied class of still-active winners with four wins. Half of those wins for Busch came in back-to-back years in 2013 and 2014.

Bowman, Kurt Busch, Kevin Harvick, Brad Keselowski, Kyle Larson and Martin Truex Jr. all have one victory at ACS; the trophy has changed hands every year since 2015. When I talked to Tyler Reddick a couple of weeks back, he pointed towards Auto Club as a venue at which he could score his maiden victory. The driver of the No. 8 finished 11th in his lone Cup appearance there, also coming home seventh or better in both Xfinity starts.

Now in its 26th year of existence but 25th hosting NASCAR events, Auto Club is also moving toward major changes that could be in place for the 2023 running. Though a decision was made to slice the venue’s track length to a quarter of what it once was, there has been no confirmation of the half-mile configuration hosting a contest next year. Thanks to the COVID-19 pandemic, things seem to be in a holding pattern on that front.

It’s not just the reconfiguration — there’s several other question marks heading into this weekend’s Wise Power 400. Austin Cindric, fresh off a Daytona 500 victory in his first start as a full-time Cup rookie, has the chance to go back-t0-back to begin his career. Wheel issues plagued several teams at Daytona International Speedway as well, most notably Kaz Grala‘s No. 50’s wheel completely separating from the car and bouncing down the backstretch.

California has been the site of near-constant sports excitement in February 2022: the Clash to begin the month, followed by the Los Angeles Rams winning Super Bowl LVI on their home turf and now NASCAR returning to the state for the second race of the season. California dreamin’, indeed.

Things may look quite different when NASCAR visits the speedway in 2023, but this weekend might provide an Auto Club Speedway showcase of old.