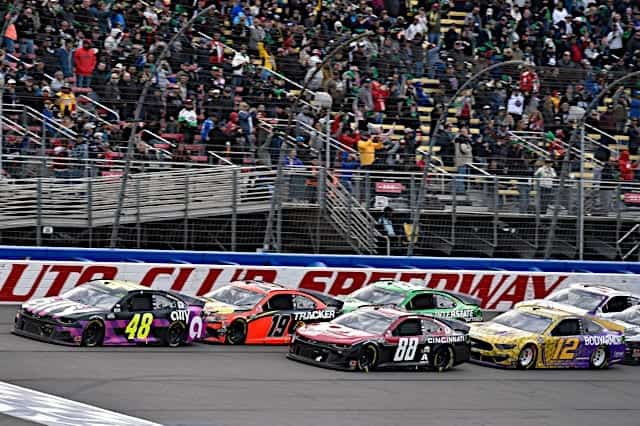 Myatt Snider’s NASCAR Xfinity Series wreck gave me flashbacks to Ryan Newman’s in the 2020 Daytona 500. What else can NASCAR do to improve safety on superspeedways? – Valerie P., Reno, Nev.

NASCAR can, is and will always be at the forefront of safety innovations in motorsports. The SAFER barrier and HANS device are two of the countless steps they’ve taken to ensure their series is the safest in motorsports.

But when wrecks like Myatt Snider‘s happen, it still takes your breath away.

I was standing on pit road listening to MRN Radio’s call of the final lap. My jaw dropped and I thought the worst. I mean, it looked like the worst, didn’t it?

Truly thankful that @MyattSnider is out of the No. 31 after a flip on the final #XfinitySeries lap at Daytona. pic.twitter.com/GnZ3Zv9DYa

But when Mike Bagley said that Snider had dropped his window net, I breathed a sigh of relief. We all did.

NASCAR could slow the cars down, sure, but they have in the Cup Series and Harrison Burton still got airborne in the Daytona 500. They could play around with specific rules like the locking of bumpers, but it’s unlikely that would realistically change the frequency of airborne wrecks. Not to mention the tough task that would be to officiate.

In terms of keeping the cars on the ground, NASCAR has made progress but still has room for growth. Safety has and will remain of paramount importance for the sanctioning body, but it’s a moving target. What’s safe on Sunday may not be on Monday, and vice versa.

Something else that was a bit alarming was Ricky Stenhouse Jr.‘s crash late in the 500-miler. Did you notice the in-car camera and how violently his neck snapped forward when he hit the wall?

Whatever you call this "alternative" HANS that Stenhouse, Larson, and some others use, certainly isn't as effective. Same one that let Larson's head hit the wheel at Talladega in 2019 pic.twitter.com/DgnnyxYllJ

As Jonathan Fjeld pointed out on Twitter, Stenhouse’s HANS device is approved but is not necessarily the one most drivers use. The video is jarring for sure and may lead to additional safety regulations for equipment down the road at all tracks, not just superspeedways.

What’s the future of Auto Club Speedway look like? The conversation about the short track has slowed down, and I remain skeptical that it’ll happen. – Paul G., Sacramento, Calif.

In short: who the hell knows.

At the Busch Light Clash at the Los Angeles Coliseum, Auto Club Speedway track president Dave Allen was committal at best when asked about the future of the 2-mile track.

“Obviously COVID put a strain on everything, we all felt it,” Allen said. “But I don’t think it’s slowed down the enthusiasm for what we’re working on. We want to sustain racing for a long time to come and make sure what we’re doing at ACS and the land that we have is responsible for not only our sport but the community around us.”

It’s no secret the land ACS sits on is extremely valuable. It’s branded as the track in the Los Angeles market, but realistically is at least an hour outside the city (especially with city traffic). With the Clash at the Coliseum a resounding success on all levels, it begs the question: does Auto Club need to transform into a short track after all?

If the answer is no, then focus shifts to whether Auto Club’s 2-mile configuration holds a place on the Cup Series schedule and in NASCAR in general?

See also
Stock Car Scoop: Was NASCAR's Clash at the Coliseum a Triumph?

The initial plan for track transformation was announced as official on Sept. 8, 2020, with initial plans for groundbreaking to begin after the 2021 event in preparation for a 2022 short track. As Allen said, though, COVID changed those plans.

NASCAR didn’t visit ACS at all in 2021 and the short track redo was moved tentatively to 2023. Now it’s on hold altogether.

“We’re taking our time a little bit. I’m excited about pushing forward and continuing to work on it,” Allen said. “I’m optimistic, I feel pretty good about it. Can’t wait to talk more about it as we get closer, and we will.”

Update on the Fontana transformation:

💭 “We’re still working on plans. They all haven’t come together yet.” 🤷🏻‍♂️

Allen was saying what he needed to say, but it’s clear that he doesn’t know what the future of the track will be. Two-time champion Kyle Busch says it’s clear what’ll happen, though.

“I prefer the 2-mile, but after (The Clash), I’ll guarantee you it’s getting cut up,” he said following his runner-up finish at the coliseum.

Whether this weekend is the last race on the 2-mile configuration, the last race at Auto Club in general or just the return after a two-year absence, let’s enjoy the track for what it is: one of the best on the schedule.

Sell it to a developer. The France spawn are obsessed with Southern California and the people are not enamored with the sport. How many college students were admitted to the Clash? Time to find someplace else to send the cars if February.

Likewise, the Ryan Newman accident and the Matt Snyder and Harrison Burton accidents this past weekend were terrifying. If safety is really first and foremost for NASCAR, would suggest significant changes to the race and track configuration. Pack racing as it has existed in recent years can be thrilling to watch…….if you enjoy carnage. Baked into the track configuration (s) and race format are guaranteed chaos and destruction of equipment, at significant physical risk to drivers, as well financial risk to teams, team owners and sponsors. I guess too many spectators / viewers enjoy that kind of crappy entertainment.