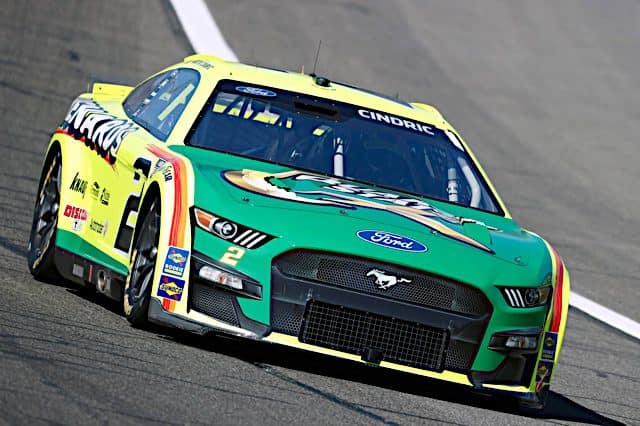 It came down to Daytona 500 winner Austin Cindric vs. 2020 series champion Chase Elliott for the pole in Sunday’s (Feb. 27) WISE Power 400. Elliott had the pole in hand for most of his lap, but spun in turns 3 and 4 coming to the start-finish line, one of four drivers in the final round to have trouble, handing Cindric his first career Cup Series pole in just his ninth career start.

Cindric’s lap came in at 174.647 MPH – just a tenth of a second quicker than Erik Jones, who clocked in with a lap of 174.157 MPH. Kyle Busch, Denny Hamlin and Daniel Hemric completed the top five in the final session.

Ryan Blaney will line up sixth, the last driver in the top 10 to complete a lap. Joey Logano, Brad Keselowski, William Byron and Elliott round out the top 10 after spinning on their qualifying runs.

It comes off the heels of a practice marred by spins and wrecks that plagued multiple drivers, including 2014 champ Kevin Harvick and Ross Chastain.

William Byron spins off Turn 4 and slides into the grass. Today’s list of incidents in two 15-minute practice sessions and single-car qualifying includes 25% of the #NASCAR Cup field:

One notable absence from Saturday’s qualifying action was Kurt Busch, as he failed Friday’s tech inspection three times. Buschwas not allowed to make a qualifying run, received the last pit selection and lost his car chief for the weekend. He’ll also will have to take a pass-through penalty under green at the start of Sunday’s race.

FOX will have TV coverage of the Auto Club 400 from Fontana Sunday (Feb. 27) starting at 3 PM Eastern/Noon local.