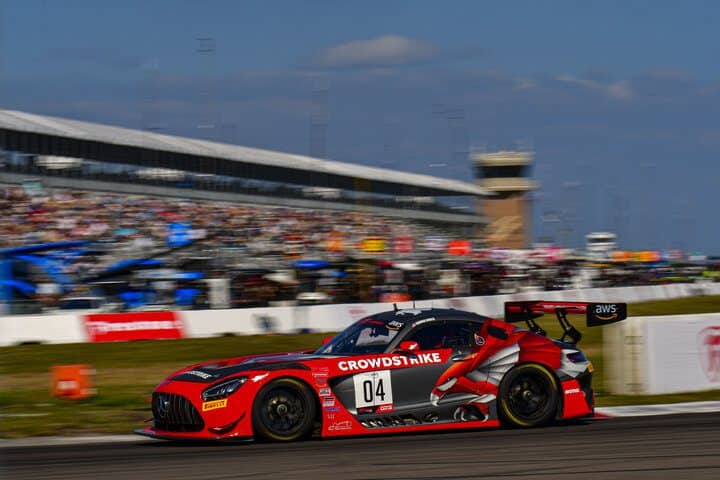 Crowdstrike Racing with Riley Motorsports’ George Kurtz started from the pole and got the immediate jump on the field Saturday morning (Feb. 26).  From there, he drove away from the pack to take an easy victory in GT America Powered by AWS Race No. 2 in St. Petersburg, Fla.

When the green flag came out, Kurtz got an excellent start and opened up a gap almost immediately.  Meanwhile, outside pole sitter Mirco Schultis didn’t get a great start and lost some ground.  Meanwhile, TR3 Racing’s Ziad Ghandour got a great start and made a move to the inside.  CJ Moses in the GT2-class Audi tried to make some hay as well.  Under braking for turn 1, Moses nudged the back of Ghandour’s Lamborghini.  This in turn led to Ghandour making contact with Saturday winner Jason Daskalos‘ Audi.  That pitched Daskalos into Schultis, spinning out Schultis’ Callaway Corvette C7 GT3.

Schultis was able to continue after the spin, but a slipping clutch put him out of the race a few laps later.  Daskalos’ Audi was damaged in the incident, putting him out at the end of the first lap.

The incident split the GT3 field as Kurtz, DXDT Racing’s David Askew and Ghandour were able to get away, along with Moses in the Audi R8 LMS GT2.  The rest of the GT3 cars were stuck behind slower GT4 traffic and lost significant time.  Three laps into the race, Kurtz had a four-second lead on the field.

Askew did all he could to keep pace with Kurtz, but ended up sliding off in turn 10 and tapping the tire barrier.  While the incident didn’t really hurt his Mercedes-AMG GT3, it did drop Askew from second to fifth.

The man on the move early on was Jeff Burton in the No. 191 Lamborghini.  After crashing hard in the first corner of the race Friday, Burton started 25th overall and quickly made his way through slower traffic to get up to fourth overall.  However, Burton was not discriminating enough in where he made his moves.  One of his passes was made under a local yellow.  That resulted in a drive-through penalty that dropped him out of the hunt.

Scott Smithson got held up in the first lap crash and dropped back to eighth overall.  He was able to slowly move up the order.  However, he could not get past Ghandour.  The two drivers battled for third for laps and laps and laps.  When Askew went off, it became a battle a second.  Smithson was able to take the place when Ghandour missed the braking point for turn 1 and went wide.

By that point, Kurtz had a near 15-second lead over Smithson with 17 minutes to go.  That advantaged ballooned to 19 seconds when Smithson got in traffic, but the rookie was able to cut the advantage back down to 15 seconds.

Unfortunately for race fans, the event ended under caution due to a crash involving The Racer’s Group’s Derek DeBoer and The Heart of Racing’s Gray Newell.  DeBoer had dropped from second to fourth and had just blown the entry to turn 1 while trying to get Moisey Uretsky back for third.

This put Newell in range for a pass.  Newell went up DeBoer’s right side heading into turn 4.  Casual contact was made between the two cars in turn 4.  They remained side-by-side into turn 5, where more contact was made.  This contact spun Newell out and punctured the right side radiator on DeBoer’s car.  A couple of corners later, DeBoer slid in his own fluid and smacked the wall exiting turn 7.

Newell’s Aston Martin was not damaged and was able to continue.  However, DeBoer’s Porsche was heavily damaged and needed a tow.

Smithson ended up second, followed by the Ferrari of Triarzi Competizione’s Justin Wetherill, who turned in the fastest lap of the race.  Ghandour dropped to fourth after a late spin exiting the hairpin.  Askew ended up fifth.

Moses was the only driver in the GT2 class.  He brought his Audi home in seventh overall, one lap down.  In the Invitational class, Robb Holland ended up eighth, one lap down to take the win there over Adam Adelson.  Both drivers entered the new Porsche Cayman GT4 RS CS, which has not completed the SRO homologation process as of yet, hence why they were not in the GT4 class.

In GT4, Friday’s winner Marko Radisic started from the class pole, but ended up on the outside when Schultis spun out.  That dropped him way down the order.  Meanwhile, GMG Racing’s Jason Bell had contact with the right rear corner of DeBoer’s Porsche.  This lifted his left front corner off the ground briefly and damaged the car a little bit.  Part of Bell’s splitter came off and continued to get progressively worse as the race continued.  It looked as if a shark had come into the track and took a bite out of it.

Gumprecht got past DeBoer with a little under nine minutes to go.  DeBoer may have had some braking problems as he continued to overdrive his car in order to compensate.  Unfortunately, the crash with Newell ended his day and the race itself.

Bell was eight seconds ahead of Gumprecht when the yellow flew with five minutes to go and held on for the win.  Uretsky was third, while Radisic recovered from his bad start to finish fourth.  Newell recovered for fifth.

GT America Powered by AWS teams will take a few weeks off before they join the rest of SRO America’s series at Sonoma Raceway the weekend of April 15-17 for the third and fourth races of the season.