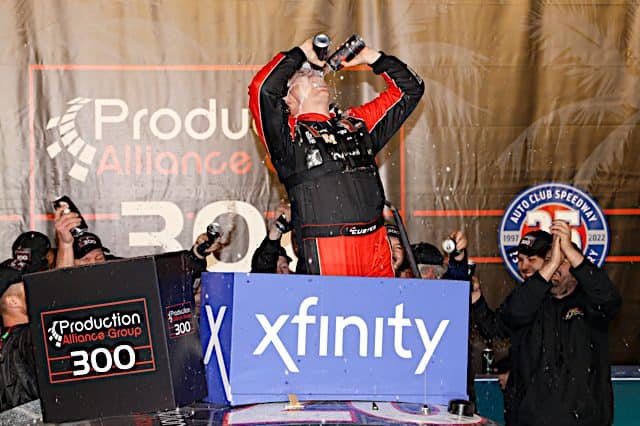 The Production Alliance Group 300 was a long one, with an air time near four hours. The No. 07 Ford Mustang was fast all day long, allowing Custer to lead a whopping 80 laps. Noah Gragson, Trevor Bayne, Josh Berry and Anthony Alfredo rounded out the top five when the checkered dropped.

Alfredo finished P7 last week at Daytona International Speedway. But en route to that, Alfredo had about as weird of a race as anybody could, recovering from losing his back right window during the opening laps as well as being involved in “the big one” at the end.

Alfredo had another late rally for a good result this week. He and the rest of the No. 23 Our Motorsports team took a gamble with around 25 laps to go when he stayed out as the rest of the field pitted to throw on some fresh tires. They banked on there being another caution, and they got it with about 10 laps to go due to some on-track debris. Alfredo pitted and had fresh tires while everyone else had some tire wear. He restarted 24th with six laps to go, and after three overtimes, finished the race in fifth. How’s that for a rebound?

JR Motorsports makes its second appearance on my “winners” list after following up a solid opening weekend at Daytona with an even better one at Auto Club. The team had two top-five finishers last week. This week, the team one-upped themselves with all four cars finishing in the top 10. Gragson piloted the No. 9 Camaro to second to lead the charge, and for a while, JRM had a chance for a 1-2-3 finish.

The fans in attendance get the final spot on this week’s winners list. After Brandon Jones‘ scary crash into the barrels at the start of pit road, which he thankfully walked away from, NASCAR officials dumbed the remains of the pit road barrels in the infield. This made easy pickings for fans in attendance who wanted to grab one of the most unique souvenirs that I can think of from any race.

They dumped the broken sand barrels in the infield and fans have surrounded them to grab pieces. pic.twitter.com/aw4pDZJ6M5

Landon Cassill‘s No. 10 Chevrolet went up in flames early in the race, and the fireball was something akin to a train wreck. You know it’s not good, it’s going to be expensive and it’s a very dangerous occurrence, but you can’t look away. Thankfully, Cassill walked away unscathed.

When asked about how the fire started, Cassill was as up front as possible.

“I’m not really sure (what happened) yet,” Cassill told Frontstretch, “There was just some smoke under the hood off of turn 4, and I looked and saw that I had no oil pressure. So I might have slung a belt or had an oil line come off or something like that and then started a fire under the hood.”

Austin Hill won the Beef. It’s What’s for Dinner 300 only a week ago. Fast-forward to this week, though, and things couldn’t have gone much worse. Hill was turned into the wall near the start of the race and spent the majority of the affair two laps down. He finished P27 after starting in eighth.

After the race, Hill made sure to find Berry, the driver that turned him, in the pits. Plenty of viewers and twitter-goers thought this was a spat of some good old-fashioned Xfinity drama.

Austin Hill not pleased with Josh Berry after the race and expressed it with him. #NASCAR pic.twitter.com/fKWn1EgBRW

But in reality, Hill simply shook his hand as the two drivers went their separate ways. Berry was even apologetic in post-race interviews.

“I knew he was going to be mad,” Berry said, “And it’s rightfully so. I own it when I screw up, and I screwed up. I know he’s mad, and maybe he might owe me one one day. But at the end of the day, all I can say is ‘Sorry’ to those guys.”

Bayne returned to the driver’s seat this week in the Joe Gibbs Racing No. 18 ride, and they couldn’t have given him much more sharp of a whip. The two-tone works perfectly with the Supra body, matching the body lines perfectly. Cars always look better when they’re high up the finishing charts, too, and Bayne brought his sweet ride across the finish line in third, fresh off the couch.

It’s still way too early in the season to make any bold predictions as teams try to find their groove, but there is still plenty to take away from a fun weekend in Fontana, Calif.

So far this season, we’ve seen the NASCAR dream somewhat play out for a lot of small teams. Brandon Brown is running well in sub-par equipment. Alfredo, as we said earlier, had a fantastic week. Heck, I’d bet everything in my wallet half of the NASCAR fan-base isn’t familiar with SS Greenlight Racing, and they won the race. The point is that Xfinity is still the proving ground, and these guys are doing just that — proving themselves.

How is this happening, you might ask? Technical alliances. This week’s winner was decked out in Stewart-Haas Racing equipment. Going forward, I expect to see more and more of this in Xfinity, as larger teams look to expand their driver pool and influence throughout the sport. This gives smaller teams a chance to compete for more owner points and win more prestigious races, which, in turn, typically ends with more funding as teams strive toward total independence.

We’re headed to Las Vegas Motor Speedway for the Alsco Uniforms 300. The green flag drops at 4:30 p.m. ET, and as usual can be found airing on FOX Sports 1. Berry took the checkered flag in the last race in Las Vegas while filling in for an injured Michael Annett in the JRM No. 1 Chevrolet.