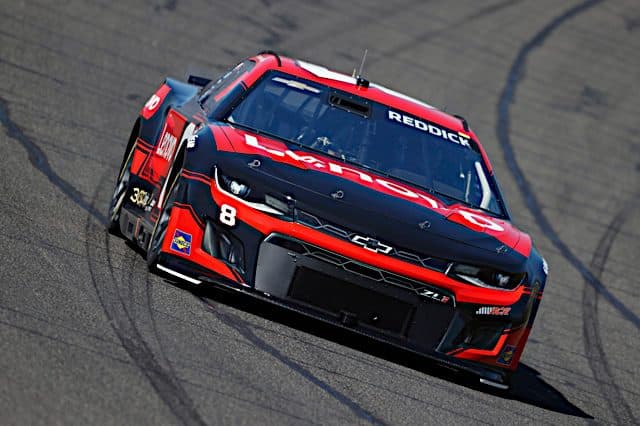 Tyler Reddick had the car to beat at Auto Club Speedway, his hometown track on Sunday (Feb. 27).

Instead, he finished 24th, one lap down, after watching a potential first win slip away.

Reddick had led 90 of the race’s opening 151 laps, won the first two stages and was pulling away from the field when the left rear tire on the No. 8 Chevrolet went down. The Corning, Calif., native proceeded to lose the lead and was limping his car around the track in the high lane when things got even worse.

William Byron, who ran inside the top 10 the entirety of the race until that point and had even led 16 laps, wiggled as he was passing Reddick. The bobble caused the No. 24 to go up the racetrack and right into the No. 8 machine before hitting the outside wall.

“So frustrated I made that mistake for our team today,” Byron said. “What a fast car, and we were making our way back to the front. I got loose getting under the No. 8 [Reddick] who had a flat. Thankful for such a fast car, and I know we’ll be back stronger next week.”

The crash ended the day for Byron, who has yet to finish a race this season. He was credited with 34th.

Reddick was able to drive away from the incident, and the Richard Childress Racing crew got the car repaired enough to keep going. But his No. 8 no longer had competitive speed, finishing the race as the first car one lap down in 24th.

“Absolutely gutted by how our race unfolded, but I couldn’t be prouder of this whole team and what we were able to do a majority of this race today,” Reddick said. “We will learn from this. We will become stronger from this and be hungrier than ever before. … We will keep this momentum going to Las Vegas next week.”

Despite the poor result, Reddick tied for the sixth most points scored on the day thanks to two stage wins. The 90 laps Reddick led were more than his first two seasons running the NASCAR Cup Series combined.

But despite the RCR cars showing more speed so far in 2022 than in recent years, Reddick is still looking for this first top-20 finish of the season.

Byron would’ve beat them all if it wasn’t for that wreck. He was turning the fastest laps before the 8 tried getting a caution thrown