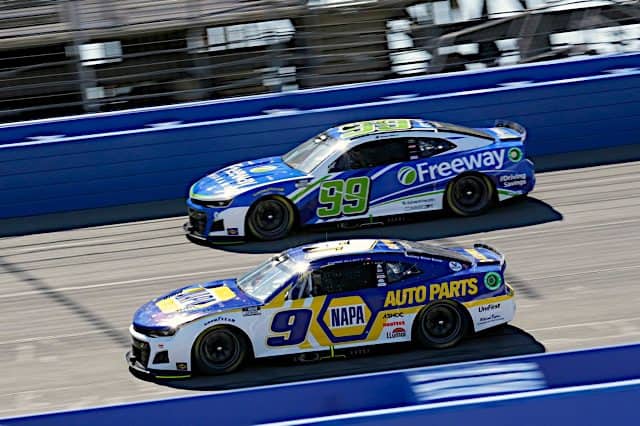 NASCAR is back at Auto Club Speedway for the first time in two years.

The last time the Cup and Xfinity Series raced in Fontana, the race ended up being the second-to-last before the COVID-19 pandemic shattered any and all forms of scheduling for major sports in 2020, leading to a two-month stoppage for NASCAR.

Before that happened, though, Alex Bowman put on a show of dominance in California, leading 110 laps en route to his second career victory. This Sunday’s (Feb. 27) Wise Power 400 marks the first time back at the two-mile oval in as many years.

Austin Cindric, fresh off his maiden Cup Series win in the Daytona 500, won the pole for the race, while Erik Jones set a time quick enough to sit on the outside of the front row. It’s Cindric’s first career pole and Jones’ first front-row start in more than two years.

Justin Haley will start at the rear for changing an oil cooler change, while Harvick, Keselowski and Logano will join him there for unapproved adjustments.

While now-NTT IndyCar Series driver Jimmie Johnson is at the top of the Cup wins list at Fontana with six, Kyle Busch leads current drivers with four. No other current driver has more than one win there, but Bowman, Keselowski, Kurt Busch, Kyle Larson, Martin Truex Jr. and Kevin Harvick will all have a shot at their second on Sunday.

On Saturday (Feb. 27), Stewart-Haas Racing Cup driver Cole Custer won from the outside pole, surviving a number of chaotic late-race restarts to claim the win. He did so in SS Greenlight Racing’s No. 07, scoring the first victory for the organization in NASCAR competition.

Celebrities will dot Sunday’s race: actor Danny Trejo, who’s appeared as the title character in the Machete films as well as Heat, From Dusk Till Dawn and countless others, will wave the green flag; MLB player Albert Pujols, a veteran of the St. Louis Cardinals, Los Angeles Angels and Los Angeles Dodgers, will drive the pace car; and the Super Bowl LVI Champion Los Angeles Rams’ tackle Andrew Whitworth is set to give the command to start engines.