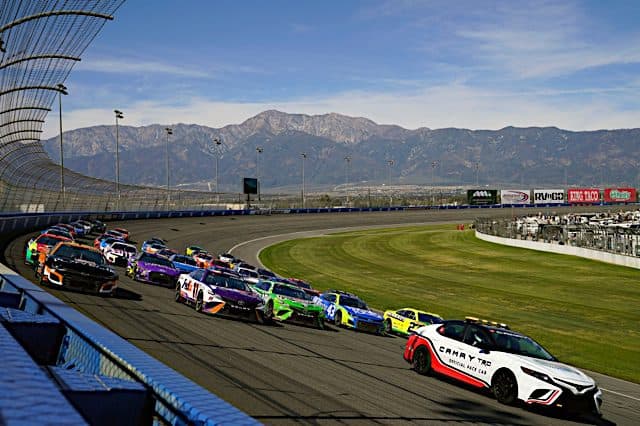 Auto Club Speedway was the first intermediate track of the 2022 season and the first the NASCAR Cup Series has visited since Kansas Speedway last October. The result, though, wasn’t new at all.

Kyle Larson won the last intermediate track race of 2021 and he won the first of 2022 on Sunday (Feb. 27), taking the top spot in the WISE Power 400. He passed Daniel Suarez for the lead with three laps to go and held off a charging Austin Dillon on the final circuit. While Larson didn’t make it look as easy as he did for most of 2021, the reigning Cup champion put himself in position to capitalize when others had issues while avoiding trouble himself. As simplistic as that is, it’s a recipe for a great finish.

And don’t forget... Tyler Reddick. Mark my words, he’s going to win this year, sooner rather than later, and very possibly more than once. A blown tire took that chance away Sunday, but the Richard Childress Racing driver made his presence known, leading a race-high 90 laps – 17 more than his total for the past two seasons combined. He showed a lot of promise late in 2021 and looks to be picking up right where he left off.

After 10 cars spun Saturday during practice and qualifying, the question on many minds was whether the race would bring similar results.

Spoiler alert: it did. The cars are hard to drive (they’re supposed to be) and there were plenty of incidents, 12 cautions tying a track record for the Cup Series. Luckily, they were almost all single-car wrecks, but more than enough of them popped up to disrupt the race.

The race weekend did raise some concerns with the new car beyond tire issues. The ductwork on this car is harder to access and clean out, meaning they will overheat more easily, as Kyle Busch and Christopher Bell found out the hard way.

Another thing that seems to be ongoing is the inability of the cars to get rolling if they cut a rear tire and come to a stop. They simply spin the wheels instead and have to be towed. The lack of an inner liner also contributes to making a simple incident worse than it is. That’ll contribute to teams falling out of races when they shouldn’t if cars can’t get rolling, particularly when they wind up in the grass. NASCAR has indicated it’s aware of this problem and expect to have a new procedure in place as soon as Las Vegas Motor Speedway next weekend.

And don’t forget that these cars are hard to tow on a hook. Teams don’t want them damaged and insist on flatbeds, which can take more time to hook together in a cleanup. Right now, that’s a minor thing, but really, cars that don’t break when being towed should be a basic requirement.

NASCAR did the right thing after Daytona International Speedway, acknowledging the wheel issues teams experienced. It’s the right thing to investigate more problems as they pop up and also to make changes as necessary to prevent them going forward.

Pole sitter Austin Cindric, fresh off his Daytona 500 victory, had a solid top-10 car at ACS. While he wasn’t really a contender for the win, the freshman set himself up nicely for a solid finish. Unfortunately for the rookie, he was collected in a spin from Brad Keselowski and while the damage wasn’t terrible, the incident knocked him out of contention. Cindric still finished 12th on the day, a decent outcome all things considered.

Active Auto Club win leader Kyle Busch went for a spin early, and while he appeared to recover with little damage, his day was far from uneventful. An overheating issue cost him several laps as the No. 18 team worked under the hood, then a flat tire sent him for another spin in stage two. The attrition eventually worked in Busch’s favor; he was able to take advantage of the free pass a couple of times in the final stage, and despite those issues, wound up a respectable 14th.

2020 race winner Alex Bowman also had some struggles, brushing the wall a couple of times and never quite looking comfortable. He finished sixth in stage one, but it was downhill from there as a late bout with the outside wall left Bowman 25th.

While there was a lot to like about the race, persistent tire problems cast a pall over the day. And one in particular very likely played a major role in the outcome.

It’s impossible to say with certainty that his blown tire cost Reddick the win (though that seems likely), but it definitely changed the flavor of the final stage.

Mechanical problems, crashes and other things that are often beyond a driver’s control can happen at any time. Still, when they begin to alter an entire race, it’s not pretty.

The current tire has a much lower profile than its predecessor, which is in line with current production models, but the resulting lack of inner liner magnified things Sunday.

The West Coast swing rolls on to Las Vegas and its 1.5-mile oval. The Fords looked like the best cars at Daytona, while Chevys ruled the day in Fontana. Will it be Toyota’s turn to shine in Sin City?

At least for now, it seems to be anyone’s game. The Toyotas have speed but have lacked luck. When that changes, we’ll see how strong they really are.

One thing to expect as the season goes on is an ebb and flow among teams at the top of the pylon. One team or manufacturer might hit on something for a couple of weeks, but then another will find something else and take the reins for a while. We saw it with the Gen-6 car and we will see it with the new car, too.

So what will we see in Vegas? It’s hard to say. The tires are a big question mark after Fontana, but the surface at Las Vegas is different. We may see new pop-ups, and we may see some of this week’s issues solved.

Yeah, that’s a bit of a loaded question, but drivers and teams who might not have been part of the conversation before inserted themselves on Sunday. There were nine different organizations with cars in the top 10 when the checkers flew over Fontana.

The No. 43 of Erik Jones and the newly-formed Petty GMS Racing organization ran up front all day, leading 18 laps. GMS brings stability to the organization, a solid performer in the Camping World Truck Series for several years.

Trackhouse Racing Team looked like it would have a pair of top-10 finishes until Ross Chastain became another victim of tire woes. He could only sit and watch as Suarez raced for the win before settling for fourth. New Cup entry Kaulig Racing had a decent day, as well, with ninth-place Daniel Hemric.

No, we won’t see Rick Ware Racing making a title run or anything crazy. But at least for now, the playing field is a bit more level as the new car is there for whoever can get it figured out first. The big question is how long it might last.

All in all, the issues with the new car are growing pains. By the end of Spring these issues should be resolved and we should be able to separate the teams that are contenders from the teams that are pretenders. It will probably shake out the way we’re used to… money is always king. Any shake-up in the status quo will be because of the infusion of new cash into second-tier teams like Roush.

It’s a new season, though, and the racing hasn’t disappointed so far. While it’s too soon to read much into that, it’s still promising.