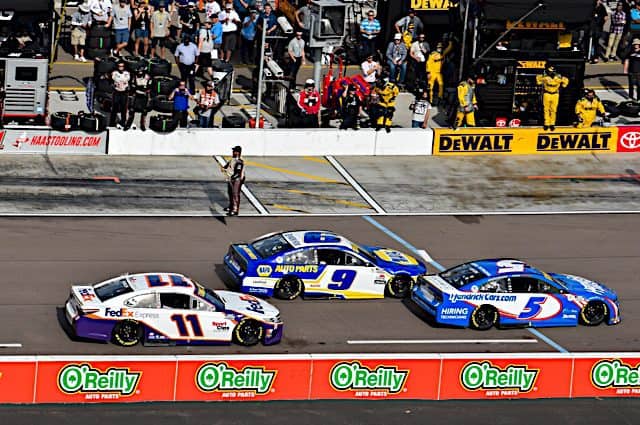 In their first year together as teammates at Hendrick Motorsports, Kyle Larson and Chase Elliott mostly played nice.

With 21 laps to go during Sunday’s race at Auto Club Speedway, both drivers had a shot at victory. Larson was fighting for the lead with Joey Logano, trying to side draft the No. 22 car down the frontstretch. At the same time, Elliott had a great run of his own and was rapidly closing in on the two leaders. As the three drivers approached turn 1, Elliott swerved to the right, trying to pass Larson and Logano at once in the high groove. But just as he did so, Larson moved up the track, resulting in the No. 9 getting sandwiched into the wall. The contact forced Elliott to pit road with a flat tire, ending any chance he had to win the race.

Meanwhile, Larson successfully held off Logano and continued to stretch out his lead as the laps ticked away. He had another interesting moment while lapping Elliott, who made noticeably little effort to get out of the No. 5’s way. But a few laps later, Elliott went spinning again in a long, slow slide off the exit of turn 2. As a result, the caution flag came out for a track record 12th time on Sunday afternoon.

Unlike so many races last year, Larson did not have the fastest car on Sunday (Feb. 27). After starting in the back of the field, he had to work his way through the pack methodically, a challenge that took most of the race. It was only after Tyler Reddick, the day’s most dominant driver, dropped out of contention that Larson looked like one of the favorites to win.

Elliott had a hard-fought battle at Auto Club as well. While leading early, he got loose and hit the wall, leading to a spin on lap 38. The No. 9 team had to spend the rest of the race trying to claw back from that early incident. But once Elliott got his track position back, it was clear that his car was fast enough to fight for the win.

Yet the battle for the lead on lap 180 almost resulted in neither Hendrick car winning. While Larson won the last race off of pit road and led at the final restart with four laps to go, Daniel Suarez slipped past him as they raced off the exit of turn 2. Suarez was having a quiet day up until that point, but he was able to take the lead away from Larson despite restarting in the normally unfavorable low groove. It took a huge run from Larson to catch and ultimately pass Suarez on the next lap, taking the lead back for good and racing to his 17th career Cup Series victory.

So, even though one of the Hendrick cars did wind up in the winner’s circle, there will likely be some hurt feelings among Larson, Elliott and their fans. Elliott’s supporters will understandably be upset about their driver getting stuffed into the wall and having a potential victory ruined, just as Elliott was himself.

However, the most logical explanation is just what Larson said on the radio: he didn’t know Elliott was there. Elliott closed so quickly on the two leaders that his presence in the high groove probably caught Larson off guard. It is also possible Larson was trying to arc his entry into the corner in an attempt to keep his momentum up to clear Logano. Elliott doesn’t have to be happy about the contact, but it looked and felt much more like a racing incident than anything malicious from Larson.

Additionally, Larson fans may find Elliott’s lap 192 spin fishy. Could Elliott have spun on purpose, knowing that it would trigger a caution and make Larson’s path to victory more difficult? It was only a few months ago when Elliott, after late-race contact with Kevin Harvick while battling for the lead at Bristol Motor Speedway, blocked Harvick for several laps and allowed Larson to take the win. Did Elliott take subtle revenge on Larson at Auto Club?

While speculation can be fun, there is also a simpler, non-malicious explanation for Elliott’s crash. The contact with the wall probably broke something in the No. 9’s suspension, causing Elliott to spin as he was trying to limp to the finish. Besides, if Elliott was really angry enough to the point that he wanted to make Larson lose the race, he could have easily spun the No. 5 into the infield as he passed him on the frontstretch. Not to mention that Elliott recently inked a new, long-term contract with HMS. The thought of him deliberately messing with a teammate’s race seems too farfetched.

The real question as far as Elliott and Larson are concerned is if Sunday’s race might have any future implications. These are the two most recent Cup Series champions and both drivers will likely be major figures in this year’s title fight. The next time Elliott and Larson are battling for the win, will they cooperate or will any lingering ill will from Fontana impact their decisions on track?

It’s a problem that Rick Hendrick has faced before. Most infamously was the feud between Jeff Gordon and Jimmie Johnson during the Spring of 2010. Normally best friends, Gordon made some comments over the radio, and eventually to the media, that revealed a significant level of frustration about how Johnson was racing him. Yet while the tensions were real between Gordon and Johnson, they didn’t last long. The unity of Hendrick Motorsports ultimately prevailed.

With having Larson and Elliott under one roof, Hendrick may be facing his next big challenge. It is inevitable that both drivers will be battling for more wins this year. Everything that happened between them at Auto Club Speedway can be chalked up to bad timing. But if any bad blood from Fontana lingers, it is easy to think that Larson and Elliott will be more deliberately aggressive with each other next time. If so, the unity of the Hendrick family will be tested once more.

It’s not blocking if you didn’t know a car was there. It is just changing your racing line.

Did the spotter say anything to Larson about Elliott’s run?

If a guy sees a VERY attractive lady at a party and starts to walk toward her and another guy comes up from behind and tries to pass him and gets bumped into a table, who is to blame?

lol ok, it was Larson’s fault for not knowing he was out there and he admits to that. His spotter also admits he accepts all of the blame. I would be just as mad as Chase, but what now that two have admitted how stupid they were. You either believe them, and I do, or ya don’t. Up to Chase now.

You won’t like the politically correct answer….
both of them, for being men.