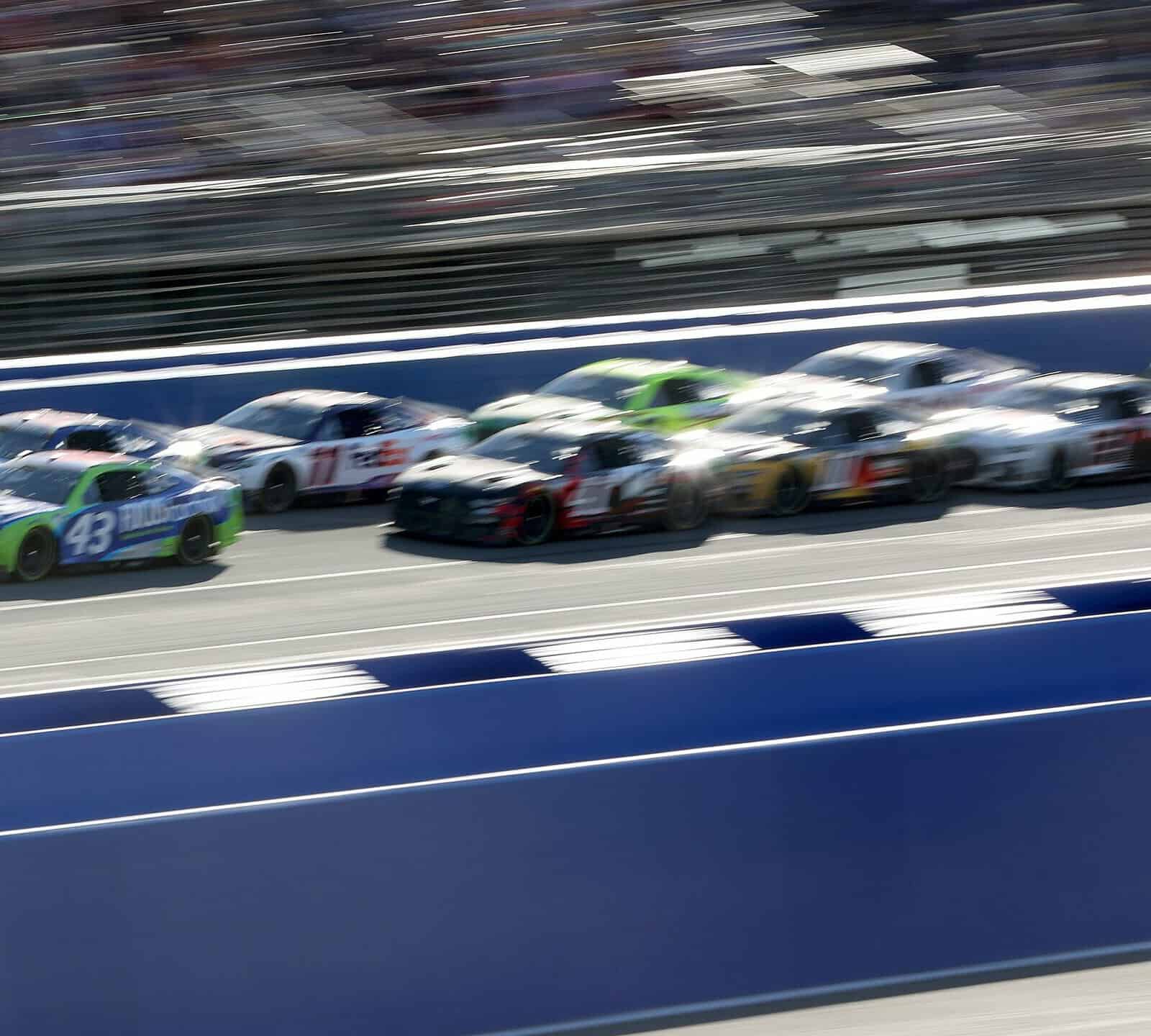 A weird thing happened to me last week.

For the first time ever, I was excited about a NASCAR Cup Series race at Auto Club Speedway.

I’ve been watching NASCAR for roughly 25 years, basically the length of Auto Club’s existence, and covered it professionally since 2014.

At no point in that time did the thought “I can’t wait for Fontana” cross my mind.

To be fair, the track has put on decent racing. The 2013 edition, with the dramatic finish between Joey Logano, Denny Hamlin and Kyle Busch, can’t be ignored.

But that was just the finish and it was nine years ago.

Compelling Cup races on the 2-mile track have always felt like an outlier to the norm. They occasionally happened despite the track or the car.

As the week progressed, I was cautiously eager about the Wise Power 400. It would be the first real competitive test for the Next Gen on an intermediate track after the Daytona 500 and the exhibition at the L.A. Coliseum.

Of the many purposes behind the introduction of the Next Gen car, the one that mattered the most to me was making the racing better.

Specifically, the racing on intermediate tracks.

Then came Saturday and the spins and wrecks.

To be clear, I do not root for accidents to happen. But the prospect of them is exciting.

And when was the last time we had qualifying and practice sessions as exciting as we got Saturday?

He was going for it all. Watch as Chase Elliott spins coming to the line in Fontana qualifying. pic.twitter.com/SG3pYxmB8a

If that’s the kind of show we get from qualifying, what could we expect from the actual race?

Turns out, more of the same!

Seven of the 12 cautions Sunday were for single-car incidents or spins.

According to NBC Sports, that total wasn’t reached overall until the eighth race of last season at Martinsville Speedway.

As the season progresses and drivers continue to find the limits of the car at each track, the phrase “Calamity Corner” could have a resurgence.

Then there was the actual competition.

I, for one, was never bored.

The race clocked in at 3 hours and 3 minutes, longer than the average of 2 hours, 42 minutes and 30 seconds. But it never felt like that much time had passed. While it took a while for the first two stages to be completed, those stages had a whole race’s worth of excitement to keep us from ever disengaging.

There were 32 lead changes among nine drivers over the course of the 200-lap race. That’s the race’s most lead changes since 2016 (26) and just the fifth time there’s been more than 30.

According to Joseph Srigley, there have been 19 different top-10 finishers through two races this season, which hasn’t been seen in Cup since 1973

Through the first two NASCAR Cup Series events of 2022, 𝐍𝐈𝐍𝐄𝐓𝐄𝐄𝐍 different drivers have scored a top-10 result. (@Aric_Almirola the only with two)

It's been almost half a century since the last time this has occurred at NASCAR's top-level (1973).#NASCAR | #SrigleyStats pic.twitter.com/7IK2Cs7Q4W

Then you throw in who was in the hunt for the win.

Sure, Kyle Larson got the trophy. But this wasn’t a vintage 2021 Larson victory.

The Hendrick Motorsports driver only led 28 laps. Of his eight oval track wins with Hendrick, that’s by far his lowest total. His low last year — when the majority of his oval wins occurred with the high downforce, low horsepower package — was 103 laps at Las Vegas in the spring.

Who did Larson have to defeat?

There was Erik Jones, who qualified second and finished third. The Petty GMS Motorsports driver earned his first top-five finish since 2020 and earned the No. 43’s first top five on a track shorter than 2.5-miles since 2015 at Dover.

“It was good race, it feels good to be interviewed after the race, too,” Jones said. “It’s awesome, but it’s also frustrating. You’re that close and you have a car that you feel like can do it. …  I just haven’t raced up front a lot in the last year-and-a-half. There are some things I need to be better at. Hopefully I have a lot of time to work on that. We want to keep running upfront and if we keep doing that, we’re going to win some races.”

Daniel Suarez was only a couple of laps away from giving Trackhouse Racing its first Cup win. Then Larson struck and he had to settle for fourth.

And don’t forget about Tyler Reddick.

The third-year driver went out and won the first two stages before a cut tire took him out of contention for his first career win.

“Absolutely gutted by how our race unfolded, but I couldn’t be prouder of this whole team and what we were able to do a majority of this race today,” Reddick said. “We will learn from this; we will become stronger from this and be hungrier than ever before.”

All of this has resulted in the most positive buzz about a Cup race at Auto Club that I can remember.

Was Fontana a good race?

No. 12 was “Don’t overreact … Just because someone looks reasonably good at Auto Club Speedway doesn’t mean we should christen them as a dark horse playoff contender.”

Well, I’m going to try to adhere to that.

But when it comes to the Next Gen car after the show it put on Sunday, it’s hard not to be enthusiastic.

Are there still issues that need to be addressed, like the car becoming a beached whale if it gets a flat tire? Sure. But that’s more an inconvenience than an embarrassing headache.

If the Next Car can revive the racing at a track like Auto Club, what else can we expect?

I don’t have any concerns about how it will perform at Las Vegas or Phoenix, tracks capable of hosting good races with the previous car/rules packages.

But what about Richmond Raceway? Could it see a return to the type of racing that makes its “The Action Track” nickname apt again?

Charlotte Motor Speedway? Could the Coke 600, NASCAR’s longest race, return to being a must-watch event for the first time in more than a decade?

What about Texas Motor Speedway?

OK, maybe that’s a step too far after one race.

I may be overreacting, but I’m excited to have these questions answered.

I can’t agree with you’re take on the tire issue. I’ve been following NASCAR for over 50 years & I’ve never seen anything like the current tire & wheel problems.
I don’t fault Goodyear, I think they’ve given NASCAR what they wanted, it just isn’t working. Looks to me like there are two options. Either develop a real run flat tire. Or go to something that will take an inter liner. A better way to get a stranded car off the track, isn’t the answer. They have to find a way to be driven off.

The wheel problem, as I understand it is that when the wheel is slammed on during a pit stop. Sometimes the steel threads on the shaft mills off some slivers of aluminum which jams the threads. Then the nut doesn’t seat properly.

Yes, the 5 lug system could also result in a loose wheel, But that was because of a mistake, The current situation really isn’t, but they can’t keep having wheels come off. IMSA, Indy Car. & F1, all use the single nut system & the all work, NASCAR just needs to study what they’re doing differently.

I know it’s hard, but at some point I think NASCAR is going to have to go back to the drawing board, & be flexible enough to make some changes.

The positives outweigh the negatives on the new car, & I’m sure they’ll figure it out.

So far the NextGen car is doing what NASCAR had hoped, which is closing the performance gap between the Big 4 teams (JGR, HMS, Team Penske & SHR) and the rest of the field. To see mid-pack teams like RCR, Petty-GMS and Trackhouse running up front at an intermediate track is pretty unusual, especially in the same race. I wonder if this trend will continue?

Bill B
Reply to  JT

It won’t last. Unless they are going to introduce a new car every other years, the teams with the most resources will figure it out soonest and the gap will just widen from there. This isn’t true parity, it’s more like the parity you get when you are fighting with a blind man and he turns out the lights.