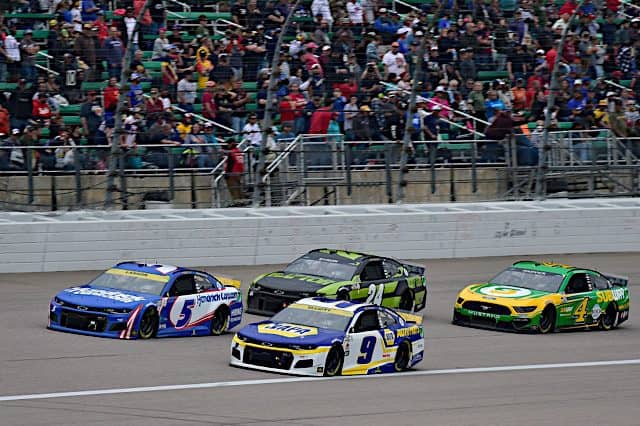 Did You Notice? … Chase Elliott‘s frustration with Kyle Larson boiling over at Auto Club Speedway this past weekend? Elliott was upset with Larson pinching him on the outside while fighting for the lead three-wide in the Wise Power 400, contact that damaged the No. 9 Chevrolet and inevitably led to a spin that took him out of contention.

“Stupid motherf***er,” Elliott said on the radio right after the incident. “He’s a f***ing idiot.”

Later on, after his spin, spotter Eddie D’Hondt referred to the contact by Larson as a “d*ck move by him.”

Chances are, you’ll see these two play nice in front of the cameras quickly and claim it’s all water under the bridge by Las Vegas Motor Speedway this Sunday (March 6). Hendrick Motorsports is known for its political correctness, and they’re not going to play around with tension between the two most recent NASCAR Cup Series champions. Larson has already apologized in public, making clear he didn’t mean to wreck his teammate intentionally.

“We have enough respect for each other,” Larson said Sunday (Feb. 27). “That I don’t think it will get out of hand at all. … [Elliott is] going to be upset, which he has a right to be, but I’ll explain my side, and he’ll believe me or he won’t.”

What will happen in private, behind closed doors, is anyone’s guess. Elliott, who recently signed a five-year contract extension to stay at HMS, is clearly happy where he’s at driving the No. 9 car. You just wonder if his inability to win at the rate Larson has is starting to wear on him a bit. Consider …

Suddenly, Larson’s presence creates a little bit of a seesaw within an organization that looked to be built around Elliott as recently as 14-15 months ago. Now, Elliott’s greatest threat for the title may run within his own organization for the better part of the next decade.

How does HMS handle that internally to make sure they stay on the same page? As we saw with Jeff Gordon and Jimmie Johnson, when paired up at HMS, only one of them could take home the championship trophy. The duo did get along, despite Johnson winning six of his seven titles during the time they ran together full time (2002-15) while Gordon won zero.

Here’s the difference between that scenario and Larson-Elliott: Gordon had already experienced four titles and several years’ worth of success. His selection of Johnson as a prospect was about the long-term success of HMS, an organization he now helps run as its vice chairman. There was also a clear understanding with the age difference Johnson would inevitably be more successful than Gordon at some point.

That’s not the case with a 25-year-old Elliott, who still has decades left to run in this sport. 13 wins and one championship isn’t something he’s about to rest his laurels and retire on.

HMS prides itself on building the teamwork mentality that’s led to the explosion of multi-car organizations over the past 30 years. But in the end, NASCAR is still an individual sport where only one driver gets to win the race and, inevitably, the championship.

My guess is Gordon’s going to have his hands full. It’s a big early challenge for him in his new role.

Did You Notice? … The level of parity we’ve seen two races into the 2022 NASCAR Cup season? 10 possible top-five finishes have been earned by 10 different drivers. The current point leader and Daytona 500 winner is a rookie, Austin Cindric, who’s got a total of nine Cup starts to his name. The most dominant performance to date has been turned in by a winless driver, Tyler Reddick, whose Richard Childress Racing organization has just one victory of their own over the last three years.

It’s clear the road to the NASCAR playoffs is cloudy this year as the Gen 7 chassis puts everyone on an equal playing field. Consider the sheer number of organizations that have collected the 20 top-10 finishes so far this season.

That’s a whopping 13 organizations out of 16 (81.2% of those who own a NASCAR charter). Live Fast Motorsports, Wood Brothers Racing and Spire Motorsports are the lone exceptions.

Compare that list with last year’s NASCAR playoffs, where four teams combined to fill up 13 of the 16 cars on that grid. Early returns show 2022 could be much more competitive with these new spec chassis designed to reduce any advantage the larger mega-teams have over the rest of the field.

How can someone like you (and other writers), that have been around the sport for a while, be so naive (or is it just that you all don’t know what else to write about). The parity we are seeing now is incidental as a result of there being a new car. Do you really think this new car has negated the age old reality that money buys speed? If not, then you must realize that this current state of parity will be short lived, so why make it sound like it’s the new reality?

As for Elliott and Larson, every week there are at least a few drivers who end up PO’ed at another driver for whatever reason. These two just happen to be teammates. Shouldn’t the take away be that even though they are team mates there are NOT team orders for them to play nice during competition. They will work it out. And yes, Larson out performed Elliott during the 2021 season but he still made the final four and once you make it into that group, that’s all you can ask of the team you are on.

I agree, this parity focus will be short lived. Larson is in everyone’s head lol. He a fantastic racer and he’s smart too. He adapts well. Chase had a right to be mad, but I put the fault more on Larson’s spotter since Kyle was pretty occupied with Joey at that time.

Well, Nascar really wanted Michael Jordan in Nascar and today he more or less said the teams 25% of tv revenue isn’t enough. lololol this will go over well with the ruling family. Less reliant on sponsors is how he put it. So since it’s Michael Jordan, this is going to create more attention. I’m laughing.

Yep, that will go over like a fart in church. LOL
Of course he’s right but, if that’s a surprise to him, then it’s Denny’s fault for not pointing that out up front.

MikeinAz
Reply to  Bill B

I must admit that I had higher expectations for parity, but for the most part it looks like it always has. I don’t really understand why though. If everyone gets chassis and engines from one manufacturer I would think the cars would be more equal, but I guess not.

As far as tension, you see pitchers confront fielders for errors; offensive linemen derided by quarterbacks and running backs; defensive backs for blown coverage; it goes on.
These are high-strung athletes. I’m sure it will be in the memory banks, but that is sports. Let’s see what happens in the playoffs.

Now, what is going to happen to Larson when the WOKE crusaders discover his new-resurrected career. It’s obvious NASCAR is not at the top of society’s list, more of a niche. I know the France klan doesn’t agree, but that is a fact. If they declare war on Larson, lots of things will change. I believe Elliott signed a 5-year extension.

I also am not a fan of either, just an analysis.

Thanks for the coverage.

I’d say Mr. Larson is in just about everyone’s head at this point. If he wins Vegas, which I don’t believe he will, heads (including those down in Daytona) will start exploding.

when i saw larson win this past sunday i thought “here we go again”. the “what if” is if the 8 car had not problems. suarez was doing his best to get his first win. i think larson just saved his car for the final run more so than the others. maybe larson is just the new gordon or johnson that had a bullseye on their backs cause of winning so much in a season. i think as long as larson has an outlet during the week, the other racing he does, it will help him from saying something that might cause him problems cause of his past sins.

it will be interesting to see how the car shakes out in the next few weeks. the overheating was interesting in california. i haven’t looked to see what weather is in vegas this weekend. the tire/wheel deal, we’ll see. they’ll be here at ams in a few weeks….new surface and new configuration, that should throw another wrench into the works.

His dirt racing definitely helps his learning. He hung out from 3rd to 5th for a long time. He was learning and content to ride there. I’ve been waiting for Reddick and Larson to put on a show, hopefully it’s at Vegas.