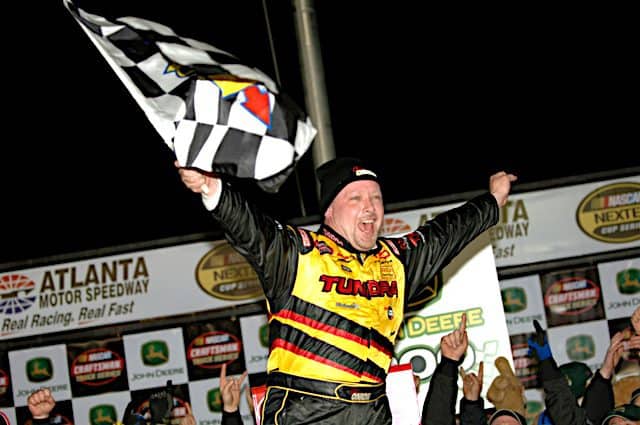 The last time Todd Bodine raced in the NASCAR Camping World Truck Series was 2013 when he ran just seven events for ThorSport Racing and a single start for the now-defunct Turner Scott Motorsports before leaving the series. This Friday night (March 4) at Las Vegas Motor Speedway, he’ll make his return behind the wheel of the No. 62 Camping World Toyota.

It all began as a Twitter challenge from Camping World CEO Marcus Lemonis, who learned Bodine was just six starts away from running 800 races in NASCAR. The challenge? Get fans to share 800 reasons why Bodine should return to racing.

Hey @Team_Onion people say you are 6 away from 800 starts. I need 800 reasons from your fans to do this for 6 .. they must use #goodsamOnion pic.twitter.com/5ra46C7ghA

And less than two weeks later, that goal was reached and Lemonis is making good on that promise.

In December, the announcement came that Bodine would drive a second truck for Halmar Friesen Racing in those six starts, scheduled to come at Las Vegas, Darlington Raceway, Texas Motor Speedway, Sonoma Raceway and Nashville Superspeedway.

Bodine’s Truck Series career began during the inaugural season in 1995 when he made five starts for Roush Racing. During that short timeframe, he posted five top 10s, including a best finish of fourth in his debut.

After that, it wasn’t until 2004 when he returned to the series to run 10 races that included wins at Auto Club Speedway and Texas for Germain Racing. He returned the following year to run full-time and made 10 starts for Tom Eldredge before returning to Germain Racing where he would spend the majority of his Truck Series career. During the 2005 season, Bodine scored five wins, including three straight to close out the year but came up short in the championship battle.

In 2006, Bodine scored the first of two championships he has to his name but only won three races that year. He started off with a runner-up in the season opener at Daytona International Speedway and never dropped lower than third in the standings. Completing 99% of the laps run that season (4075 of 4079), Bodine scored 16 top 10s and an average finish of 8.4 en route to a commanding championship win by 127 points over Johnny Benson.

He won the championship again in 2010, this time with four wins, 17 top fives, 20 top 10s and an even more impressive 6.4 average finish. In fact, Bodine was so consistent that season that he wrapped up the title a week before the season finale.

He’ll face some stiff competition in the field this weekend, but if he can readjust to driving a truck quickly through practice and qualifying, Bodine will definitely be one to watch this weekend in Las Vegas.