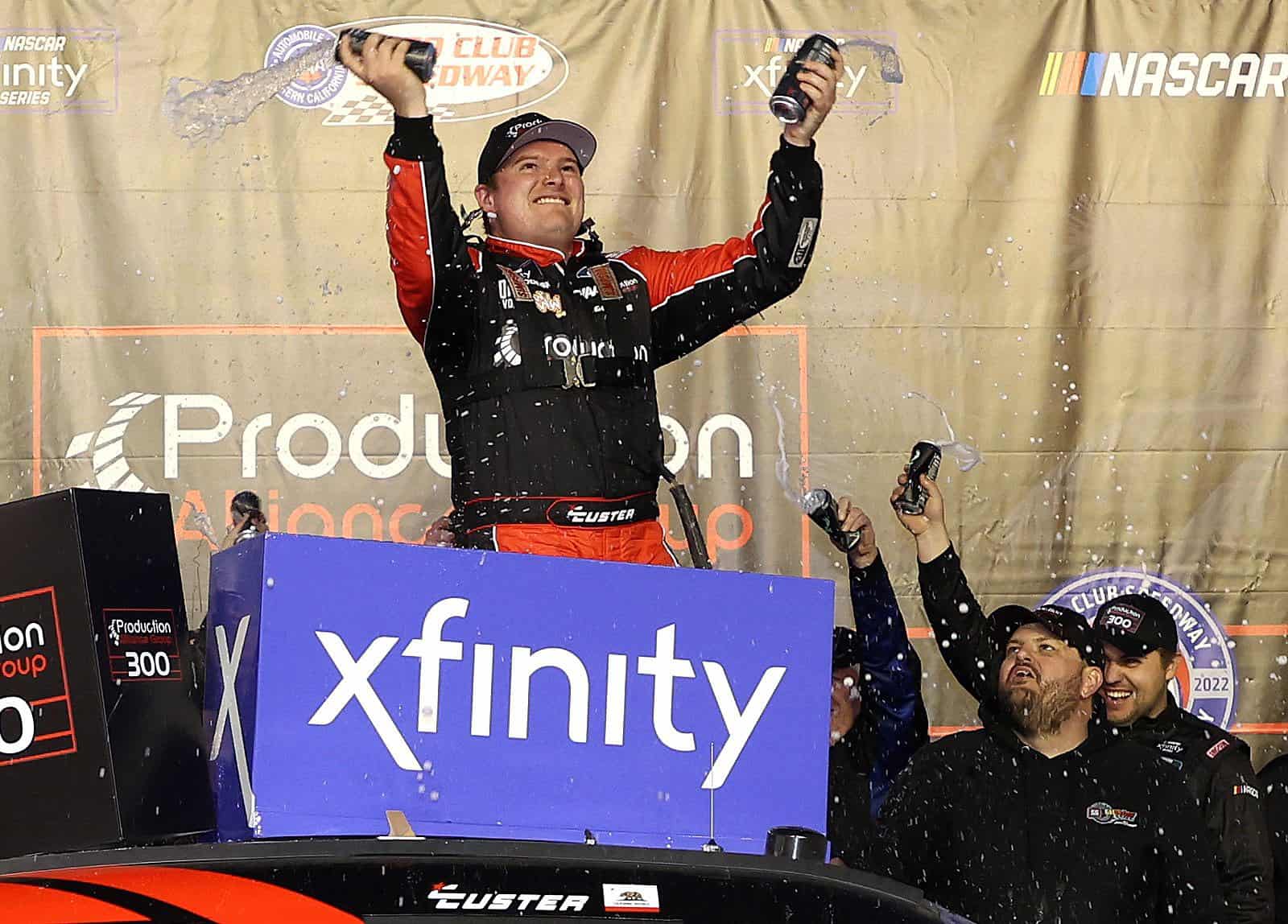 How many of you watched the Xfinity Series race Saturday (Feb. 26) and the term Busch-whacker snuck into your head? I can tell you it vividly snuck into my head. For those of you who aren’t familiar with the term “Busch-whacker,” I’ll tell you. It’s a term for a full-time NASCAR Cup Series driver who at the same time competed full-time or very regularly in the NASCAR Busch Series, now known as the Xfinity Series.

The term has seen a drastic drop in usage in recent years due to NASCAR rule changes limiting the number of races a Cup Series regular can compete in the Xfinity Series. At one time, drivers like Kevin Harvick, Carl Edwards, Kyle Busch and Brad Keselowski made no qualms about competing in both divisions regularly, even when it involved frequent travel. Wind the clock back to the weekend of June 25, 2006.

The Xfinity Series raced at the Milwaukee Mile on Saturday night and the Cup Series was at Sonoma Raceway on Sunday. Six Cup regulars – Clint Bowyer, Busch, Edwards, Denny Hamlin, Harvick and JJ Yeley – all competed full-time in the Cup and Xfinity series in 2006. Sometimes different drivers practiced and qualified their cars, but they still made the trip to compete in the race. They were true Busch-whackers that season. The 2006 Xfinity season had 35 races, and series regulars won only two; David Gilliland and Paul Menard in back-to-back races at Kentucky Speedway and the Milwaukee Mile in June.

The demise of the Busch-whacker began in 2011 when NASCAR forced drivers to declare which series championship they wanted to earn points. There was no limit to the number of races a driver declared for Cup points could race in the Xfinity Series. But in 2017, NASCAR implemented start limits for Cup Series regulars in lower national divisions.

Today, the most Xfinity Series races a Cup driver with five or more years of experience can take part in is five, which began in 2020.

How could there be a Busch-whacker resurgence when by definition, it can’t happen? Terms evolve, and 2022 is a different landscape for Cup drivers than three years ago, pre-COVID-19. Arguably, the most significant change in the past three years, aside from introducing the Next Gen car, is the reduction in practice.

To keep the math simple, in 2019 the Cup Series typically had two 50-minute practice sessions in which the entire field could participate. That’s a total of 3,600 minutes of practice for the entire season. Original practice plans for 2022 allotted drivers 930 minutes of practice time for the entire 36-race season. That’s nearly a 75% reduction from 2019. But on Wednesday before the March 6 race at Las Vegas Motor Speedway, NASCAR announced that the field wouldn’t be split into two groups to practice for 15 minutes each. Instead, a single 35-minute practice session is planned. Any further changes have yet to be announced.

Drivers and teams have become accustomed to a lack of practice since May 2020, when NASCAR returned to racing after a two-month hiatus at the height of the COVID-19 pandemic. Now that the world is approaching pre-COVID norms, practice has returned with the introduction of the Next Gen car. This week at Auto Club Speedway was the first real test for Cup Series teams and drivers with their new cars.

You can label what Cole Custer did in the Xfinity Series race at Auto Club a 165-lap practice session for Sunday’s race. Custer was only four races into his Cup rookie season when the world came to a halt. As of this past weekend at Auto Club, he has practiced at 14 of his 74 starts dating back to the 2020 Daytona 500. He can’t physically test the car and has to rely heavily on simulation and what little practice he can get. And I’m sorry, but 15 minutes of practice in a brand new car isn’t going to lead to much of an education.

Custer won the Xfinity race on Saturday, turned around, and finished 11th on Sunday. Custer hasn’t had many impressive or memorable runs in his young Cup career. The reason for that is another conversation, but there is really only one consistent factor: a lack of practice. My gut tells me that he earned a top 15 in Sunday’s Cup race because of his track time on Saturday.

His time on track during the Xfinity Series race granted him more time to reacquaint with the track’s surface, tendencies as the race progressed, racing with multiple cars and the flow of restarts. Suppose Custer uses all four of his remaining opportunities to race in the Xfinity Series and five in the Camping World Truck Series. In that case, Custer’s performances in the Cup Series will improve.

Just about every major Cup Series team has a presence in Xfinity or has an alliance. After this weekend’s race at Las Vegas Motor Speedway, 30 races remain in the Xfinity Series season, with 18 eligible for Cup regulars to compete in. Setting sponsorship and funding aside, I believe that more Cup Series drivers will seek Xfinity rides in these 18 races to gain as much of a competitive advantage as possible. Maybe some will need a confidence boost, and turning in a top-10 effort in a lower series will check that box.

While the term Busch-wacker can’t return in its original, I believe a modern twist is worth talking about. I don’t believe Custer’s 11th-place finish in Sunday’s Cup Series race was a fluke. In Saturday’s victory, he learned and experienced things that gave him a competitive advantage over the field. And if he competes in the four more races he’s allowed, his performances in the Cup race will reflect the additional track time.

Each driver declared for Cup Series points has 10 opportunities – five in the Xfinity and five in the Truck Series – to get extra track time in a lower-tier race. Pay attention to the next 10 weeks in the Cup Series and see which drivers are struggling or mention lack of practice isn’t suiting their driving style. Then see how many of them find Xfinity Series rides in the summer months.

Resurgence?!
In my opinion the Busch-Whackers have never went away, they’ve just been limited. I’m not sure how much the extra practice time will help them with the new car compared to previous years, but it can’t hurt.

I’m not sure why practice time with this drastically different car is as short as it is. But it would seem that the racing would be better if teams had a better understanding of the car & the way it reacts to changes. That would seem to be a prime consideration for NASCAR.

I think I’ve heard that the curtailed practice would save the teams $$. That would be valid with the old car because of the wealth of experience they had with it.
But with the new car, if a car is wrecked because of a poor setup, even if it’s cheaper to fix, where’s the economy in that?

Another consideration is the TV package. It was sold to include televised practice sessions. It’s soon up for renewal, & while the casual fan might not watch. There’s a lot of us who do.

I agree with your post so much that there isn’t anything I can add.
Amen.