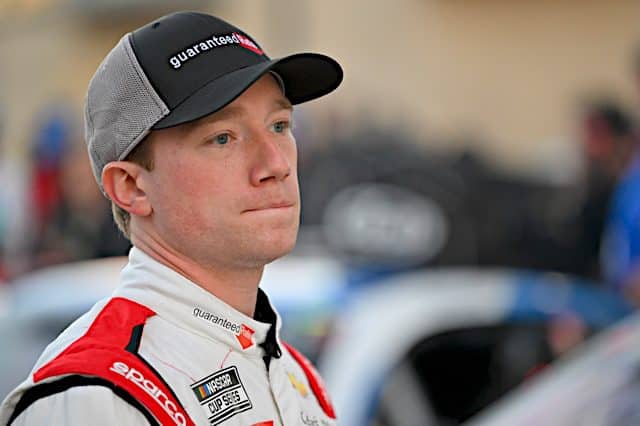 Chase Elliott wasn’t happy with Kyle Larson after he put him in the wall at Auto Club Speedway in the NASCAR Cup Series race. Will the two teammates patch it out, or will we see this tension carry into the rest of the season?

Chase Elliott‘s displeasure with Kyle Larson was a rare moment of conflict between two teammates that have won the last two Cup championships, and now the looming question is how the two will race each other going forward.

On the surface, the two will patch things out. They’re arguably the two best drivers in the sport today, and they were the biggest contributors to one of the greatest NASCAR seasons ever by an organization in 2021.

But at the same time, the two of them know that they will be rivals going forward. When Elliott won the championship in 2020, he was Hendrick’s No. 1 driver. And with Jimmie Johnson retiring, it looked like he would be the one to carry the torch for years to come. Just one year later, Larson posts a 10-win, 2,500-plus-laps-led season that nets him a championship in his first try with Hendrick Motorsports.

Larson has bested Elliott in the win column 11-2 since they became teammates, and Larson appears to have taken on the role as No. 1. Going forward, both drivers are going to do everything they can to make sure that they – respectfully – best the other. It will be fun to watch.

Auto Club tied a track record of 12 cautions in the Cup Series. Will Las Vegas Motor Speedway be a tame race, or another chaotic one?

For a race that had so many questions going into it, Auto Club overall was a success. The Next Gen car showed that its drivers are capable of passing other drivers with ease, and the race featured a variety of comers and goers.

That said, the race devolved into mayhem at times. It tied the Cup track record of 12 cautions set in February 2008, and it was the first 400-mile race at the track with more than nine cautions. The race featured multiple spins, two multi-car wrecks, a few blown tires and some Toyota overheating problems for good measure.

The drivers and teams are still adjusting to the new cars, so Vegas will likely feature more chaos than usual. The track is also shorter, narrower and higher banked than Auto Club, and that will provide drivers with a new host of challenges in adjusting to the car and the new style of racing.

Fortunately, the smoother pavement means that tire blowouts should likely be a nonfactor, but it will still take a handful of races for things to feel normal on the racetrack.

Tyler Reddick suffered the biggest heartbreak of his Cup career at Auto Club. How soon will he break through into the win column?

After ending last season with flashes of brilliance at Vegas, the Charlotte Motor Speedway ROVAL and Texas Motor Speedway, it looked like Tyler Reddick had finally put it all together in last weekend’s race at Auto Club. Reddick – who had only led 73 laps in his first 75 Cup Series starts combined – had led 90 of the first 151 laps of last Sunday’s race and looked to be cruising to a top-five finish at the very least. But everything fell apart on lap 152 when he suffered a flat tire, and an ensuing crash with William Byron left him with a 24th-place finish.

In addition to his strong showing at Auto Club, Reddick also looked to be one of the best cars in the Busch Light Clash at the Los Angeles Memorial Coliseum. Reddick, who started second, had led 51 of the first 53 laps before being sidelined with a drivetrain failure.

So far, Reddick looks to have figured out the Next Gen car, and it appears that it is now a question of when he will win rather than if.

He certainly has a chance this weekend at Vegas. In the final stage at the track last fall, Reddick was hounding Denny Hamlin for the lead until a poor final pit stop left him with a sixth-place finish. If he can shake off the outcome of last weekend’s race, he might be one of the fastest cars again this weekend.

Erik Jones ran top five all day at Auto Club for Petty GMS Motorsports. Was it the race of his life, or can we expect more from him throughout the season?

For all the hype that he had coming up to the Cup Series, Erik Jones has mostly underwhelmed. Even his freshman season at Richard Petty Motorsports last year was a slight miss, with just six top 10s on the year.

But last weekend, everything clicked. Jones raised eyebrows by qualifying second, and that qualifying run was no fluke. He led 18 laps, had an average running position of fourth, collected 18 stage points and finished third. It was an incredible performance for a driver and team (now known as Petty GMS Motorsports following a merger with GMS Racing) that had been treading water for years. And it begs the question of what Jones can do as a Cup driver.

It’s important to note that this entire season has a bunch of question marks due to the introduction of the Next Gen car. The Richard Childress Racing-affiliated cars appeared to have Auto Club figured out, as Reddick was the dominant car and Jones was right behind him.

It’s possible that Jones may regress to his performances of last season, but it’s also possible that Jones was being held back at Joe Gibbs Racing in a similar vein to Logano, who had just two wins in four seasons at JGR but then blossomed into a star at Team Penske.

Does Jones have the potential to follow the same trajectory? For now, it’s too early to tell. But if these performances continue, we’ll have to reconsider what Jones and Petty GMS can achieve in the future.

Reddick is too good a racer to not get a win soon. Flat tire was just plain bad luck. Even Larson knew he had nothing for Reddick. What did you expect for Jones running for Petty last year ! Help from RCR had to make Jones smile in the off season.

I was a friend with Erik’s late father, and have followed his career from his early days in Late Model Stocks. While his Cup results have been somewhat erratic, it was often due to factors out of his control. In 5 years, I believe he’s only been involved in one, maybe two wrecks of his own doing, but has often been caught up in others wrecks, especially at plate tracks. Also, his results his last 2 years at Gibbs were regularly effected by pit crew mistakes that included loose wheels. slow stops, pitting him out of the box, and over the wall too soon.

Last edited 3 months ago by gbvette
1
0