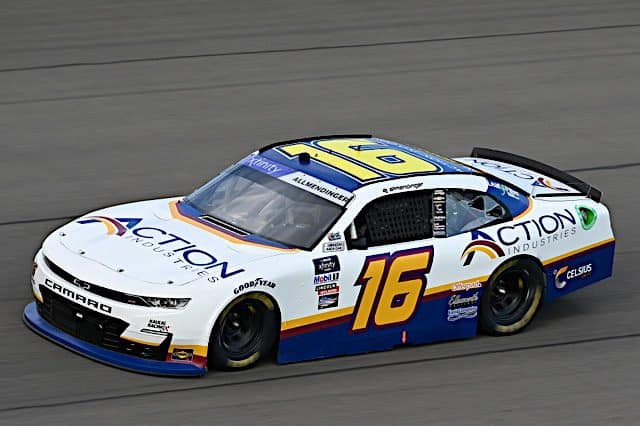 As the second-to-last driver to post his qualifying lap, AJ Allmendinger posted a speed of 184.187 mph, a lap so blisteringly fast that it was a full mile per hour faster than second place. That lap proved to be the fastest, and Allmendinger will start on the pole at Las Vegas Motor Speedway for the second weekend in a row in the NASCAR Xfinity Series.

Josh Berry posted the second-fastest time, and he will start alongside Allmendinger on the front row for Saturday’s (Mar. 5) Xfinity race. It is also the highest that Berry has ever started in a Xfinity Series race, beating his previous best of third at Talladega Superspeedway last fall.

Riley Herbst qualified third, which means that each manufacturer will be represented in the top three starting positions. Noah Gragson, who posted the fastest lap in today’s practice session, will start fourth, and Landon Cassill posted the fifth-fastest time. However, because of a blown engine in last weekend’s race at Auto Club Speedway, Cassill will be forced to drop to the back during the pace laps.

See also
Eyes on Xfinity: Resurgence of the Busch-Whacker?

Jeb Burton had a near-miss in practice, as he had a tire go down but was able to save the car. Unfortunately, the same tire went down during qualifying, and Burton crashed into the turn 2 wall. It is currently unknown if the team will be able to repair the damage in time.

With 38 spots and 41 entries after Will Rodgers withdrew, three drivers failed to qualify for tomorrow’s race. The unlucky three were Stan Mullis, David Starr, and Josh Williams.