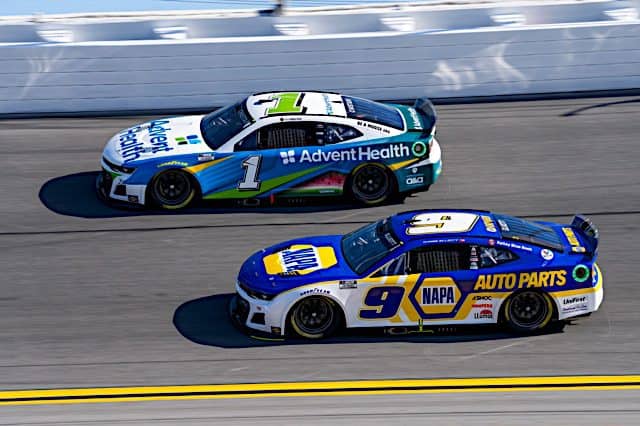 The sparkling new NASCAR Next Gen (time to stop calling it that, since it’s not “next” any more) racecar has hit the track in competition three times now. It’s shown some promise, but it’s not without its issues — and question marks.

The tracks it’s raced on so far are vastly different: the quarter-mile temporary surface at the Los Angeles Memorial Coliseum, the 2.5-mile high-banked monster that is Daytona International Speedway, and the flat 2-mile Auto Club Speedway, so if there was little to take from track to track, that’s understandable.

But we’ve seen some decent races so far in 2022. So far, there’s some promise in the new car, but it’s not without problems — fairly big ones — and unanswered questions.

For the most part, the Next Gen car raced well at Auto Club Speedway. In particular, running in the lead didn’t seem to be as big an advantage as it was in the past. It wasn’t easy to pass for the lead, but it looked as though it was easier to run down the leader, or harder for the leader to run away from the pack.

Frankly, it should be hard to pass for the lead, so the fact that it was isn’t a bad thing in itself. It was difficult to pass on the bottom, and the lead driver protected the top as is his prerogative. The momentum of the top groove definitely was an advantage for the leader.

Being the leader is always going to be an advantage. The difference here was that it seemed to be an advantage because the leader had the preferred groove, and less simply because of aerodynamics. Aero is and always will be a thing, and create an advantage, because, well, physics. The best hope is to minimize it. This car seems better on that front, though one intermediate track doesn’t really tell us much. Those tracks still represent the majority of the schedule and how the car performs there is important because they’re also generally the least exciting tracks the Cup Series visits.

It’s good that the cars are hard to drive, and we’ve seen some interesting results because of that. This year boasts the most different drivers with a top 10 finish through two races in almost 50 years (1973). Yes, one of those races was the Daytona 500, where unexpected names do make an appearance at the front. But Fontana saw nine different organizations score top-10 finishes. Only Stewart-Haas Racing had two cars in that group; Joe Gibbs Racing had none.

That variety is good for NASCAR. It’s good for fans because it’s different. It’s good for teams. If one thing continues to be a trend this year, this is the one that benefits everyone the most.

The first questions about the new car’s durability came at the Clash in Los Angeles, where drive train issues popped up. Those didn’t cause major issues at Daytona or Auto Club, but new issues arose with wheels and tires, particularly at Auto Club.

At Daytona, several teams lost wheels, and they weren’t all due to pit crew error with the new single-nut hub. Also at Daytona, it became apparent that a flat tire with no inner liner was a much bigger problem than it was in the past when they had the tire-within-a-tire to help them limp back to the pits.

The race at Auto Club put an exclamation point on that. Not only were cut tires a major problem, causing multiple cautions for the resulting spins, but once a car came to a stop after a spin, it was really hard for them to get going again. Instead, they spun their wheels in place and had to wait for safety workers to help them.

Speaking of the safety workers, several teams also expressed worry that towing the new car on a tow hook could damage the cars — especially concerning for teams as they have very few cars in their stables to start the year. Loading them on a flatbed apparently isn’t easy either if there are wheel issues.

If we’re honest here, it’s still just about everything.

Obviously, it’s too early to give a final verdict on this car. It will be weeks if not months for teams to work out bugs and figure out the tweaks and adjustments they need — once that happens, there may be less parity than we’re seeing now, which would be a shame.

See also
Dropping the Hammer: So Far, So Good for NASCAR's Next Gen Era

NASCAR has work to do to resolve the above problems, and how long that takes and how it happens will make a difference. That will play into how teams deal with the issues as well.

Will it race as well at other intermediates as it did at Fontana? If it does, that’s a major step in the right direction. If not, well, it’s awfully expensive for teams for more of the same.

How will drivers adapt to it, particularly those who were especially successful in its predecessor or the older drivers in the field? Particularly for the drivers who have raced the last three or four generations of car. We’ve seen it happen to the best of the best—at some point the cars change from what they raced for so many years, to the point where they struggle to adapt.

Finally, and most importantly, we’re still learning about the safety of this car. It seemed more stable on track at Daytona, which is a very good thing, but there was still a flip.

There was massive damage to the frame of Ross Chastain’s car after a practice crash in California last weekend. If that’s by design, to protect the driver, then it worked. But if it was unexpected, it’s concerning.

The bottom line is that this car does have potential. If it makes clean air matter less, that’s a major positive. If the body is durable, great. If there’s more parity because of it, fantastic. But it’s too early to call it a major success… or to call it a failure. It’s just that now, we have some ideas where to look for the answers.

Here’s my take on the new car. I think it has tremendous potential, but remember that the definition of potential is something that hasn’t happened yet.

I know that the debut was pushed back a year due to the pandemic, but the entire future of the sport is depending on this being a success.

My take is that it was still put out there warts & all, a year too early.

With an intensive additional year of testing, (it wouldn’t all have to be done by the teams) the problems we’re seeing could have been identified. And worked out, & the supply problems should have been sorted out as well.

What I’m seeing on track, is like a major Broadway play opening directly on Broadway. Rather than opening on the road to work out the kinks, to allow for a seamless BW opening.

They’ll get it right eventually, but it’s still going to be rough, & rocky (and looking somewhat amateurishly until they do.

People on Nascar Now Radio were giving the new car A grades this week, but until they solve the flat tire problem, it’s not worth more than a C+. Getting stuck and having to be towed because of a flat? Seriously?