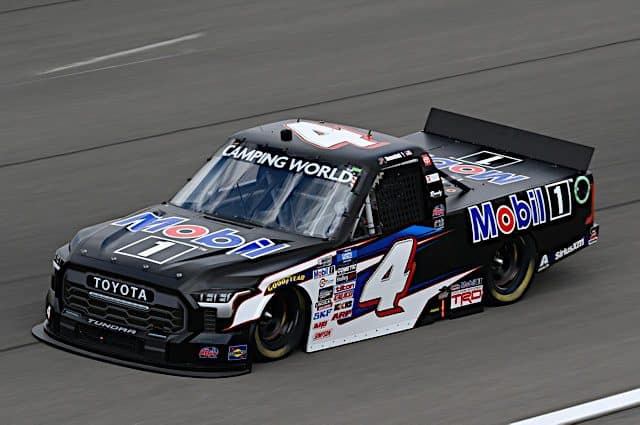 Toyota trucks dominated today’s (March 4) practice session, and they backed it up by dominating qualifying. After posting the second-fastest practice time, John Hunter Nemechek posted a lap of 178.583 mph to win his third NASCAR Camping World Truck Series pole, his first at Las Vegas Motor Speedway, and his first since 2018.

Nemechek’s team owner Kyle Busch posted a speed of 178 mph flat; he will start on the front row alongside Nemechek for tonight’s race. Chandler Smith qualified third, making it a clean sweep of the top three spots for Kyle Busch Motorsports.

Zane Smith backs up his win at Daytona International Speedway by qualifying sixth, while Matt Crafton and Tanner Gray will start seventh and eighth, respectively.

Daytona runner-up Christian Eckes will start ninth, while Ty Majeski — who was fastest in today’s practice session — will round out the top 10.

The fastest Chevrolet drivers were Grant Enfinger and Carson Hocevar; they will start 11th and 12th, respectively.

Matt Jaskol was the lone driver who didn’t qualify for the race. After failing to qualify for the first two races this season, Jaskol will replace his G2G Racing teammate Brennan Poole in the No. 46 Toyota. As a result, Jaskol will have to start this race at the rear of the field.

The Victoria’s Voice Foundation 200 will take place on Friday, March 4, at 9 p.m. ET, with TV coverage provided by FOX Sports 1.