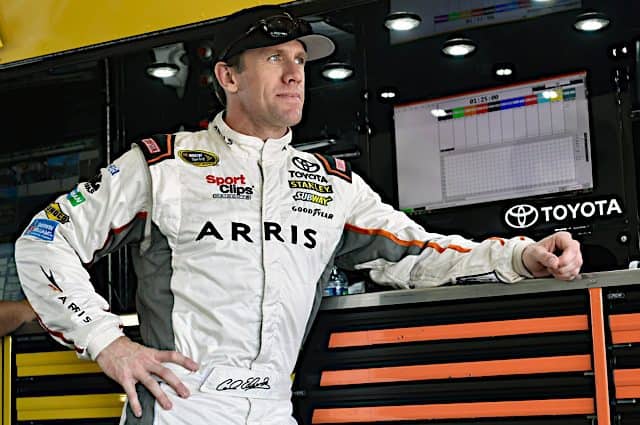 I’ve enjoyed the rotation of drivers in the FOX booth this year. Who else do you want to see appear in it? – Skip L., Arlington, Virginia

I’ve enjoyed it too, Skip. I’ll be honest — when the concept was first announced, I wasn’t a huge fan. I’m for continuity and consistency in the booth. A good duo or trio can get to know each other and develop on-air chemistry which is so crucial for a viewer when tuning in, especially for 3-4 hours.

The first driver that comes to mind is the mystery man: Carl Edwards. He’s appeared on Race Hub in recent years, so definitely has a connection with somebody at FOX Sports. But an in-race broadcast? Would he even be down to try something like that?

You don’t know until you try. And according to lead play-by-play announcer Mike Joy, they have.

Whether they’ve received an answer is another story. But given Edwards’ lack of public appearances and social media presence, I wouldn’t bet on him being alongside Clint Bowyer and Joy anytime this season.

Mark Martin made a surprise cameo in the booth this past weekend at Fontana. I think he’d do a great job and provide perspective on the sport that Tony Stewart, Matt Kenseth and Danica Patrick don’t have. He may not know too much about the Next Gen car, but he knows enough about the sport to keep anybody entertained for a few hours.

As does Bobby Labonte, who regularly appears on Race Hub. That’d be an easy addition for the booth to make, given his nature as a fan favorite and the fact that he still races (!) and has for awhile.

.@Bobby_Labonte is returning to the @SMARTMods_ for 2022, with continued backing from @CookOut .

Heck, what about throwing him and brother Terry in the booth simultaneously? Maybe for a Texas race, given they both hail from Corpus Christi.

Greg Biffle (when he’s not driving) would sure to bring some humor (just check his tweets), Jamie McMurray (also in the FOX family) has proven his hand at television as well. What about a reunion of sorts with Jimmy Spencer in the booth? The FCC would probably have FOX on speed dial, but damn it’d be worth a watch!

The possibilities are endless with who FOX wants to put in the booth. But can we all agree on one thing?

Put Larry McReynolds back up there. Why he was ever taken out was a travesty. The man has more knowledge about racing in his pinkie fingernail than every NASCAR fan put together. And he’s also really, really good on television.

I’m #TeamLarryMac, because America’s Crew Chief deserves to be in front of America on a more consistent basis every single week.

There’s been some more chatter about the Chicago street course. Do you see a street circuit on the NASCAR schedule next year? – Irene R., Cleveland, Ohio

As it goes nowadays in the NASCAR Twitterverse, Adam Stern of the Sports Business Journal reported that while the sanctioning body remains in talks to bring street course racing to downtown Chicago next season, the complexity of the deal may see it delayed or collapse altogether.

.@NASCAR remains in talks to bring a street race to @Chicago, and the working goal is to hold the event for the first time next season in 2023, per sources.

➖ The talks are said to be ongoing and complicated, so they could still collapse without a deal. https://t.co/M4vKb5aCPb

To answer your question, Irene, I just don’t think this comes together for next season. Given the global supply chain issues, it’s tough for me to envision a street course race of any kind happening in 2023.

2024 could and would be a different story, though. With the world (hopefully) back to somewhat normal functionality wise, cities, politicians and all the other hoops needed to jump through to make an event like that happen.

I wish it was as simple as packing up, going to Long Beach/Belle Isle/Montreal/insert whatever North American street circuit here, coming in before or after IndyCar/Formula 1 races there, let NASCAR do its thing, pack up and then go home… but it’s not.

It’s pretty easy to mock up one on iRacing, but real life is a whole ‘nother animal. I do think NASCAR wants to explore street courses and wants to do so in major metropolitan areas. But it’s already March, and a schedule presumably will be coming out in a matter of months. If things aren’t remotely closed to being finalized now, they may as well do it right, not rush the process and punt to 2024.

Kyle Petty. I know, NBC contract. But for the good of the sport. Also, if you can find him, Gary Nelson; Tim Brewer;

Tony Stewart doesn’t have the perspective on the sport that Martin has–LMAO.

First off, Janice’s suggestion is most important.

I think it would be interesting to do exactly what they did last week. Have a guest announcer every week to cover the entire race and invite an old-timer (someone that hasn’t raced in NASCAR for at least 15 years and isn’t seen much) as a guest during stage 2.
Sterling Marlin, Jimmy Spencer, Rusty Wallace, Kenny Schrader, Ricky Rudd, Bill Elliott, Ward Burton (with an interpreter of course), Geoffrey Bodine, Joe Nemecheck, Bobby Allison, Dave Marcis, etc..
But not the Waltrips until they have been off the air for at least 10 years.

“I propose the use of guest analysts put into groups where the individuals are paired with peers who share commonalities. Some examples:

Ooh, how about the Wallace family? Mike, Kenny, and Rusty?

LOL,,, that booth would be getting awful crowded since Joy and Bowyer are givens.

But also No Danica Patrick, there are plenty of tapes of her doing previous broadcasts and she does NOT even bother to do any research. She is horrible in the booth, ANY booth, as bad as the Waltrips. Please stop using her, she does NOT offer any valuable information.

A.B.D. Anybody but Danica!

I always thought that Ricky Craven and Wally Dallenbach Jr, both did a good job. Even though they haven’t been active in Cup in quite a while, I wouldn’t mind seeing either of them back in the booth.

Funny thing, I’d forgotten all about Dallenbach till this past weekend. I was at Sebring crewing for a vintage racer in the SVRA vintage & Trans Am races, and Dallenbach was there competing in the Trans Am race. It was his first pro race appearance in 15 years, and he finished 2nd!

Last edited 3 months ago by gbvette
0
0

This is a no brainer, Jamie Little to replace Adam Alexander and while we are cleaning house Shannon and Kaitlin as co hosts on Race Hub every night.