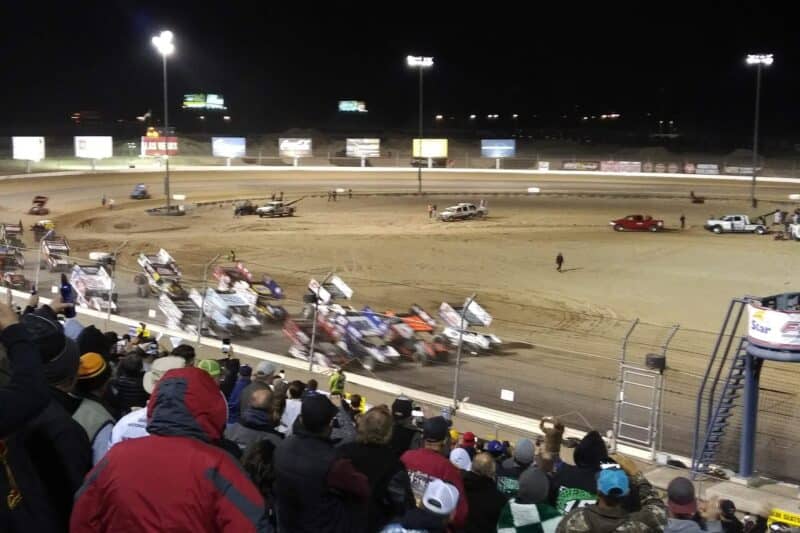 Those looking for a dirt racing solution to their motorsports fixation will have to drive a little ways this weekend, though there’s a good reason to do so; the tremendous reduction in seating capacity at Las Vegas Motor Speedway has kept its single-day race tickets among the most expensive tickets on the NASCAR Cup Series circuit; as of this writing, the cheapest available tickets anywhere in the grandstand are going for $131.18 after fees.

For those looking to have some dirtier fun out west, here’s the options. Even with gas likely to hit $5 a gallon soon, these roadtrips may still be cheaper than a Cup race at Vegas.

A Racing Buffet in a Desert Oasis

Las Vegas is well known for its buffets. Race fans looking for one of the motorsports variety need only take a two-hour jaunt south down US-95 to Mohave Valley Raceway in Arizona to find it. A standard weekly racing program, Mohave Valley will have seven classes of cars racing Saturday night, ranging from the Dwarf Cars of Arizona up to the headlining IMCA modifieds.

Dwarf cars, for those unfamiliar, are essentially the West Coast equivalent of the Legends cars run in the South, and are the same vehicles that Cup Series stars Kurt and Kyle Busch cut their teeth in growing up.

Meanwhile, the track has averaged a double-digit car count for the IMCA modifieds across the first four features contested in 2022.

One hugely important note for fans opting to make the trick to MVR this weekend; the track is CASH ONLY and does not have an ATM on site. Though any race fans making the trek from Las Vegas damn well better have some cash on hand.

For those fans that for whatever one of many valid reasons chose not to attend NASCAR’s races at Auto Club Speedway last weekend, there’s racing on the docket in the same area of California this weekend. Opening the 2022 season at the Perris Auto Speedway is the track’s annual Night of Destruction.

Besides the typical fairgrounds fair, including figure-eight racing and trailer races, the track’s mini stocks will be contesting an oval-track race for the traditionalists in the crowd.

For those looking for some spectacle and a departure from NASCAR’s new adherence to kit racecars, check out the track’s “double-decker” division.

Puts a new spin on “eight wheels are better than four” doesn’t it?

One Less Way to Play Dirty in Pahrump

If it seems like it’s a hike to find dirt racing in the Vegas region this weekend, it’s because the old go-to venue for those seeking short-track action has gone by the wayside. The Pahrump Valley Speedway a mere hour outside the city was recently sold, with no announcement made in the month since the track sold that the dirt track would resume operations for 2022.

The Pahrump Valley Speedway has sold for a reported $800,000 dollars to an unnamed individual. Previous owner Chad…

Sadly, that leaves the town’s infamous brothels as the only way to play dirty in Pahrump. Though if one scrolls the comments on the above Facebook post, which comes courtesy of a local news reporter in the area, there are rumblings that the party that purchased Pahrump Valley are backed by Kyle Busch and intending to pave the facility. As Kurt Busch recalls, much of the Busch family’s early racing ventures came at Pahrump Valley.

At the time of this writing, the cheapest seat available for Sunday’s Pennzoil 400 at Las Vegas is $131.18, including fees.

Also of note, a pit pass at either of the above listed venues are available for purchase by the public and all win run less than the $131.18 needed at Las Vegas on Sunday.