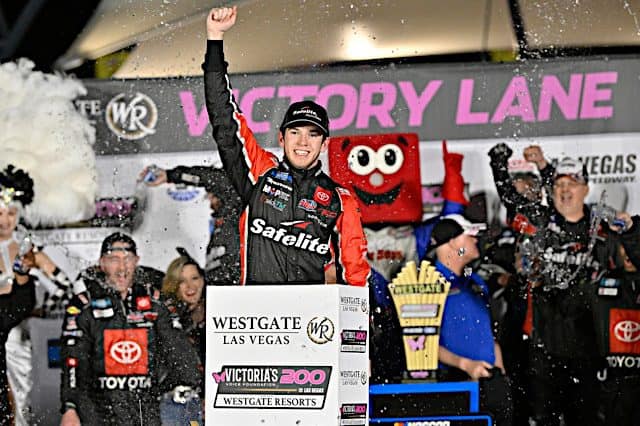 Chandler Smith outdueled Zane Smith after a late-race restart to take his third career NASCAR Camping World Truck Series victory and first win of 2022 on Friday, March 4 at Las Vegas Motor Speedway. Finishing behind the duo were Kyle Busch, Stewart Friesen, and Ryan Preece to sum up the top five. Tanner Gray was later scored as fifth after Zane Smith was disqualified in post-race inspection.

It was Chandler Smith that scored the jackpot in Las Vegas, but fellow surname holder Zane Smith was one lap short of scoring a second-consecutive Truck Series win in 2022.

Zane Smith restarted with the advantage over Chandler Smith on the final restart and with two laps to go, had him cleared on the backstretch.

Amidst a near-crash for youngster Derek Kraus, the driver of the No. 18 Toyota threw it into the outside of turns 3 and 4. The two Smiths were side-by-side under the white banner as they crossed the line for the last lap.

It was advantage Chandler Smith as they entered turn 1 for the last time, but that was only until team owner Busch attempted to make a run on the duo on the top lane. Chandler Smith moved up to block his employer, and Zane Smith was able to clear the Toyota onto the backstretch.

But only for a second.

The 19-year-old crossed over using the momentum he had gathered by using the same top lane his truck owner had attempted to use. Chandler Smith darted quickly to the bottom and took the lead from the FRM driver while entering turn 3, and that was all she wrote.

Replay of the finish at Las Vegaspic.twitter.com/INJ5hVFxiJ

Despite not winning, it’s still Zane Smith’s best finish in a Truck Series race at Las Vegas. In addition, the No. 38 Ford team continues opening the 2022 season with another impressive run. Unfortunately, his second-place finish would not stand. The team was disqualified after failing post-race inspection.

You wouldn’t know it by looking at the stages’ winner, but Kyle Busch Motorsports was the team to beat all night.

In fact, it really started in the afternoon during qualifying.

After John Hunter Nemechek, team owner Busch and Chandler Smith all swept the top three starting positions in the day’s time trials earlier, the KBM trio remained in the top 10 and were contenders for the lead often.

3-for-3@KBMteam trucks are leading the way. Who can crash their party? pic.twitter.com/hPnk9ie4LB

If it weren’t for those pesky pit strategy calls during the middle of the event, the team would have likely swept the stage wins as well.

Instead, that honor, and 20 extra points, went to defending series’ champion Ben Rhodes after staying out during a late-stage caution while the KBM team pitted before the end of the second stage.

Rhodes held off hometown hero Busch for the stage two win and completed his sweep.

With Rhodes stealing the stage shows, KBM capitalized when he pitted and occupied the top three early in the final stage.

One of the only drivers that was able to compete with the trio was young gun and Daytona International Speedway winner Zane Smith. Unfortunately for the Front Row Motorsports driver, he became subject to a pit road speeding penalty which put him behind late in the event and out of contention.

Or at least it did at the moment.

A wreck from stage sweeper Rhodes capped off a pattern of cautions and triggered a restart with 24 laps to go.

A big hit for Ben Rhodes in Las Vegas after contact with teammate Ty Majeski. pic.twitter.com/si1zRef99c

KBM was still the top three trucks on the restart. After a challenge from former KBM driver Christian Eckes, the trio was divided when the caution came out with less than 18 to go.

The three restarted on the outside lane front-to-rear with Eckes restarting on the bottom. The defending series Las Vegas winner from last September had a strong restart while Busch struggled on the outside. However, Busch rallied back to battle his former employee and had a run for the lead spot on the bottom.

Eckes tried to throw a block, but it was too late.

Replay: Christian Eckes goes around after a battle for the lead with Kyle Busch! pic.twitter.com/eRYRWyUBtF

With Eckes out of contention, it set up a thrilling battle for the win with less than 10 laps to go.

However, the problem for the KBM team was the return of Zane Smith, who recovered from his speeding penalty to rally back into the top five.

It was a battle of Smiths to the checkered, with Chandler Smith winning it for KBM as team owner Busch finished third. Nemechek was caught up in a crash with one lap to go and finished 26th.

Return of The Onion

It was a return almost a decade in the making.

Two-time series champion Todd Bodine finally returned to hectic Truck Series competition for the first time since his last series race in 2013 to make six more starts in what is meant to be his last season before retirement. To boot, the “Onion” was coming back in the No. 62 for Halmar Friesen Racing — a team owned and driven by Friesen — on his quest to make 800 career NASCAR starts. In other words, he’s racing in his final season with a team that has won in the past and is known for constantly running up front.

Not many expected Bodine to be competing for the win in his first race of the year, but Friday night was meant to be a great opportunity for the veteran to shake off the rust accumulated over the course of almost nine years.

Unfortunately, there was a lot of rust to shake off.

The 58-year-old’s rough night started early after his first visit to pit road in 2022. After a minor miscommunication with his team, Bodine placed his truck in the wrong gear while trying to reach his stall. It threw off his RPMs that NASCAR drivers use to gauge their pit road speed, and the veteran sped through multiple sections.

Bodine was given a speeding penalty and was sent to the rear of the field.

His night didn’t get better.

After a spin on lap 56 and making initial contact with the wall, Bodine remained in the back for a while trying to pick up the pieces.

With an already-damaged truck, the New Yorker was running his own pace when he began to complain about how loose his Toyota was becoming.

Bodine had gone multiple laps down late in the event and was well in the back of the field.

Luckily, there is a silver lining to being in the back of the field — it’s away from trouble.

Thanks to a few late-race cautions involving many front-running trucks, Bodine had found himself pack on the lead lap by the end of the race and was able to rally to a 22nd-place finish.

The result was far and away from the glory days of the Onion’s championship-winning seasons, but much better than where he almost ended up in his long-awaited return.

With the rust shaken off, Bodine will return at Darlington Raceway in a few months to resume his quest for 800-career NASCAR starts.

Rookie of the Race: Thompson (12th)

Point Report: A win on Friday night grants Chandler Smith a spot in the Truck Series playoffs in 2022 and the points lead after two races. Daytona winner Zane Smith is still in the playoffs after being disqualified in post-race inspection. In regular season standings, he is 12th.

Matt DiBenedetto adds another top 10 with a sixth-place finish at Las Vegas and is likewise sixth place in the standings. Despite a rough night, Carson Hocevar runs seventh with Austin Wayne Self and Matt Crafton completing the top nine.

Tied for the playoff cut line with Crafton is Nemechek with Eckes close behind by only two points in 11th.

Todd Bodine is back in the Truck series 🤩

A lot of good trucks, including the 91, 1, 61 and 38 collected damage on the restart. #VictoriasVoice200 pic.twitter.com/LT8INZ1Fcq

I guess we are making up for a relatively clean Daytona.

Now you see him, now you don’t

Up Next: The Truck Series takes a weekend off before heading to Atlanta Motor Speedway for the third race of 2022. Coverage for the Fr8Auctions 200 Saturday, March 19 at 2:30 p.m. ET on FOX Sports 1.

They say Zane Smith was DQ’d due to a lug nut violation. Can someone explain what the violation was?

Three or more missing (or not tightened to the wheel) lug nuts is a DQ per 2019 rule update.