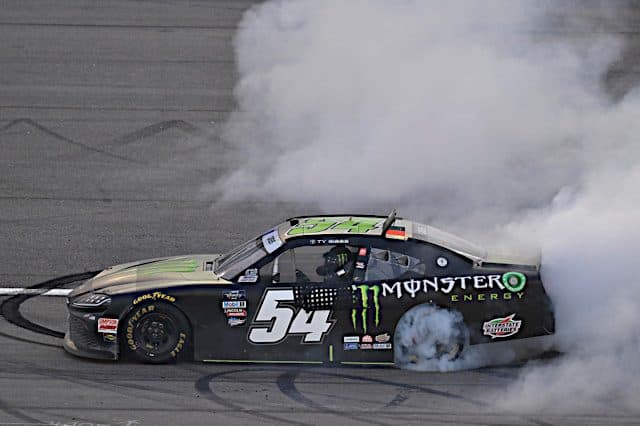 In his first full season behind the wheel of a NASCAR Xfinity Series ride, Ty Gibbs took home the win at Las Vegas Motor Speedway in the Alsco Uniforms 300.

Gibbs has made 21 Xfinity Series starts, and has now won five of them, stamping his name as one of the best up-and-comers in the sport. Gibbs’ win wasn’t without controversy, though. He and Ryan Sieg went back and forth for the first part of the race after Gibbs spun Sieg during the early laps.  That wasn’t the only fireworks for the day, though, so let’s dive right in.

Well, to start, there’s Gibbs. Obviously he took home the checkered flag, but the Sieg saga simply can’t be summed up by a few words in an intro.

Gibbs turned Sieg’s No. 39 Ford Mustang on lap 3, and it couldn’t have been more blatant. Gibbs shoved his nose underneath Sieg in a bad situation, and just straight up spun him. Maybe it was just one of those “Ah, he’s just a kid” moments to a lot of people, but Sieg certainly didn’t seem to think so. During the red flag for some precipitation (don’t worry, we’ll get to that), Sieg and Gibbs had quite the animated conversation on pit road. Sieg tried to get Gibbs back for the early spin by squeezing him against the wall, but it didn’t quite work out. Check it out.

Our second winner of the day goes to Landon Cassill. Cassill had a hot weekend in a very bad sense of the phrase last week, when an unexpected on-board fire put him out of the race early. Thankfully, Cassill walked away unscathed and he and the Kaulig Racing team were able to put together a very competitive car this week. Cassill wound up earning a sixth-place finish, locking all three Kaulig drivers inside the top 10 with Daniel Hemric a solid third and AJ Allmendinger rounding out the order in ninth. Cassill’s bounce back this week might go unnoticed due to the aforementioned theatrics, but it’s still worth a shoutout.

First up, Noah Gragson. Despite finishing in a more-than-solid second, it was Gragson’s teammate Justin Allgaier that pushed Gibbs to the win ahead of his JRM teammate Gragson. To make it worse, Gibbs even twisted the knife a little bit post-race.

“That helped me out a lot,” Gibbs said of Allgaier’s efforts, “I had a fun time racing with the JR (Motorsports) cars … Hopefully, we can keep it going and win some more races.”

It really is your own people sometimes, isn’t it?

Last on our list is the fans in attendance. I know they made it to the “Winners” section last week, but hear me out – it snowed in Las Vegas. I have no earthly idea about how that happens, as I do not claim to be a meteorologist, but there has to be some kind of hex over the track for that to happen in the desert. I don’t know if they picked up some voodoo magic with Mardi Gras going on or what, but there was some serious silly season shenanigans going on.

We talked about the bounce back Cassill had earlier, and as the old saying goes, look good play good, right? Well, Cassill certainly played good, or drove good if that’s what you prefer, and he certainly looked good doing it in this StormX scheme that Kaulig Racing announced earlier this week. I’m usually not a fan of the whole fading into different colors thing, but for this specific scheme and color combo, it really works. There’s no logos to break up the fading transition, and it produces a much cleaner look than most schemes that try the same thing.

.@landoncassill is ready to storm to the front at @LVMotorSpeedway!

Ty Gibbs is one of the most controversial characters in the Xfinity series this season, as his social media presence and cavalier on-track attitude mixed with his golden boy post-race interview tones tend to create some disdain within the NASCAR twitter and fan communities. Whether those people like it or not, Gibbs is locked into the playoffs in his first full season now, and will undoubtedly be looking to bring home some more purse change while he’s playing with house money. The reason I say all this is to point out this undeniable fact — the villains we all know and admittedly love are growing old. Kyle Busch has retirement rumors floating around him, and Brad Keselowski, despite running with a fresh Cup team this season, is obviously setting himself up for the ownership route and is on his way out the door.

With that being said, NASCAR always needs people to pit against each other, whether it’s for the dark side or not. Could we be watching another villain arc right before our very eyes in the Xfinity Series, or could this be the start of a budding hero that’s making a hard charge for a Cup Series ride? Only time will tell, but no matter what you think about him, Ty Gibbs can drive, and at just 19 years old, he’s going to be around for a while.

Next up on the Xfinity series schedule is the LS Tractor 200 at the ever-famous Phoenix Raceway. As most fans will remember, Daniel Hemric won the series championship the last time he was at Phoenix and took home his first Xfinity Series win in the process. Hemric obviously knows the track, but will he be able to repeat in his new Kaulig ride? We’ll find out next Saturday (March 12), as the green flag drops at 4:30 p.m. ET and will air on FOX Sports 1.

Justin’s only shot to win was to push Gibbs hard. But Justin had a long green flag great car. Without that push, his teammate Noah probably wins the race. Gibbs is now in and now has all season to risk everything every chance he gets. I wonder how many Cup starts grandpa is going to give him this year. Why not would be my thinking.

So you are thinking a 3rd 23XI Racing car?

I honestly didn’t think about what car. But the kid is a fast learner, I’d somehow get him Cup starts, absolutely no reason not to, especially this year.

With the learning curve by everyone with this cup car, Gibbs might instantly take to the car. You never know. Find out soon is what I would do.

Well there aren’t a lot of Toyota teams to choose from, and I doubt any of the other manufacturers would want to help develop a driver that’s destined to drive a Toyota.

the kid drives his car like it’s a weapon with no regard for anyone else.
it is racing but there’s a limit to what’s acceptable.
It’s only a matter of time until he hurts himself or someone else.

I love Ty Gibbs victory interviews. It reminds me of a TV evangelist. WWJT about obnoxious burn outs?

Reverend Joe could put his mother in the 54 and it would win.