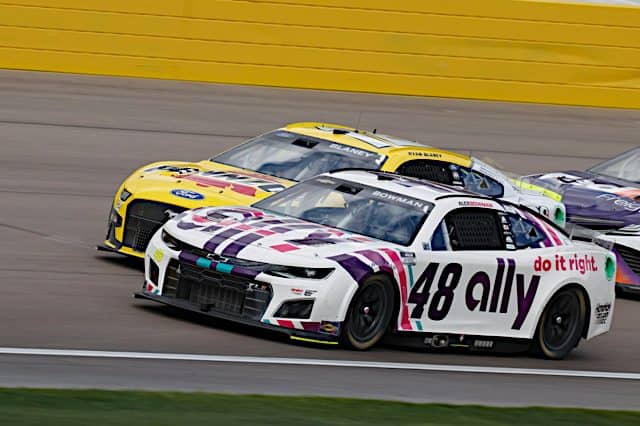 Las Vegas was built on gambling, and it was a two-tire bet late in the race that gave Alex Bowman the win in Sunday’s (March 6) Pennzoil 400 at Las Vegas Motor Speedway. A two-tire stop as the race went into NASCAR Overtime gave Bowman a front-row start, and from there, he was able to get around teammate Kyle Larson to take the win.

It’s Bowman’s seventh career Cup Series victory, his first in 2022 after a four-win breakout in 2021. After terrible luck at both Daytona International Speedway and Auto Club Speedway, Bowman showed patience throughout the day at Las Vegas, letting the race come to him and capitalizing on the late caution to turn a solid day into a great one. Bowman’s just coming into his own as a driver, and he’s exceeding expectations.

And don’t forget… Aric Almirola. He started a forgettable 20th Sunday and didn’t really look like a contender all day. Yet while he wasn’t racing for the win, Almirola put together his third top-10 finish of the young season, the only driver to score a top 10 in every race this year. With only five top 10s all year in 2021, it’s clear Almirola’s starting his final season in fine form.

Inevitably, the talk after last week’s race at Auto Club was about tires. Moving forward, many wondered if they would hold up better on a newer, smoother surface in Sin City?

Thankfully, they did. There were some spins and brushes with the wall, causing another 12 caution flags in this race. However, they came from a variety of factors. Drivers are still learning to handle the cars in traffic and some mishaps are to be expected.

Will mid-race tire strategy become a thing of the past? That’s another question altogether. While some tracks are harder on tires than others, the teams that tried to play the strategy game by taking two or even none didn’t fare well on Sunday.

Sure, it worked on the final caution, carrying Bowman to the win, but the call only worked on that very short overtime run with two laps remaining. On long runs, the cars who tried to gamble got eaten for lunch. That’s a trend that could change at different tracks and as teams get a better handle on things. But will we see a vital part of race strategy taken away?

Pole sitter Christopher Bell had a fast car and looked like he’d be running up front early. He finished 10th in stage one and was looking for more until a spin on lap 141. That brought out the third caution of the day and derailed Bell’s afternoon. He bounced back to finish 10th but wasn’t a factor for the win.

Defending race winner Kyle Larson almost pulled it off again but didn’t have quite enough for Bowman on the final restart. Larson finished sixth and third in the first two stages and looked like that was exactly the range he’d wind up in. But his late pit call gave him a few spots and a shot at the win, even if he had to settle for the runner-up result.

Hometown heroes Kurt and Kyle Busch had different days. Kurt started in the back but had a solid effort, exactly the kind his new team needed to have. He moved forward all day, led a few laps, and cracked the top 10 late in the game. While finishing 13th, his team is still learning to gel and days like these go a long way for new ones as they grow.

Kyle Busch hasn’t looked comfortable in the new racecar until Sunday. He had a moment early, getting sideways when Austin Dillon checked up in front of him. While all turned out well, it happened because he was running in a pack instead of up front. But Busch did get to the front eventually, leading three times for 49 total laps. As clouds cooled the track, he had the car to beat for a while and was in position until that final caution. In the end, that winning look hasn’t quite come together yet even though it looked like it was close.

Active Vegas win leader Brad Keselowski is doing an admirable job of bringing his team back to relevance after a few years of decline. He led three laps Sunday and has the No. 6 looking racier than it has in recent years so far in 2022. He spun on his own on lap 103, collecting Ryan Blaney, but was able to stay in the race and finished 24th.

The varying tire decisions on the final caution of the day changed the complexion of the race about as late as it can be changed. Before the Erik Jones spin that also indirectly collected Bubba Wallace, it was probably going to be a 1-2 finish for Joe Gibbs Racing, with Kyle Busch and Martin Truex Jr. settling it between themselves. Instead, that caution allowed for some Las Vegas gambling and it came down to tires and lane choice. Larson, who was leading the race after stops, took the high side, betting on momentum to carry him, while Bowman took the bottom. He was able to make the low line work long enough to clear Larson.

It’s yet another test for the new car as the series heads to flat one-mile Phoenix Raceway. There was testing at Phoenix, but this will be the first time teams are really racing the car at the track, and it’s completely different from anywhere they’ve visited so far this year.

It’s also the place where the title race will roll off in November, so look for some teams to already have one eye forward as they work to win on Sunday. There will be far fewer questions when they return in the fall, but this is a track with a lot at stake, so any answers they can find will be a bonus.

How … many drivers could score their first Cup wins this year?

Theoretically, it could be anybody without a win, but realistically? Look for three or four drivers with a shot to join Austin Cindric in the first-timers’ club. Tyler Reddick dominated at Fontana before a tire issue ended his quest for victory lane. A week later, he had a quietly respectable day at Vegas, finishing seventh after starting at the back and going for a wild spin through the infield grass.

Ross Chastain looked like he might take the Vegas win, scoring Trackhouse Racing Team’s first-ever stage win in stage two and leading a race-high 83 laps before working over William Byron and Kyle Busch to finish a very strong third.

See also
Up to Speed: What is Trackhouse Racing Team’s Ceiling in 2022?

Luck hasn’t been on his side, crashing at Vegas, but Chase Briscoe has shown steady improvement over his first year in the seat and is doing a lot of things right. Finally, Daniel Suarez has had some moments where he has shone for Trackhouse. If that shine comes at the right time, he could be a winner, too.

Looks like NA$CAR has finally figured a way to get a “Competition Caution” into the event for the networks.

NA$CAR believes that there were 12 cautions for 60 laps but they don’t count the lap that the flag comes out on so there were 72 laps at 45 mph which are 2 minutes each. That’s a lot of time for commercials. They really seem to drag out the caution periods for the networks.

Yeah that competition caution irks me to no end. Make the practices long enough that teams can get a handle on tire wear and get rid of that damned competition caution. A big middle finger to whatever NASCAR official is responsible for making that decision.

Agreed. If there has been rain and the track is still green, with little to no practice time, I can understand having a competition caution. Otherwise, it just a reason to bunch the cars back up. It’s ridiculous.

but didn’t they have practice and qualifying? they why have competition caution. i think i recall someone saying about different tire compound from either the truck or xfinity series. seemed like everytime i looked up it was commercial break.

They had a short 30 minute practice. Not really enough to get a feel for a long run given they need to dial the car in for the race. So the bigger question is, why can’t they make it 60+ minutes?
I think the answer is obvious, they WANT that extra caution. It gives the network another guaranteed commercial break. And they don’t care how obvious it is to all of us because they don’t care what we think.

On the positive side, The BIG 3 are now established!! Will Larson duplicate his Championship run of 2021? Is it Bowman’s turn to take the reins and be Big Man on Campus at Hendrick? Will Cindric have a “Cinderella Story” Championship run to stun the sporting world? Does anyone have what it takes to dethrone THE BIG 3 of Larson, Cindric, and Bowman? Stay tuned for more next week!!

Alex Bowman is the perfect replacement for JJ in the #48 car. Quiet, methodical behind the wheel, and barring a wreck or mechanical failure, almost a guaranteed top ten on the ovals. Funny… I never cared for Johnson (actually, I never liked Chad Knaus), but I find myself pulling for Bowman. Go figure. In any event, both Bowman and William Byron are doing a fine job of proving that HMS is not just a two-horse team.

i like bowman and byron cause the tend to fly under the radar hype wise. the other two can slug it out in the media.

When will nascar redesign the new wheel and tire so innerliners can be used again? Tires are causing too many cautions that last too long.

The other race interruption that I’ve not understood is at the end of stages. Just when everyone is elbows up to collect points, then they stop the race for about ten minutes. Back in the day, there was a bonus for the mid-race leader, but everyone kept racing rather than have a scheduled pit stop.

I’m pretty sure they initially thought about solving the flat tire / long caution issue, but then realized how much more ad revenue was to be had from the longer caution periods. By the time they get to Road America in July, we’re just going to have 2 laps of green flag racing, then 3 hours 15 minutes of commercials while the cars are putting around under caution, then a “green/white/checker” finish.