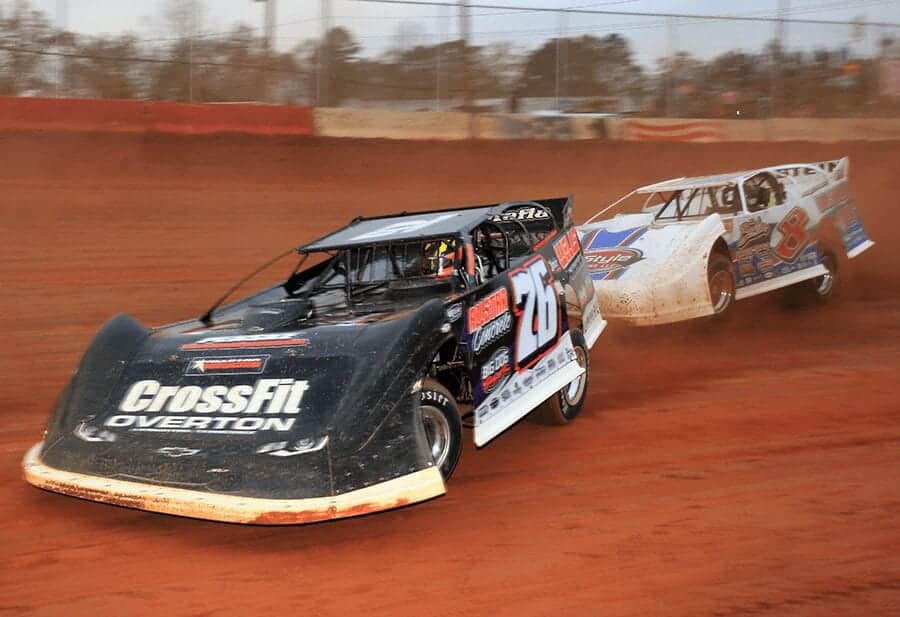 A flat tire late in Sunday’s March Madness race at Cherokee cost him a sweep of podiums on the weekend, but there’s no doubting that Brandon Overton remains at the top of the super late model pecking order after this weekend. Wins at Swainsboro Friday and Smoky Mountain Saturday netted Overton a cool $22,053 and give him a total of five race wins one week into the month of March.

There’s no argument to be made that Overton is racking up gaudy stats and money by cherry-picking. Yes, he was cream of the crop at Swainsboro on Friday and anything short of a win that night would have been a major upset. That could not be said about a loaded field of cars that opted to run Smoky Mountain on Saturday night.

If anything, the takeaway I noted from Swainsboro on Friday night was how noticeable it was that a host of big-name drivers didn’t make the trip, despite Swainsboro being a manageable six-hour tow from Smoky Mountain. The payout at Smoky Mountain was higher up top, but through the field was nearly identical, and while diesel fuel is certainly getting more expensive at this level of super late model racing, racers race for a living.

Give Overton and Wells Motorsports credit not just for winning, but for putting in the work to be in position to rack up said wins.

2. Cherokee Speedway needs to be fixed

Let’s go back to Cherokee Speedway. Remember how the Rebel 50 saw the Yankee modifieds actually prove able to race before a rash of late-race flat tires dulled the feature? Apparently that track prep didn’t take.

Sunday’s March Madness was for the second year in a row a parade up front, with Chris Ferguson leading the first 47 laps from the pole before blowing a tire, handing the win to World of Outlaws late model points leader Chris Madden. The top three all ran within a car length or two of each other for most of the feature, yet there was also no hint of a pass under green actually happening for the entire 50 laps.

I’m not rooting against Cherokee Speedway, as the track has no shortage of history and continues to host big-dollar races that are good for the sport. But I have to wonder how long they can keep packing the stands for races that objectively do not deliver the goods. What’s more, Cherokee Speedway hosting big-league races makes it one of the most visible dirt tracks anywhere in America, with the lion’s share of its events streamed nationwide.

Everytime I see a race at Cherokee. I wanna drive down there just to burn the place down. It’s the only option.

It does not do the sport any favors to have a marquee track with so many marquee events proving all but impossible to pass on.

Put new clay down. Add banking. Remove banking. Do something. Dirt racing needs Cherokee Speedway to be better, by any means necessary.

3. Cut feature distances down after rash of issues

Look, tire management is absolutely an art, a necessary part of the sport and an equalizer among all competitors. But from a fan’s perspective, there’s no enjoyment to be gained from watching a race where drivers have to conserve tires for 50 laps if the last 10 laps of a race is going to turn into yellow fever, caution after caution with flat tires while the leaders that don’t blow tires are running single-file at half throttle, making laps rather than racing.

I’m not usually one for restricting tire rules, but either mandate harder tire compounds or cut the race distances down. No one in the stands is going to complain about a 40-lap, $10,000-to-win feature.

It was certainly not surprising, but very concerning, that Kasey Kahne is nearly a month removed from his vicious crash to end the DIRTcar Nationals at Volusia and still apparently suffering from maladies relating to it, maladies that forced him to sit out both World of Outlaws features at Cotton Bowl Speedway this past weekend.

It’s more concerning that this is the second time in two years that this has happened to a World of Outlaws regular. Last spring, series rookie Brock Zearfoss was forced to sideline himself in late May after suffering lingering symptoms from a crash over two months prior, missing two weeks of the campaign in recovery.

A scan of the World of Outlaws rulebook does not reveal anything specific about the series’ concussion protocol, though it does provide insight into the accommodations in terms of points and purse money made to race teams that have drivers in their full-time ranks that are unable to compete due to medical issues.

And though I am no medical expert, I am fully aware of just how hard head injuries like concussions can be to diagnose. I’m not advocating for an at-track protocol, as I’m unqualified to know whether that’s even a viable solution.

The larger concern I have with all of this is the mentality of sprint car drivers and needing to make sure they’re asking for help when needed. Because all I could think of when I read the news about Kahne was Justin Grant’s tweet from the Chili Bowl earlier this year.

Then come back, get in the spare
car and finish the night.

Then head down the road, race
again tomorrow and the whole next
week.

Pounding head, probably a blurry eye,
and plenty bruised but you need to
make money.

Zearfoss a year ago said he felt like he was letting the World of Outlaws down by sitting out. If there’s been any lesson we collectively should have learned over the last two years, it’s don’t take your health for granted. There will always be more races.

I missed the heat races of Saturday’s Tennessee Tipoff at Smoky Mountain because I had no idea that the race was actually being streamed. But low and behold, a 25th hour announcement that the track, using the homegrown crew that is now handling pay-per-view at 411 Motor Speedway, would stream the Tipoff meant I got to see the super late model B-main as well as the evening’s feature races.

Again, just as with the Icebreaker at Lincoln last weekend, that the race was readily available to stream proved to have no impact on attendance, because the Tennessee oval was packed in both the stands and hillside parking; there were fans visible that had parked their cars on the entry road to the parking lot to get a view of the action.

At $30 a ticket, times the 400 or so viewers that were logged into the stream come feature time, that’s got to be a decent chunk of change for the facility. And speaking as someone that thanks to a lower-back injury cannot travel long distances at this point (I had plans to go to Cherokee Saturday that were derailed 20 miles into the drive by said back pain), this was a welcome weekend shot in the arm.

I implore all tracks out there to think long-term here. Responsible or not, the COVID era in dirt racing has made it clear that temporary impediments to attending races means fans will come back in droves as soon as they can. Gas prices shouldn’t be treated any differently. Streaming races with a quality on-track product will keep fans that can afford it coming, and bring those who can’t back as soon as they can.

I slammed Cherokee Speedway pretty hard in this piece, so let’s end with giving them some love. This video taken in the pits at the track during the March Madness weekend is as feel-good as they come. And don’t for one second think it’s just local racers either … this line of cars included defending Lucas Oil Late Model Series champion Tim McCreadie and defending Knoxville Late Model Nationals champion Mike Marlar.

These boys crack me up!! Got to fist bump all the drivers in staging lane

The next time anyone on FOX or with NASCAR touts Daytona and its aquarium windows with autograph slots as “driver accessibility,” enjoy a hearty guffaw and think of this video.

Cherokee has been an issue for years now, esp in the colder weather. I’ve seen numerous big money shows or shows w/ high horsepower machines racing, and it turns black and a 1 lane track. Gets boring real quick. If they cant get that outside to work, the race will be a follow the leader. I like Cherokee Speedway just like you, but the issue with no top groove is a mystery to me. It seems like in the hotter months, it works however. I stopped going to Cherokee in the Oct-Mar season as I was not seeing good racing there. I find it off that track is getting ALL the big money big series races. I suppose due to its proximity off 85? Carolina Speedway has vastly improved its surface over the years. Lancaster is a big fast half mile, never surface issues, but the track had been run poorly at times.