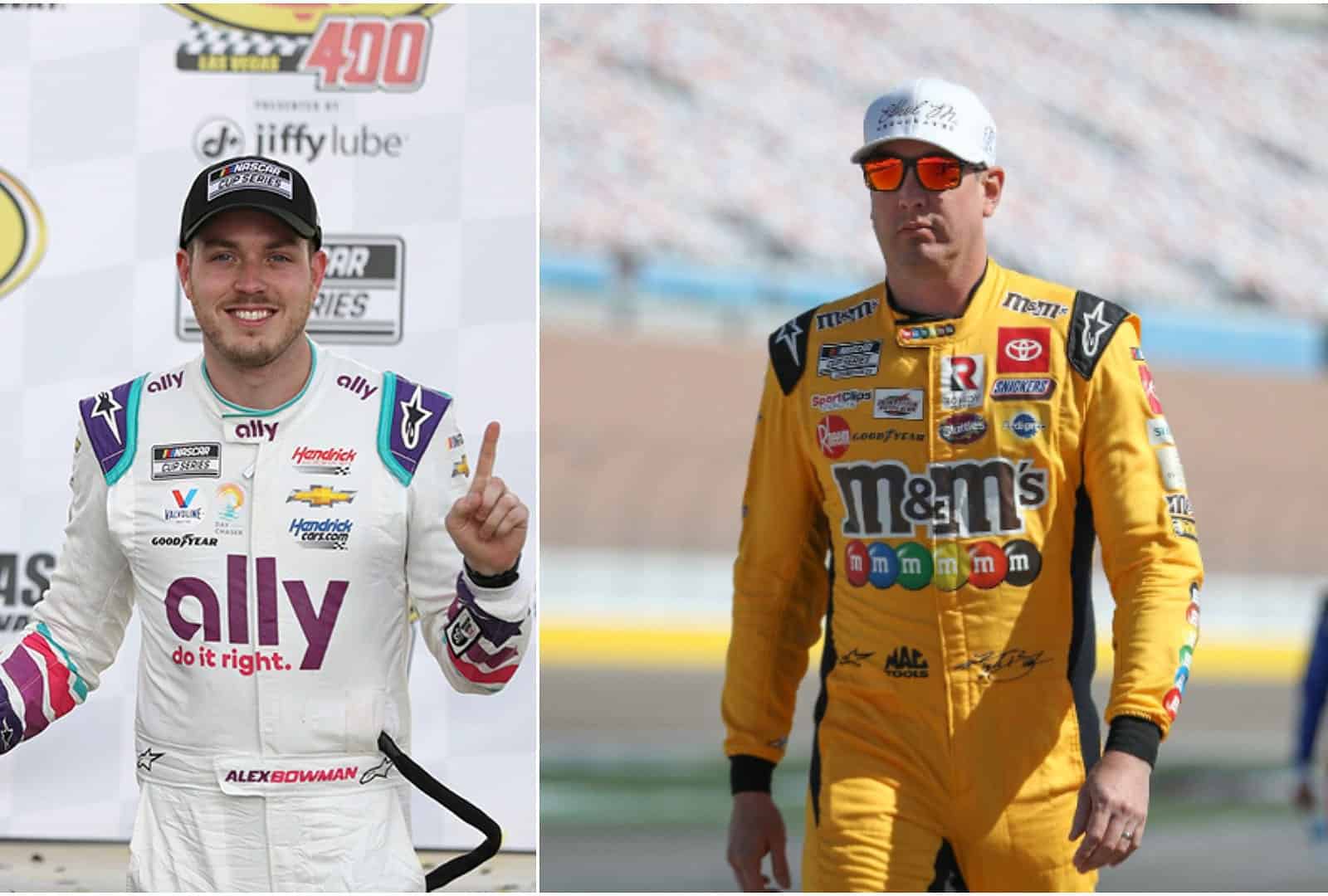 We live in a weird world.

No more than five years ago, Alex Bowman‘s racing claim to fame in NASCAR was this: climbing from a Tommy Baldwin Racing car at New Hampshire in 2015 as its right-side tire caught fire and sent the car up in flames.

Aside from two Xfinity Series top fives with Robby Benton in 2013, the Arizona native with a dirt racing background was a non-factor driving backmarker cars at stock car racing’s top levels.

In 2015, Bowman even famously said in an interview he was resigned to the fact he would never get a call from Hendrick Motorsports to race for the team.

All of this makes our current situation, three races into the 2022 NASCAR season, remarkably hilarious.

Take it away, Kyle Busch.

Imagine if I’d told you seven years ago that the driver of Tommy Baldwin Racing’s No. 7 car would one day:

Oh, and let’s not forget the shirts.

Bowman owns the field when it comes to merchandise capitalizing on one-sided driver feuds — or as one Reddit user referred to them, “Troll Tees.” Though Busch has been known to produce shirts based on his own misadventures (maybe this is all just a really intricate game of shirt design one-upmanship on Bowman and Busch’s part). And now Busch’s website is selling shirts 48% off, because why not?

Family sport friendly… 18% of the proceeds backing into an animal shelter near you https://t.co/YTNdSOowYQ

It’s icing on the cake for the Alex Bowman-themed fever dream we’re all living through.

Whether it’s a shirt inspired by being called a “Hack” by Denny Hamlin at Martinsville or a back-door winner by Busch, Bowman doesn’t seem to let any of it phase him. Why should he when he’s the one winning and they’re not?

Busch has only four wins dating back to the 2019 season finale at Homestead. Hamlin has three wins since October 2020.

Including Sunday’s race, in three of Bowman’s seven Cup wins Larson was the second-place finisher. In a fourth, at Pocono last year, Larson was leading on the final lap when he cut a tire and hit the turn 3 wall, opening the door for Bowman.

In all, no one not named Hamlin, Kyle Busch or Larson has ever finished second to Bowman or not been involved in some fashion in the outcome.

2nd-place driver to @Alex_Bowman in his 7 #NASCAR Cup wins:

Bowman may have “backed” into some of his wins, but that’s only because he had raced his way into a position to capitalize on other’s misfortune or bad strategy.

2022 is Daniel McFadin’s ninth year covering NASCAR, with six years spent at NBC Sports. This is his second year writing columns for Frontstretch. His columns won third place in the National Motorsports Press Association awards for 2021. His work can also be found at SpeedSport.com.

What a dicky think for Kyle to do. Bowman isn’t the first to win a race because of a late caution and being in the right place at the right time and he won’t be the last.

I wonder why Baby Busch has forgotten how many events he has won that same way? I guess he feels he deserved those gifts.

The series is really going to miss Kyle’s commentary when the precious Ty comes to take his ride. The “hack” managed to blow you away on 2 tires with you starting on his rear bumper, while holding off another hack that has been winning a few races of late. You have to be running up front to get those opportunities, not running 15-20th. If not, Jr. would have “backed” into a few during his dry spell, not to mention Jimmie in his final couple years.

That is not a nice thing to say even for a a privileged pampered member of Sir Gibbs Toyota factory team and who has never driven anything that was not a top level race machine in his Cup career. Just saying! he should be relegated to driving an underfunded back marker car and see if he makes the playoffs.

Just when I was thinking that KB had finally matured & was putting the “Busch Brat” image behind him. He shows that it was just really a PR thing. Maybe this show of his real self wasn’t all about what happened on track.
Could it be that the loss of his long time sponsor, & the fact that Gibbs is known for kicking very good drivers to the curb, and the fact that he’s going to need an open seat soon have entered into this?

His brother Kurt has actually matured into a decent person, as far as I can tell from the TV. Granted, it took a punch in the face (FREE JIMMY!) and an evil woman trying to ruin him, but he finally got there.

“I’d rather be lucky than good.”

i wonder how they explain kyle’s outbursts to their son when he races and gets into an altercation. these guys with kids racing need to remember sportsmanship behavior.

Sportsmanship died in professional sports a long time ago.