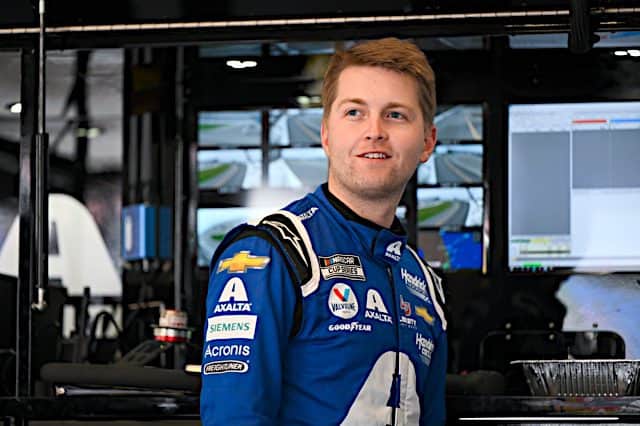 Did You Notice? … Alex Bowman’s sixth victory since 2020 with Hendrick Motorsports has William Byron a clear fourth in the pecking order at this powerhouse organization? With Chase Elliott and Kyle Larson on the team, the last two NASCAR Cup Series champions, it’s left the fifth-year driver a half-step further behind.

A sluggish start to 2022 for Byron hasn’t helped. Despite leading laps in all three races this year, he’s crashed out twice in the No. 24 Chevrolet. That includes a tough break at Auto Club Speedway where Byron didn’t see then-leader Tyler Reddick slowing in front of him with a flat tire.

Heavy contact for Tyler Reddick and William Byron after a tire issue for the No. 8. https://t.co/4q2YOBTRE9 pic.twitter.com/j9kkAO0yfp

The incident isn’t the first time these two have tangled, with Reddick making contact with Byron last October as he was racing for the win at the Charlotte Motor Speedway ROVAL. The duo then rubbed fenders again at Texas Motor Speedway the next week, although Byron recovered to finish second.

He was out of the postseason by then, marking the third straight year he’s failed to make it past the Round of 12. It’s all part of a pattern where he’s just a tick behind his HMS brethren in almost every major category the past three seasons.

NOTE: Kyle Larson missed 32 races in 2020 after being fired by Chip Ganassi Racing (those four starts are included in these totals)

As you can see, Byron’s numbers aren’t that far off Bowman except when it comes to the win total. In fact, Byron has more stage points during the past two-plus seasons, outpointing Bowman 460-407.

But it’s in the final stage where Bowman is at his best. Frontstretch’s Daniel McFadin documented how the No. 48 team is challenging Kevin Harvick for the closer’s role, leading 16 laps or less in his last three wins while outgunning drivers like Larson, Denny Hamlin and Kyle Busch. Even if there’s a mixture of some luck involved (like Larson hitting the wall on the final lap at Pocono Raceway), Bowman has learned to capitalize on track position when it counts.

Byron still has work to do. Despite ranking first in speed on the first two green-flag laps after a restart, outgunning champions like Busch, Elliott and Larson, he ranked 64th (!) in NASCAR’s Closer statistic last season for positions gained or lost in the last 10% of the race.

He’s also struggled to dominate an event in the way Larson, Elliott or Bowman have in the past few seasons. Byron has led over 100 laps in a race just once in his career, at Homestead-Miami Speedway (where he won last March) and has led over 50 laps just three times. And despite being a strong qualifier, he has just one top-five finish in races where he’s started on the front row (1-for-17).

The good news for Byron is he has time on his side. Just 24 years old, one of his primary sponsors (Liberty University) has already committed through 2026, a lifetime in this modern racing economy. Owner Rick Hendrick has given him a vote of confidence and made clear he wants Byron on his team for the long haul. We’ve seen HMS stick with drivers for years that underperformed in the win column: Ken Schrader in the 1990s, Dale Earnhardt Jr. in the late 2000s and early 2010s and most recently Kasey Kahne.

Some drivers would kill for the stat line Byron’s put out. The problem here is one of expectations. Byron was hailed as the next Jeff Gordon, taking over the No. 24 around the same age Gordon did (20 vs. 21). But Gordon was cruising by his third season, winning a championship over fellow NASCAR Hall of Famer Dale Earnhardt and scoring double-digit wins a year after that.

Byron hasn’t come close to matching that in year five. In fact, his stat line trails a three-year stretch of someone else who ran top-tier equipment: Erik Jones. Jones had a similar stat line in the No. 20 for Joe Gibbs Racing over a three-year stretch from 2018-20, totaling up two wins, 28 top-five finishes and 48 top 10s.

That wasn’t enough at JGR, ousting Jones in favor of Christopher Bell. If Byron follows a similar trajectory in 2022, he’ll be lucky HMS thinks that’s good enough for them.

Did You Notice? … The number of new, open teams testing out the Cup Series is piling up? It sure doesn’t seem that way during the west coast swing; we’ve had just one open team, NY Racing’s No. 44 (Greg Biffle), attempt a race during this three-week stretch after six showed up for the Daytona 500.

That’s about to change. Team Stange (No. 79) is just the latest to announce their arrival on the Cup tour, announcing an eight-race schedule with Brazilian Tarso Marques. A former open-wheel driver in Formula One and Champ Car, Marques will get the team’s feet wet as they plan a long-term future in the sport, similar to what Jacques Villeneuve is doing for the No. 27 of Hezemans Racing.

That ups the number of new open teams on the Cup circuit to three (add the No. 50 of boxer Floyd Mayweather’s The Money Team Racing). All of them are taking a smart approach, not overloading their schedule early on when supply chain issues have left even the top teams with an equipment shortage. For the most part, they’re focusing on road courses and superspeedways where the teams can be competitive instead of running 30th on an intermediate.

Add in MBM Motorsports (No. 66), Beard Motorsports on the plate races (No. 62) and it’s clear these open spots will be filled soon enough. With a number of current teams looking to expand heading into 2023, the charter market is primed to become more competitive at a time NASCAR is looking to woo another manufacturer back into the fold. That’s good for the sport.

Your points on Willy B are valid. But I think it’s also reasonable to point out that late race strategy errors by the crew chief (Pocono 2021) as well as continually losing spots on pit road have cost the 24 chances at wins. The 24 pit crew has consistently lagged behind the performance of the other HMS crews. The 88 crew has played a major role in the wins for Bowman as has the 5 crew for Larson. When you couple in late race bad luck like at the Roval its not a stretch to say the 24 could have had 3-4 wins in 2021. If strategy and pit road performance improve the 24 should win multiple races in 2022 and be a final 4 contender.

The 24 hasn’t been the same since Evernham left.

There may not be an 88 team, but there is still an 88 crew, and they are currently working for the 48.

There are several drivers that I’m looking forward to their retirements. Aric A, isn’t one of them.
Anyone who could win for Petty when he did, has something going for them.
He’s just with a spotty team now. I wish him well, & he’s not retiring from racing. Just the all consuming grind of Cup.
Who knows, after the way he ran on the dirt, maybe I’ll get to see him at the Chili Bowl, Larson or Bowman might have a car available.

Byron’s “luck” hasn’t been very good lately. When his “luck” improves so will his finishes.