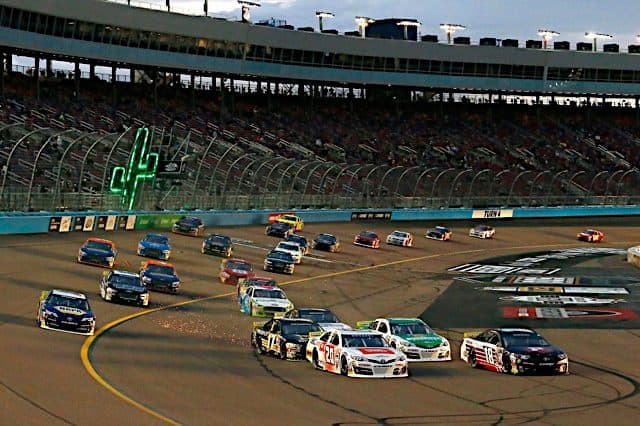 The second race of this season has surpassed that number as 40 drivers are entered for the General Tire 150 at Phoenix Raceway. It is the most drivers entered in a race since the 2017 season opener and it is the maximum field size.

At Daytona this year, though, Venturini Motorsports drivers dominated the race, leading all but six laps and all finishing in the top 10 with Corey Heim winning it.

While Phoenix is a 1-mile track, Toyota drivers have dominated in ARCA competition there as well. Ty Gibbs won both ARCA-sanctioned races there last year, and Venturini driver Chandler Smith won the only other main ARCA race there in 2020.

David Gilliland won the 2020 ARCA Menards Series West season finale there driving his own No. 4 Ford. As for Chevrolet, Cole Custer wheeled one to win the 2014 West season opener at Phoenix. Overall, Toyota has dominated ARCA events in Phoenix.

Sammy Smith will make his first main ARCA start this year driving the No. 18 Kyle Busch Motorsports Toyota. Smith won the ARCA Menards Series East season opener this year, and he has logged laps at Phoenix. In the West season finale there last year, he started second and finished third. Now, Smith pilots the No. 18, the same car which won both ARCA-sanctioned races at Phoenix last year.

The Venturini trio of Toni Breidinger, Parker Chase and Jesse Love will be contenders as well.

Breidinger has competed three times in ARCA events at Phoenix, though she has yet to score a top 10. She matched her career-best finish of ninth place in the season opener at Daytona, so she is eager to best that mark in this race.

Chase finished 13th at Phoenix in the 2021 ARCA West race at Phoenix. He scored his career-best finish at Daytona with a runner-up finish, and his good fortunes continued. The Texan announced he will make his NASCAR Xfinity Series debut this year at Circuit of the Americas.

The last time Love raced at Phoenix, he won the 2021 West championship via a tiebreaker. He has four career starts at this 1-mile track with a best overall finish of sixth place.

“It’s an important race,” Love told motorsports reporter Casey Campbell. “You put a lot of effort into it cause you want to do well to start the year off. Phoenix is a place that I have a lot of laps at, I feel comfortable at, I know what to do …

“I definitely feel like I’ve progressed a lot throughout the offseason,” Love continued. “Phoenix is a place we want to win at to start the year off right. It’s going to be a big field again which is always great. The competition is stiff, it’s harder, and we like it so I’m looking forward to seeing how we stack up.”

The Rev Racing Chevrolet duo of Rajah Caruth and Nick Sanchez both hope to have race-winning cars too. Caruth will make his second start at Phoenix. He competed there last year, finishing eighth in that ARCA West race. This time, Caruth is driving the No. 61 instead of his usual No. 6 because one ARCA West driver, Jake Drew, is driving the No. 6.

Sanchez is running double-duty this race weekend. In addition to competing in the ARCA race, he’ll make his Xfinity debut driving the No. 5 BJ McLeod Motorsports Chevrolet.

In that 2021 West finale at Phoenix, Daniel Dye started fifth but finished 12th. After finishing third at Daytona this season, Dye is eager to continue his success.

“Phoenix Raceway is a really fun place to race at, and I’m anxious to finally get back to a track that I’ve been to already with one of our GMS ARCA cars,” Dye said in a team release. “We ran well last fall and had really good speed with our Chevrolet. Unfortunately, a few things happened on track that forced us to pit and put us way behind, but we managed to learn a lot, and I feel like we’ll be in good shape to run up front on Friday night.”

The top Ford driver in this race is expected to be Taylor Gray. However, the David Gilliland Racing hauler was involved in an auto accident en route to Phoenix, with the hauler driver dying. As of press time, the team is assessing whether Gray will indeed compete in this race.

Wheeling his No. 35 Ford, Greg Van Alst will be making his first start at Phoenix. He told Frontstretch he will use the hour-long on-track session to both learn the track as well as earn a good starting position.

First, Van Alst will drive the car in race-ready mode. Depending on where he is on the leaderboard, he may opt to adjust the car to give it more short-run speed.

Van Alst is confident in his No. 35 Ford. It is the same car he drove to a second-place finish at Winchester Speedway and a sixth-place finish at Michigan International Speedway.

With his short track racing background, Van Alst knows he has a car capable of running up front. As for how he will race this large field, with many drivers whom he has never competed against, Van Alst said he will race them with the same respect he gives all the other competitors.

There will be an hour-long combined practice and qualifying session for these ARCA drivers. Then, the General Tire 150 will take place that same Friday (March 11) at 7:30 p.m. ET with TV coverage provided by MAVTV and available on FloRacing.

Well, now I can go back to watching the ARCA races and enjoying them. Why? Because Old Joe has decided to move little Ty Gibbs up to the Xfinity Series, thus allowing some competition in the ARCA Series once again.

Of course, the downside to that is that I won’t be watching the Xfinity races anymore. Why? Old Joe is spending exorbitant amounts of money to make sure little Ty wins, along with some “creative engineering” that’s obviously being done to those cars. Eighteen and nineteen year-old kids just don’t come into the Xfinity Series and start winning right off the bat unless something “funny” (not ha ha funny either) is going on.

And that is why little Ty will be the ONLY winner from Old Joe Racing in the Xfinity Series. The other Old Joe teams will only wish. We know this is exactly why Daniel Hemric and Harrison Burton left after last season. They saw the handwriting on the wall.

Unfortunately, it will be the same way for the other Old Joe teams in the Cup Series when little Ty moves there.

Pay attention, Kyle Busch, Denny Hamlin and Martin Truex. Get all the wins you can before little Ty moves up to the Cup Series. Because Old Joe will make sure little Ty gets all the wins then. No matter what he has to do!