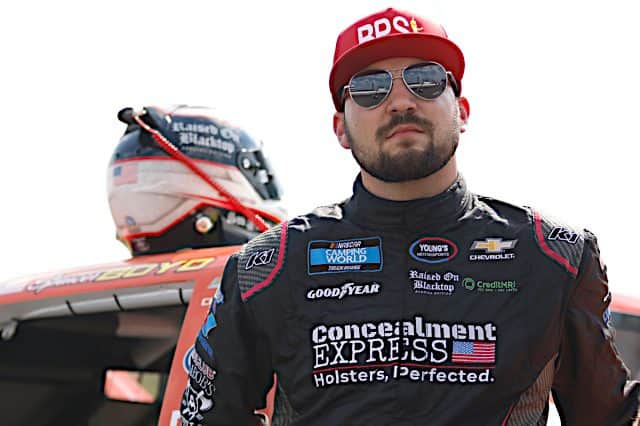 For the second time this season, NASCAR is facing questions about its late-race caution calls in the NASCAR Camping World Truck Series.

The first came in the season opener at Daytona International Speedway when an official with lightning-quick reflexes triggered the caution almost immediately as the Big One occurred. It was a call that made the difference of mere feet between sending the race to overtime and ending it under caution with the yellow flying on the white flag lap.

In that instance, the race did go to overtime, only to have the caution wave on the white-flag lap, ending the race under yellow when Kris Wright and Jason White crashed. Of course, the yellow triggered a spirited debate about what constitutes a white-flag caution, but NASCAR’s ultimate call came because a driver hit the wall nose-first and felt it necessary to get safety officials to on scene immediately.

Fast forward two weeks and the call was completely different. After the field restarted from the final yellow at Las Vegas Motor Speedway, Spencer Boyd crashed and his truck came to rest on the inside wall where it sat until after the checkered flag flew.

The onboard camera from Todd Bodine’s truck captured Boyd’s truck just sitting against the inside wall while the field raced – and crashed – past it.

When Boyd finally emerged from his damaged truck, he favored his right arm, and there was some concern that he might have broken it. The good news is that it just turned out to be a dislocated shoulder and Boyd was in good spirits despite the whole thing.

Spencer Boyd says he dislocated his shoulder and will go get x-rays following his last-lap wreck at Las Vegas. Says he should be good for Atlanta. pic.twitter.com/6yxTHM0RSC

But why didn’t NASCAR throw the yellow, instead opting to leave Boyd’s disable truck sitting in a dangerous position?

Sure, he was well out of the racing groove, but if it’s one thing this sport has proven before, it’s that if it can be hit by a crashing driver, it will. That unfortunate situation has led to numerous changes in wall configurations throughout the years.

Consider for a moment, if you will, what could have happened had someone had a wreck similar to the one that saw Christian Eckes careening out of control on the apron and into the inside SAFER barrier.

Had something like that happened while Boyd sat there stopped against the wall, the result likely would have been much worse. Thankfully, it didn’t happen, but that’s the type of scenario NASCAR needs to consider and expect.

Earlier this week, Elton Sawyer, NASCAR vice president of officiating and technical inspection told SiriusXM NASCAR Radio’s The Morning Drive “we have to own that as the sanctioning body.

“We had meetings post-event to look at our process and procedure and what we need to do to be better. We have more meetings (Tuesday) to put more process in place to make sure that never, ever happens again.”

Sawyer even went so far as to call it a “perfect storm” with the incident occurring alongside the final laps of the race, while still admitting that was “zero excuse.”

It’s easy to admit a problem after the fact and to “own it” as Sawyer said. Hindsight is always 20/20. But what would the sanctioning body have said to Boyd’s family and friends had he been hit while sitting there in his wrecked truck and gotten seriously injured or worse?

Obviously, racing is inherently dangerous and it’s a risk these drivers take when they strap into the seat every week. It becomes a problem when it’s clearly something that’s preventable with better decision making.

A frightening and violent crash for Johnny Sauter in Charlotte. He climbed out and is okay. pic.twitter.com/g0C7XuB5AR

In this situation, again, thankfully both drivers were alright, but it’s absolutely unacceptable for the sanctioning body to make such a mistake. As of right now, at least on the surface, it appears NASCAR is being way too reactive and not proactive enough in making its policies clear.

There should never be a driver sitting in their car and unable to pull away while the field races full speed past them. Period. After all, there’s a reason the sport opted to move away from racing back to the start/finish line when the yellow flag flies and instead freezes the field at the moment of the caution.

It’s been a long time since the sport has dealt with a tragedy. Is that what it’s going to take for NASCAR to have a more unilateral policy in what necessitates a caution, even if it’s one that ends the race under yellow?

In the modern age of electronic scoring where every vehicle has a transponder installed, there is zero excuse for these incidents. I’m quite shocked the control tower doesn’t already have an alert system set up in the programming that indicates when a vehicle is below a certain speed. If the on-screen graphics package can have all these little dots indicating where cars/trucks are on the track, NASCAR must have something similar. Right??