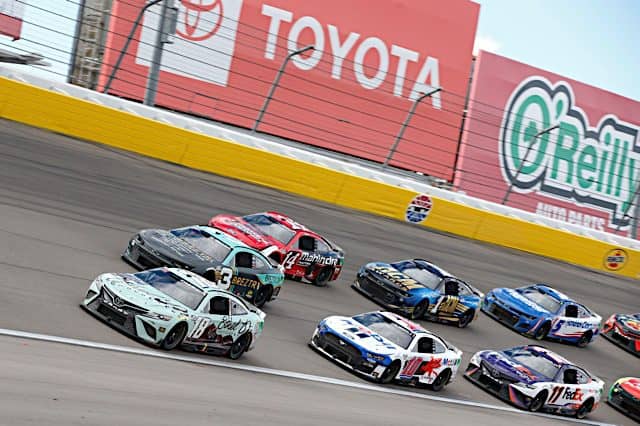 SRX has given us battle of the Elliotts and now the Blaneys. What are some other family related matchups you’d like to see happen? – Josh B., Owensboro, Ken.

SRX’s idea of pinning fan favorites Bill and Chase Elliott together and simultaneously against each other last year at Nashville Fairgrounds Speedway was brilliant. It was a feel-good story and one that allowed longtime fans to harken back to days of yesteryear, while also allowing the current fanbase to revel in their guy beating out his old man.

Fans will get that chance again this year, when the Buckeye Bullet, Dave Blaney, races against his son and rising star Ryan at their home track of Sharon Speedway. It’s another great idea pulled off by SRX entering its second year, and it got me thinking who else I’d like to see race against each other from the same family.

Bobby Labonte competed last season. Why not have his brother and fellow NASCAR Cup Series champion Terry join him for a race or two? Another pair of fan favorites, Hall of Famers and drivers who still have it. Heck, Bobby still races regularly in his modified nowadays. It wouldn’t necessarily be the splashiest brother combo or make the most noise, but Bobby and Terry are two that would be a great addition to SRX.

As would Jeff and Harrison Burton. The latter and younger Burton, a current Sunoco Rookie of the Year contender, doesn’t have the pedigree (yet) to be called a superstar, so putting him in the Superstar Racing Experience may be a bit of an oxymoron.

But his father, current Drivers Advisory Council director and NASCAR on NBC analyst, is. And pairing that father-son duo together would be another terrific way to tie the past into the present and future.

In a similar vein would be Todd and David Gilliland. The latter of the two having not won a Cup race makes this a bit of a tougher sell, but they would nonetheless be another option to consider should SRX want to relate things to the current up-and-coming stars in the sport.

Marco Andretti, like Bobby Labonte, already has dipped his toe into SRX. Could you imagine if Mario were to suit up one more time and bang quarter panels with his grandson? If Mario can still do ride-alongs in NTT IndyCar Series two-seaters, I think he could suit up and legitimately contend in a SRX race.

Not to mention the combinations of Rusty, Mike, Kenny and/or Steve Wallace, Michael and Darrell Waltrip or even Corey/Randy LaJoie.

Family ties run deep in NASCAR and motorsports in general. SRX has hit on something great with the familial pairings at its respective home tracks. If it’s something it wants to continue for years to come (I see no reason why it shouldn’t), it won’t have a small bucket of drivers to pick from.

Will the Next Gen car improve racing at tracks that have been boring as of late? – Diego M., Roseville, Calif.

If the first three points-paying races are any indication, it sure looks like it.

Not that Daytona International Speedway, Auto Club Speedway or Las Vegas Motor Speedway necessarily needed to be improved drastically, but those races were pretty damn good.

Not that this should be used as the end all be all or No. 1 barometer, but Jeff Gluck’s “Was It a Good Race?” poll did record numbers in terms of votes cast in recent weeks, and the last two races were over 90% for the first time ever.

It’s obvious that the reason for the good racing we’re seeing is due to the change in race car and aerodynamic package. More horsepower, less downforce and a new car designed to promote side-by-side racing have all contributed to a better on-track product.

So what does that mean for tracks like Richmond Raceway, Texas Motor Speedway and Dover Motor Speedway? Time will tell, but this Next Gen car seems ultra promising.

Richmond hasn’t lived up to its nickname of The Action Track in recent years, with 400-lap races that have rarely seen caution flags and action — so much so that one of the track’s dates was moved out of the postseason because it wasn’t deserving of being on the 10-race slate.

I’d rather do a lot of things than watch 500-mile races at Texas. But given how well this car has performed thus far (and on one circuit somewhat reminiscent to Texas in Vegas), the worst track on the NASCAR schedule could realistically be improved dramatically. And with the All-Star Race there as well, assuming supply chain issues will be fixed by then, drivers will likely not have any worry in throwing caution to the wind, potentially making for a better race.

And then there’s Dover. Ah, my beloved Monster Mile. My home track and a venue I attended growing up twice per year, every year, from 2002-2013. It holds a special place in my heart … but it’s not what it once was.

As Stephen A. Smith would say, though: HOWEVA, the same fate could occur at Dover as it may at Richmond and Texas. And if that does end up happening, boy, oh boy, will NASCAR have hit a home run with the Next Gen car.

Again: these are hypotheticals for a reason, and who knows if they’ll actually come to fruition. But after a month of racing this season, I feel hopeful and optimistic that this is the answer and it has changed racing for the better.

Face it. One of the reasons the races have been so entertaining is because of the cautions created when cars unexpectedly spin, giving us more yellow foags. Thus, mor restarts, keeping cars closer together throughout the majority of the race. Still not sure if this is much different that the Nascar ‘bunch ’em up’ cautions.

Expect the “improvement” if that means more yellow flags due to wrecks, to be temporary as teams & drivers better understand the new car.
On the other hand, let’s hope that the difference is more passing. That would be a real, & lasting improvement. But that’s maybe a two edged sword, with NASCAR trying to reach a new generation raised on “action” video games.
With drivers like Harvick, Busch, & Keselowski spinning out on their own, & sometimes taking out other cars, That’s definitely action.
I’m a little torn, because as much as I enjoy close clean racing. The long term viability of the sport is dependent on a new fan base.

I agree with the other commenters that the races are getting positive reviews because of the plethora of cautions bred by the instability of the new car. Once most of the teams figure out how to stabilize the car and random spins lessen, then the true test will begin.
My theory is that casual fans don’t like watching actual racing, they like watching the mayhem that a byproduct of racing.
Personally, if I am being honest, at tracks 1 mile or larger, I find races with less than 3 REAL cautions tedious and possibly sleep inducing. On the other hand, races with more than 6 REAL cautions become equally annoying as it feels like the race never happened, it was just a bunch of restarts resulting in an arbitrary finishing order. On short tracks I have no problem with 6+ cautions because it is almost expected that there will be contact and that’s what makes short tracks so much fun to watch.

I think part of the problem on the 1.5+ tracks has been the dreaded aero push. A car can be faster, but get within 2 or 3 car-lengths of the leader and all of a sudden front grip – and the ability to make any move to pass – are gone. It becomes a strung out parade of nobody being able to pass unless they are overtaking a significantly slower car. I missed the Vegas race, but that seemed to be less of an issue at California, so I still have hope.

On the short tracks, especially when watching live, there are times you need a caution to sit down, take a break, catch your breath and figure out just where everyone is in the running order.

Last edited 3 months ago by Jeremy
0
0

The only true indication for me is a car actually being able to catch the leader and pass him without help or a bumper.

And that is yet to be see. I see Ben Kennedy is being “promoted” back to where he was before. But I don’t see it mentioned what he’s been doing since he left that position.

“Steve O’Donnell has been promoted to chief operating officer, and Ben Kennedy has been named senior vice president of racing development and strategy. NASCAR announced the internal movement — effective immediately — Thursday in a news release.”

Ben was Senior VP of the strategy and innovation department. He was the “mastermind” behind the Clash experiment, which says it all. He should go back to driving the Frankenstein monster they’re trying to make raceable.