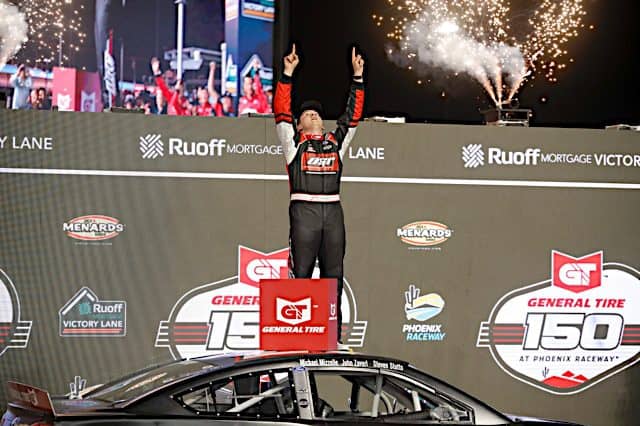 After 154 laps of racing, Taylor Gray took his first main ARCA Menards Series checkered flag at Phoenix Raceway in the General Tire 150 Friday night (March 11). It was an emotional win for the David Gilliland Racing team as it came three days after a highway crash on Tuesday morning near Longview, Tex.

The crash killed hauler driver Steven Stotts and left three others injured. After Gray took the checkered flag, members of the team embraced each other on the pit box.

“It [the win] means everything,” team owner David Gilliland said while holding back tears. “For Steven and his family, they’ve been in our hearts and prayers all week.”

“It felt like they [the late-race restarts] didn’t want me to win tonight,” Gray said. “All those guys, really tough to beat. We just had a really good racecar tonight. Chad Johnston, all the guys back at the shop, Jeremy West, Ed, Aaron, Nick on top of the stand, Frank, everyone involved with this program, wow. What a fast car.

“I don’t really know how to describe it [the moment]. This is just for Steven, I feel like he looked over me today and helped me get this win.”

Daniel Dye finished second after being passed by Gray for the lead on a restart with 12 laps to go. Combined with his third-place finish at Daytona International Speedway three weeks ago, Dye will be the new points leader heading into the next race at Talladega Superspeedway on Apr. 23. Polesitter Sammy Smith dominated the first half of the race and led the most laps, but he faded in the final third of the race and had to settle for third.

The green flag flew at approximately 5:45 p.m. MT, and Gray jumped out to an early lead over Smith. The beginning of the race was stop-and-go with cautions, as the first caution came out after just a few laps of racing for Chris Lowden‘s spin. The second caution came out almost immediately after the race resumed for Greg Van Alst‘s spin on lap 11, and on the ensuing restart, Smith got around Gray for the lead on lap 17.

After Smith took the lead, the race calmly progressed to the halftime break on lap 75. Smith and Gray were the two fastest cars on the track, as they had gapped Dye and Love, the third- and fourth-place cars, by more than five seconds. Lapped traffic brought Gray close to Smith on a few occasions, but Smith maintained the lead and headed into the halftime break looking like the dominant car.

After the halftime break, Dye made a three-wide pass on the ensuing restart to take the lead on lap 80. However, Smith quickly passed him back for the lead just two laps later. From there, Smith maintained a comfortable lead over Dye, who had settled into second in front of Gray.

A caution with just under 50 laps to go for Christian Rose‘s crash bunched the field up once again, and on the lap 107 restart, Dye left the field in the dust.

With under 20 laps to go, Dye had a four-second lead, which continued to grow while Smith and Gray battled each other for the second spot. Gray eventually passed Smith, but a DL Wilson spin on lap 132 erased Dye’s huge lead and gave the rest of the field a chance.

On the restart with 12 laps to go, Dye took the outside, but he was swallowed up by Gray and found himself fighting for his life against the rest of the pack behind him. Dye managed to retain second place, and he had another chance at the win after a second spin by Wilson set up a restart with four laps to go. On the ensuing restart, Gray pulled ahead once again, and Todd Souza spinning Tanner Reif set the field up for an overtime finish.

In overtime, Gray pulled ahead of the pack while Dye, Smith, Caruth, and Love headed into turn 1 four-wide behind him. Dye made an excellent save after contact to hold on to second, but he could not mount a charge on the final lap. And when the checkered flag waved, it was Gray who emerged victorious on a Friday night in Phoenix.

The ARCA competitors take more than a month off before their next race. They’ll next race at Talladega in the General 200 on Saturday, April 23 at 1 p.m. ET with TV coverage provided by FOX Sports 1.