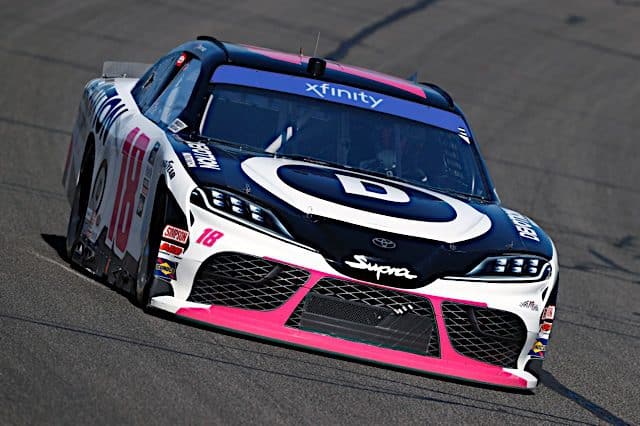 The NASCAR Xfinity Series set the grid for the United Rentals 200 Saturday morning (March 12) at Phoenix Raceway. Trevor Bayne set the pace early with a lap at 131.839 mph.   From there, Bayne’s lap was able to withstand some scary moments when teammates Ty Gibbs and Brandon Jones nearly knocked him off the top of the pylon. Then at the end of the session, he survived another charge from JR Motorsports star Noah Gragson. However, Bayne’s lap was able to hold up to win him the pole for the United Rentals 200.  It is his first NASCAR pole of any kind since the U.S. Cellular 250 at Iowa Speedway in 2014.

Bayne’s lap was a little less than six-hundreths of a second faster than Gragson.  Gibbs will start third, then Ryan Sieg and Brandon Jones.  Parker Retzlaff will make his Xfinity Series debut from the sixth position.  JR Motorsports’ Sam Mayer, who was fastest in the 20-minute practice session earlier, will start seventh, followed by teammate Josh Berry. Richard Childress Racing’s Sheldon Creed and Kyle Weatherman will round out the top 10.

There was one incident during the qualifying session.  NASCAR appeared to release David Starr from the pits too early to begin his warmup lap while Loris Hezemans was qualifying.  Exiting turn 2, Starr lost control of his TicketSmarter Ford and spun down the backstretch.  Given the current design of Phoenix Raceway, this ruined Hezemans’ qualifying lap and rendered him unable to wave off.

NASCAR allowed both drivers to re-qualify their cars after a cool-down period.  Starr was also allowed a new set of tires.  With new tires, Starr was able to qualify 29th, the first time that SS-Green Light Racing’s No. 08 will start a race this season.  Hezemans was unable to qualify fast enough to get into the field.

In addition to Hezemans, Brennan Poole, Jesse Little and Stan Mullis.  Poole did not turn a lap in qualifying or practice earlier in the morning.  Little was a last-minute replacement for Jesse Iwuji.