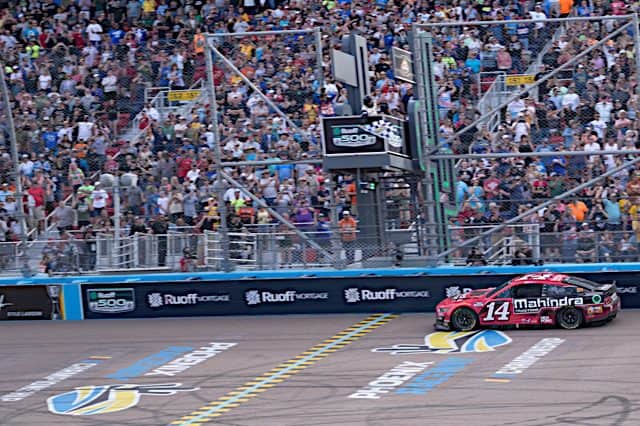 Chase Briscoe took home the checkered flag in the Ruoff Mortgage 500 at Phoenix Raceway Sunday (March 13) in his No. 14 Stewart-Haas Racing Ford Mustang. This was Briscoe’s first career win in the NASCAR Cup series, making him the 200th winner in the series’ history.

“It’s unbelievable. I was crying the whole last lap,” said Briscoe after the race, “I mean, this is definitely a team win, but I just thank everybody that’s gotten me to this point. Seven years ago I was sleeping on couches, volunteering at race shops, and was literally driving home to give up.”

Ross Chastain, Tyler Reddick, Ryan Blaney and Kurt Busch rounded out the top-five finishers when the dust had settled in the desert.

Blaney led the first 26 laps prior to the competition caution, but a speeding penalty forced him and several others to the rear during the caution pit stops.

Hear from Denny Hamlin and Ryan Blaney after their early speeding penalties at Phoenix. They were 1-2 at the time of caution. https://t.co/1QUg8eUY1k pic.twitter.com/dbLXEkytx7

William Byron took home the stage points and singular playoff point in stage one after a long green-flag run, which has been the common theme throughout the weekend. A pair of Chases rounded out the top three, with Briscoe and Chase Elliott coming in a close second and third, respectively, while Reddick and Alex Bowman rounded out the top five after the first 60 laps.

Blaney had a fast car all day long. A speeding penalty caused the Team Penske driver to miss out on any points in stage one. However, he refused to be denied in stage two as Blaney took home the stage and playoff points at the 185-lap mark, and stayed up at the front of the pack for the rest of the race.

Many had Kyle Larson picked to win this one; After all, he won at Phoenix last November and won the NASCAR Cup Series championship in the process, but a broken valve spring kept him from running it back.

A tough one for the 5️⃣. @KyleLarsonRacin is forced to the garage due to a mechanical problem. pic.twitter.com/pVujWmFQcF

Larson was asked about the issue following his exit.

“I don’t know, I felt it four or five laps before it (broke). It was just getting worse, but yeah, I hate that our Valvoline Chevy was pretty good,” said Larson. “I thought we were a fourth or fifth place car, just was hoping to be a little bit better than that.”

With so many heavy hitters seeing an early exit, the door was open for drivers like Briscoe and Reddick to capitalize and capitalize they did. With less than 50 laps to go, Briscoe cemented himself up front, battling with Elliott for the lead. Briscoe managed to hold off the 2020 Cup Series champion among several others who tried to make a run on him, and secured his spot in the NASCAR Playoffs.

There have been four different winners so far this Cup season, all under the age of 30.

Those heavy hitters exiting early helped bubba finish 22nd instead of 30th. Attrition. Kurt’s up to 11th in points. 4 winners under 30 so far, pressure is going to start for the playoffs if this continues.

Seems Kurt isn’t having any effect on Bubba. Who’s surprised?