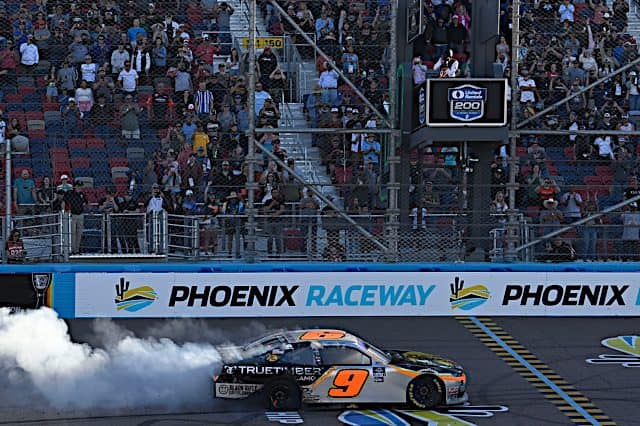 Noah Gragson has been hot all season in the No. 9 Chevrolet, and he continued that hot-streak on Saturday (March 12) as he took home the win in the United Rentals 200 at Phoenix Raceway. Brandon Jones, Josh Berry, Trevor Bayne and John Hunter Nemechek rounded out the rest of the top five after the dust had settled in the desert.

How he did it, though, was much different than we’ve seen so far this year. Where as the other three races we’ve sat through this season have been chock full of cautions, Gragson used a smart pit strategy and a good long-run setup to cruise to victory and capture his first win of the season. That wasn’t all that was eye-catching, though, so sit back, think about putting your foot to the floor, and let’s dive in.

Luke Lambert, Gragson’s crew chief, gets the first spot on our winners list this week for some pretty self-explanatory reasons. There were only two wreck-related cautions on Saturday, so the long-run strategy he and the rest of the crew employed was a huge key in their first victory of the season, and they should be rewarded as such. With 55 laps to go, everyone knew the window to stop was closing. The running order had Gragson at the front with Jones, Berry, Justin Allgaier, and Nemechek rounding out the top five, and Jones would take the lead off of pit road.

“[It’s] our first one of the year. We executed good, my crew chief Luke Lambert did a great job, and thank all you guys (the fans) for your support, so we’ll go to Atlanta next weekend and try to keep it going,” Gragson said postrace.

Lambert and the rest of the crew prepped Gragson’s Chevy for a long run to the finish, and that’s exactly what happened. The crew was understandably excited about their first win of the season, and in typical Gragson fashion, he burned ’em down in yet another fiery post-race celebration.

Our second winners spot is another safe pick – Junior Racing Motorsports, except for Sam Mayer that is, we’ll get to that later. The JRM boys not only brought home the win with Gragson, but also managed to add two more top-10 finishes to their season. With results like these, team boss Dale Earnhardt Jr. will have to fill some seats before long, but something tells me that’s just fine by them as long as they keep winning now.

Sam Mayer earns our first slot on the losers list this week for earning a whopping three speeding penalties on pit road. The Phoenix pit road is a little bit different than most and tends to lend itself to more speeding penalties for younger drivers, so one is understandable. Two? We’re a little concerned, but alright. Three? C’mon man.

Mayer undoubtedly earned some “C’mon man”s from from his crew chief as he had to watch his driver get sent to the back of the field or drive back through time after time.

Our second loser of the week is actually going to be a little bit of a package deal. In the early laps of the race, AJ Allmendinger and Xfinity rookie Sheldon Creed got mixed up in a corner, and Creed made what we can only assume was a not-so-friendly gesture out the window of his car towards Allmendinger. I got a good laugh out of it, and by the way the radio sounded, so did Allmendinger and his crew. I guess you could say that The Dinger got the finger, eh? I’ll see myself out for that one.

Richard Childress Racing has knocked it out of the park with their base color schemes so far this season, and we already highlighted one of them earlier this year after Daytona in Sheldon Creed’s No. 2 Whelen livery. However, it’s time Austin Hill‘s No. 21 United Rentals ride gets a little bit of love. There will always be flashier schemes out on the track, but race after race I find myself thinking there might not be any more crisp than this pair, specifically Hill’s No. 21 car. He gets the nod for this week’s scheme, but that slick ride will always be near the top when it comes to catching my eye.

We’re now four races into the season, and a solid chunk of the contenders are already starting to make their presence felt on the circuit. Gragson has an average finish of 2.0 right now, which is absolutely bonkers in and of itself, but he’s not the only one.

Brandon Jones bounced back from a shaky start to the year to come home P2 today, Josh Berry is waiting in the wings to snag his first victory and the young gun Ty Gibbs will undoubtedly be gunning for some gold with great equipment and a hunger for a cup series ride. The one group we haven’t seen make too much noise so far this year, though, is Kaulig Racing. Coming into the year with the defending Xfinity series champion and returning a veteran driver in Allmendinger, plenty of people thought they would start off hot, stay hot and not look back. They haven’t been having bad races, but if they get cold or hit a rough stretch, the season could take a turn for the worse in a hurry. Kaulig Racing will undoubtedly be a group to watch going forward, either way.

Next up, we’re headed to some uncharted territory – Atlanta Motor Speedway. Now, NASCAR has ran at AMS for years, but after last season, the track was repaved and added steeper banking, throwing a whole new wrench in the strategies that might have once been fruitful at the 1.54-mile track. Kyle Busch took home the last Xfinity victory at Atlanta, but with Busch out of the equation now, a new face could stake their claim at one of NASCAR’s most historic tracks. The green flag drops at 5 p.m. ET and as always, will air on FOX Sports 1 and the Performance Racing Network on Saturday, March 19th.

I’ve been thinking those RCR cars were really sharp myself.

I’ve been trying hard not to be a Noah Grayson fan; he’s been such a Kyle Busch in the past. Still, he’s young, and there’s a fine line between aggressive and reckless, so I’ll give him a break. He’s talented, no doubt. And he does a heck of a burnout.