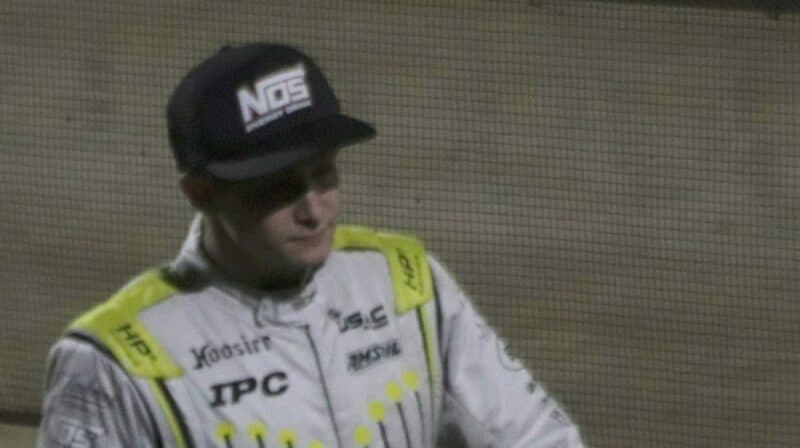 Thomas Meseraull won Friday’s preliminary feature and Justin Grant scored the richest purse in midget racing since the Chili Bowl with a $10,000 victory in Saturday’s Shamrock Classic in DuQuoin, making RMS Racing a perfect four for four in USAC national midget racing in 2022.

Now granted, Grant got a huge boost during Saturday’s feature from the fact that the top five running cars kept seeming to take themselves out over the course of the race, but there are two takeaways of note early in the season to suggest that RMS’s dominance in the midget ranks is here to stay.

One, driving styles. Midgets lend themselves to aggressive sliders more than any other form of open-wheel racecars, and the pairing of Grant and “slide or die” T-Mez fit that bill perfectly.

Second, and more important though, teamwork. Grant spent the majority of his victory lane interview on Saturday praising the efforts of his teammate Meseraull and the positive impact he’s had on the RMS operation. Personalities and talents this big working in tandem spells trouble for the field in any racing series.

2. Get used to “controversial” cancellations

The Lucas Oil Late Model Dirt Series canceled The Tennesseean on Monday the 7th, 96 hours before the late models were supposed to take to the track at 411 Motor Speedway. That was followed up shortly thereafter with the World of Outlaws late models canceling their doubleheader at Revolution Raceway Park, a decision that left the track promoter visibly unhappy.

WoO cancelled on us this weekend March 11th and 12th. Can’t even believe I’m making this post. Unbelievable.

Pretty much every track east of the Mississippi that wasn’t racing indoors canceled this weekend and for good reason: Here in northern Virginia, we saw temperatures drop 25 degrees in two hours with wind swirls that left more snow under my car port than on my yard. The folks at the Rev were lucky, as clear weather on Sunday allowed the track to host a pop-up crate late model show as a last hurrah before the track’s dirt surface is removed.

Having said that, for all the consternation from fans and the promoter over the WoO cancelation (reportedly presale ticket numbers were not favorable), I can’t fault the traveling series for pulling the plug. Throw the ticket presale numbers out the window. The reality is with fuel costs spiking, hauling a super late model rig down the road for a two-day show despite a very real threat of rainout becomes a massive financial exposure for race teams.

The full-time competitors on the WoO tour are contracted to show up at all series races, meaning they can’t play the odds on whether the weather looks too shaky to race; if the tour says we’re racing, they have to make the haul. Plus, fans are also impacted by the same fuel prices; no one’s making a four-hour trip to the track at $4.30 a gallon if the weather is at best 50/50.

There is no TV contract in dirt racing to bail out a bad gate. So as long as gas prices remain in the stratosphere, get used to seeing major races canceled early in the week.

My eyes spent pretty much the entire weekend trained on the West Coast, due in part to bad weather from the South to New England and partly because the World of Outlaws were racing at Tulare with Kyle Larson in the house. That didn’t stop me from watching Bobby Hogge IV put a smackdown on the IMCA modified field at Ocean Speedway’s season opener Friday night.

That Hogge won in dominating fashion was not a surprise; Hogge was a standout at the New Year’s show at the Stockton Dirt Track last year, one of the very first races I watched on my dirt beat with Frontstretch.

What was surprising (and concerning) was the car count. The headliner class of the evening, only seven IMCA modifieds showed at Ocean on Friday night. That wasn’t a competition issue; Bakersfield, Marysville and Tulare ran programs without IMCA modifieds on their cards this weekend. But it was a dramatic decrease from 2021, where the first “Modified Madness” race of the year drew more than double that car count.

California always seems to lead the nation in gas prices, and from the Tweets coming from Tulare over the weekend, it seems gas was well over $5 a gallon. Gotta wonder if Friday’s depleted field was a direct result.

4. Trouble at another scenic venue

Weak car count or not, Ocean Speedway remains on my lifetime bucket list as reportedly one of the most scenic venues in all of dirt track racing; apparently if you look over your shoulders in the grandstands, you’re staring at the Pacific Ocean.

Listening to that got me thinking of one of the more scenic venues in my neck of the woods, the Greater Cumberland Raceway, which as of this writing is without a promoter for the 2022 season. I’ve been looking for the Request for Proposals that this article references, and it does not yet appear to have been posted, but I did find a copy of the previous RFP that saw racing return to the track a few years back.

It’s an interesting, albeit brief, read. There’s very little in terms of actual requirements put on the promoters. That’s good from a perspective in allowing creativity, but perhaps not the friendliest means to get new blood into the promoting game? Purely educational exercise here.

5. Georgetown race a reminder that streaming is no substitute

The only track within reasonable driving distance of my home that managed to get a race in this weekend was the Georgetown Speedway in Delaware, and even that was abbreviated after the scheduled Short Track Super Series Elite race was rescheduled for October.

Sadly, I wasn’t able to make the race for two reasons; an intense physical therapy session in the morning left my ailing back very sore, and the route to Georgetown, Del. goes around Washington, D.C. Agree with them or not, I was not risking running afoul of the Freedom Convoy on the DC beltway. I worked in DC for a decade, that commute on a Friday night is bad enough on its own without protesters.

So that left me grateful that Flo Racing televises all races from Georgetown, and I tuned in on Friday to see Pennsylvanian Craig Van Dohren grab the $4,049 win in the small-block modified headline feature. And while Flo did a serviceable job on Friday night, internet issues at Georgetown meant that the stream of the first half of the modified race was as choppy as four-player Nintendo 64.

It was just the latest reminder of the limitations of streaming platforms; Flo Racing had to cancel a live stream of the Comp Cams Late Model Series opener at Boothill Speedway in rural Louisiana two Fridays ago due to similar challenges.

The point of all this? Streaming cannot and will not replace the experience of going to the racetrack in person. Human senses and technology alike will not allow for it.

6. Summer Nationals going back to Hell — and that’s a good thing

The annual “Hell Tour” schedule now appears to be complete as of last week, with the late model portion of the annual marathon event scheduled to contest 33 races in a span of only 40 days. The 2022 tour is a throwback in a number of ways, both with the most condensed slate in recent years and a return to the older points format where all races count.

Good news – more dates have been added to the 2022 #HellTour🔥 and #SummitMods schedules.

All I can say is well done DIRTcar. The Hell Tour has always been a slog, but the stop-start nature of the expanded schedule last year continually robbed the tour of any momentum from a viewer’s perspective. A total of 33 races in 40 days is harsh on man and machine, no doubt, but fewer days on the road is likely to prove a wise business decision for 2022.