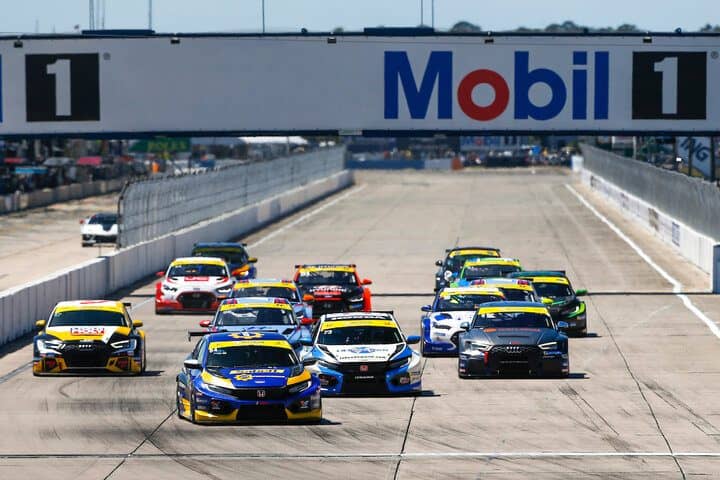 For the second race of 2022 for IMSA Michelin Pilot Challenge, the Alan Jay Automotive Network 120, there are 45 teams entered.  This is an increase of 10 teams over last season and a drop of only three total entries from Daytona.

In the Grand Sport class, there are 30 teams entered, down only two from Daytona.   Six teams that competed in the season opener in January will not race. GMG Racing’s Porsche is not entered, along with two of the three PF Racing Mustangs and Random Vandals Racing’s BMW.  The No. 40 Mustang for Chad McCumbee and James Pesek is entered.  Ian Lacy Racing’s Mustang is not entered, as is the Smooge Racing Toyota.  Kevin Conway told Frontstretch back then that Daytona was a one-off for the team in Michelin Pilot Challenge before a second assault on Pirelli GT4 America SprintX later this year.

The Daytona race winning Rennsport One is back for Sebring, but they have made a driver change.  Eric Filguerias is out of the No. 28 Porsche.  In his place will be Alexandre Premat, a very experienced racer best known for his time in the junior open-wheel ranks in Europe in the 2000s, his time as a Formula 1 test driver and his LMP1 years.  Premat will be making his first start in the series since 2019.

There are some new teams as well.  Hardpoint returns to the series after a year away.  Unlike last time, they will race a Porsche Cayman GT4 RS CS with Nick Galante and Sean McAlister driving.  The Porsche will carry the colors of Racing to End Alzheimer’s, a longtime backer of Galante.

FASTMD Racing is also back after missing the second half of last season.  They will race the No. 38 Audi R8 LMS GT4 for Max Faulkner and Farhan Siddiqi.  For Siddiqi, Sebring will be his series debut.  Faulkner is returning to the series, having not raced there since running TCR full-time in 2020 for FASTMD Racing.  Back then, he drove an Audi RS3 LMS Club Sport with James Vance, finishing fifth in points with a victory in the first race at Mid-Ohio.  The team previously raced the No. 83 last year, but relinquished rights to the number and BGB Motorsports was able to snag it before FASTMD Racing confirmed their return.

FCP Euro returns after missing Daytona.  This year, they have partnered with Ricca Autosport to field a Mercedes-AMG GT4 for Mike Skeen and Trevor Andrusko.

KohR Motorsports has expanded to two cars after running one Ford Mustang GT4 at Daytona.  While Bob Michaelian and Billy Johnson will continue to share the No. 59 Mustang, the team’s No. 60 Mustang will be shared by Nate Stacy and Luca Mars.  Stacy drove for the team in 2020 when they won the Grand Sport championship with an Aston Martin Vantage GT4 alongside Kyle Marcelli.  Last season, Stacy only made one start in the series for the American Wheelman team at Mid-Ohio.  For Mars, he debuted with KohR Motorsports at Sebring last month as part of the Trans-Am race weekend.  He will be making his Michelin Pilot Challenge debut.

In TCR, there are 15 teams entered, down one from Daytona.  AOA Racing’s Audi is not entered, as is LA Honda World Racing, which is competing part-time this year.  Ryan Eversley indicated Tuesday that the team will be back for the next round at Mid-Ohio.

No Sebring for me this year, @lahondaworld and I are going to run Mid Ohio in front of our @Honda associates instead. Next race for me is @GPLongBeach in the NSX 😊👍 https://t.co/zxbhIcXezg

CB Motorsports returns to the series after missing Daytona.  The team ran their Hyundai Veloster N TCR in the first six races of the season last year before switching to a Mercedes-AMG GT4 in the Grand Sport.  They ended up returning to the Veloster for the season finale at Michelin Raceway Road Atlanta in November.  Caleb Bacon will be back in the car alongside Kyle Raineri.  Raineri comes from Radical Cup racing and will be making his Michelin Pilot Challenge debut.

New German Performance has brought in Jay Salinsky to share the No. 44 Audi with Tristan Herbert, replacing Dr. William Tally.  Salinsky’s most recent start in Michelin Pilot Challenge was for FASTMD Racing at Mid-Ohio in 2019.  Finally, Karl Wittmer is back in the VGRT Honda Civic Type-R TCR, replacing Ruben Iglesias.

The SuperSebring weekend starts early this week.  Michelin Pilot Challenge teams will practice and qualify on Wednesday.  The 2-hour race is scheduled to go green at 4:25 p.m. ET Thursday afternoon and will be streamed live on Peacock.